Almost exactly one year ago, I was witnessing an Oolong maker in Taiwan drip with sweat as he darted around two adjoining rooms to roast, measure and taste tea. Normally, he spoke quickly and with great enthusiasm. That day, he was more extreme in his behavior.

He weighed three grams of tea at a time against a gong ge coin, steeped samples for six minutes on the dot, assessed the aroma and flavor of each sample, and then bolted back into the baking room to tinker with his roasting parameters. Throughout most of these activities, he changed the topic with great rapidity, often leaving sentences incomplete to start new, unrelated ones as he set a timer or peered, eyes wild, into a woven bamboo roasting tray.

If his teeth weren't so good, I might have been convinced that he was high on the locally preferred stimulant (a nasty, addictive drug that leaves teeth red and rotten). But it wasn't that at all. Part of his manic mood was due to the task at hand: roasting Oolong tea to the desired flavor, aroma and moisture content, and part of it was due to a concurrent, yet entirely different, task. You see, the Oolong maker felt he had a limited amount of time to convince me (an American journalist) of what he had to say (that Taiwanese Oolong is one of the best types of tea in the world). What he didn't realize is that I didn't need any convincing. The frenzied passion he displayed for Taiwanese Oolong that day was something that I could already relate to. Oolong was, after all, what brought me to Taiwan that year and the year before, careening around the island on a mad quest for more and more experiences of these beguiling teas. Like him, my fervor for tea was one of the sensory realm, which is to say one that brought only fleeting fulfillment. It was the longsuffering ardor that characterizes many a tea obsessive.

It is often said that if you ask a tea connoisseur what their favorite category of tea is, they will almost always say it is Oolong tea. (I've heard this said in various places around the world, but it's not consensus reality everywhere. For example, in Hong Kong, Puerh rules supreme over all other teas, and in Germany, Darjeeling is widely accepted as 'the best tea in the world.') There is ample reason for this. Much of it relates to the inherent variety to the tea category we call 'Oolong.'

Oolong tea is an expansive tea type, one which ranges from light oxidation to heavy oxidation, light roasting to heavy roasting, lightly twisted to rolled into tight pellets, fresh to meticulously aged for decades or longer, etc., etc., etc. It encompasses everything from teas that taste like tropical flowers and coconut to teas that taste like espresso and charred wood. Vegetal, fruity, sweet, dry, roasty, chocolatey - as a category, Oolong teas have all of these characteristics, and more. And, like other tea types, the flavor and aroma variations relate to terroir, but Oolong tea is particularly susceptible to manipulation at the hand of the maker. A skilled Oolong producer can elicit incredible nuance and depth in their teas, creating exquisite variations even within the multiple infusions of the same batch of leaves.

This immense breadth - So much to explore! So much to experience! - is part of the innate appeal of Oolong tea, and of tea in general. From the aroma (heady and floral) to the mouthfeel (buttery and rich) to the aftertaste (lingering on the palate for hours), it is easy to appreciate the sensory side of such a sensual tea as Oolong. However, to keep the sensual pleasures of Oolong (and of tea in general) as the primary focus of one's relationship with tea is to overlook the majority of the beauty of the Leaf (and, I believe, its intended purpose behind a connection to us humans).

Thankfully, the enjoyment of tea is not something to be overcome to reach a deeper connection to tea, but something to be pierced through. Much like the body (a seeming hindrance on a path away from worldly things and toward spiritual enlightenment) is often the gateway to spiritual enlightenment (through breathing exercises or yoga, for example), building awareness around your aesthetic enjoyment of tea can aid you in tapping into the spiritual side of tea. As a particularly sensual and spiritual tea, organic Oolong offers many distinctive opportunities to cross over from the physical to the immaterial.

One of the easiest entry points to the spiritual side of Oolong is mouthfeel. If you aren't doing so already, when you sip an Oolong, see how long the aftertaste lasts and how it changes over time. Forget about tasting notes and comparisons, and approach this not a matter of judgment, but a deepening of perception, a means of staying in the moment and a way of honoring the Leaf. Access the spirit of the Leaf through awareness of the sensations it activates in your mouth and throat as and after you sip it. In our tea tradition, a tea that splashes up to the roof of the mouth is particularly appreciated. You could think of it as your body's way of welcoming the tea or the tea's way of rejoicing at being welcomed into your body.

You can also apply this approach of observing change and impermanence to steeping Oolong (and other teas) many times. Listen to the tea and, over time, you may come to realize that tea patience is rarely lost by the tea that being steeped, but often lost by the drinker of the tea. 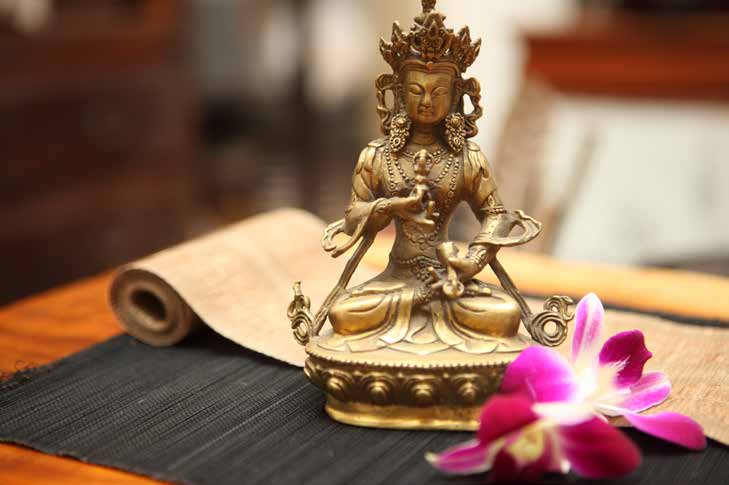 The way your body reacts to a tea as and after you swallow it is also worthy of some attention. Does your throat constrict or feel uncomfortable? If so, the energy of that tea is not right for you. (Perhaps it is not organically grown and contains chemicals that your body finds to be objectionable.) Does it glide down smoothly, relaxing the throat and moistening the mouth? If a tea slakes your physical thirst in this manner, then it's also likely to help you quench a spiritual thirst for connection to something greater.

Fully experience the anicca (impermanence) of absorbing the tea into your physical body, remaining in the moment and honoring what the tea and your body tell you when they unite in this manner. You might be surprised by their wisdom.

Once you have begun to sense more deeply the ways in which tea and your body converge, you will likely notice the potential for a sense of intoxication from tea. It can be easy to slip into viewing this as a sort of 'high' to be chased down or an adventure to add to your catalogue of experiences. I recommend avoiding these traps, as they tend to keep people in a seeking mode that can be exploitative of tea, and result in an unending search for the next tea buzz instead of an unadulterated connection with a particular tea in a particular moment. Instead, harness the energy that results from the melding of you and a given tea in a given moment. Rather than using the tea like a recreational drug, use the experience of the tea to elevate your perspective. (Or, better yet, use it to help elevate others by serving tea to other people instead of just 'getting high on your own supply.' Serving tea simultaneously promotes spiritual connection, connection with other people and connection with tea, while keeping you grounded and preventing you from generating attachment to that particular tea. More on that another time!)

During my visit to the Oolong roaster, a few weeks before my first visit to Tea Sag Hut and my initiation into the spiritual side of tea, both the roaster and I were rooted in the physical sensations of tea. However, we both sensed that this was just the threshold, that some sense of peace lay just beyond his bustling about and my copious note taking. Every now and then, the tea roaster paused his verbal onslaught and hummingbird-like movements for a few moments. We smelled the backs of our tasting spoons and slurped samples of two teas he was roasting. For a brief time, the two of us (the manic teamaker and the then-equally-manic journalist) were still and quiet.

According to my notes from that day, one tea was vegetal and roasty. The other was sweet with notes of orchids and unripe stone fruits. Now, I understand that on the surface they were very different, but underneath they contained the same thing - entryways to peace. It is simply a matter of stepping through the open door...