How to Help Your Coffee-Loving Friends Make the Transition

How to Help Your Coffee-Loving Friends Make the Transition

As teashop owners, we get a lot of customers telling us how they're tentatively attempting to decrease their coffee consumption and enter the world of tea. As tea lovers, we are bound to often come across these coffee persons on our journeys. Their numbers are increasing all the time, and we can play a part in their shift of beverage and consciousness. What can we say and do to help our friends out in an informed way?

I should start by saying that I'm not anti-coffee (and it's important to not make yourself come off that way either, otherwise your friend's reaction might be defensive). For years, in my 20s, I enjoyed a morning cappuccino-as-breakfast-substitute as well as mid-afternoon booster shot. Sure my nauseous mid-morning stomach and fatigued early-afternoon brain would hint that perhaps my coffee habits weren't optimal, but my brain told me, "Shut up, you like it, you need it! It's a habit, stick with it and don't think about it!"

One day I realized that perhaps I don't even like coffee at all - if, after all, I need to drink it loaded with milk and sugar, then perhaps I like some kind of coffee drink, not coffee itself? I took the milk out and eventually reduced the sugar to zero. Then I worked on quantities, ultimately reducing it to the equivalent of an espresso shot a day. In this way I trained myself to actually appreciate coffee, versus just robotically imbibing whatever happened to carry its name. Still, I told myself that I couldn't get through the day without at least that one shot.

Then, when I started to drink more tea, my body started to forget about coffee and I was shocked one day to realize that I hadn't had coffee in weeks. And hadn't even noticed its absence. Then I went through a few years of having coffee only whenever there was a specific desire (not craving) for coffee, and only then if I could drink a very high quality one. This taught me to listen more to what my body tells me it wants and needs, not to my habit-driven mind. Now, it's been maybe a year and half since I've had even a sip (It was in a St Petersburg café, and I did it for the romance of it all!), with no next one in sight.

Coffee in and of itself is not evil or unhealthy. If it's not a Mega Latte topped with Caramel Syrup Surprise, there are some psychological and physical benefits to coffee. Yet all too often it ends up a quick-fix solution to an unhealthy lifestyle where lack of sleep, lack of exercise, inner harmony or an imbalanced diet leads to drowsiness, a feeling of something missing or lack of mental sharpness. It's also tied into a fashionably busy lifestyle; if we're always running around and late for the next appointment, then we're important, fulfilled, in command; coffee confirms this. Coffee-loving is another part of our tendency, as consumers, to identify with products and brands. Coffee is also a social glue, bringing people together 'for a cup of coffee,' though that usually means 'we're both terribly busy people and can't spare more than this much time'; the people we meet for coffee are generally not those we like to meet for long dinners... or tea sessions.

Do we need to play the addiction card too? Addiction is an overused and poorly understood phenomenon, which in a wide scope can be applied to almost anything we engage in repetitively, and the 'caffeine addiction' line has been thrown around so much it has lost most of its meaning, but it can be instructive to ask oneself what we are dependent upon in our lives. Whether there is such a thing as addiction to tea is something we're often asked, intimating that people are aware of their current dependence and worried about substituting it for another. I believe that barring some examples, 'addiction' lies more in the person and their behavior/attachment than the substance in question and so it's difficult to say that anything absolutely is or is not addictive.

In coffee, our brains get used to not only the caffeine but the up to 500 different chemicals that are swimming around in your cup (not all of which are toxic or come from pesticides, some are even from natural sources!), and breaking the habit (like with smoking) might seem like more trouble than just continuing it. Many people experience low-grade withdrawal symptoms every morning, when they awake starved of caffeine from the previous evening's abstinence, feel tired (coffee also disrupts sleep patterns whereas long-term tea consumption has been shown to regulate them), and irritable and impossible to 'get going' without coffee. Yes, this is a symptom of what might be termed addiction. Tea does not generally cause any of this. 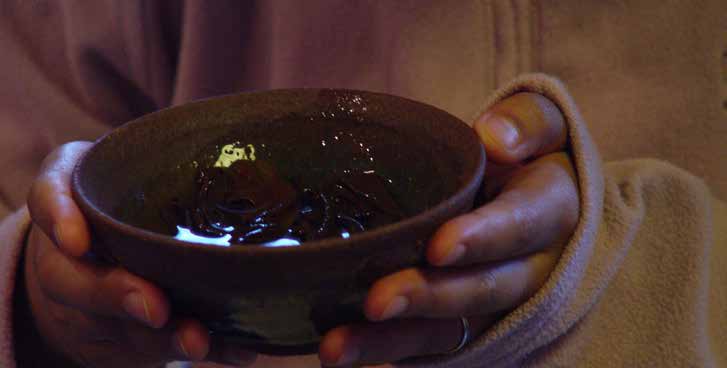 Aside from frowning and casting an "Addict!" stone at our friends interested in 'crossing over', what can we tell them about the benefits of the Great Tea Life?

Which teas to suggest they start with? Chat with them a bit to find out their own preferences. Often, even if they know little about tea, they will come up with a few clues as to what their bodies are looking for. It's difficult or even mendacious to say with certainty that Tea X creates Effect Y, which is what people often wish to hear. In general, what we're most certain of is that when someone drinks a living tea, the kind GTH sends out, the more 'alive' the drinker will feel. This happens without any caffeine pyrotechnics. Still, there are very general things to say about a few classes of tea which we've seen over the years to be recurring favorites for coffee-drinkers stepping into the tea world. Yerba mate, though it is not from camellia sinensis seems to top the list with its high caffeine content and bitter notes. But we try to steer people to the other options, like Shou Puerh, matcha and Red Tea.

Shou Puerh: Its black-as-coffee hues, earthy flavor and rejuvenating effect can pack enough punch to keep coffee simpering in its corner. It'll sharpen the mind at the same time as give a sense of solidity and deep calm. The calmer you are in general, the better your subjective state of being; once people experience calm alertness, they will be less likely to choose a slam-dunk dose of energy. It also has a mildly laxative effect, something which many coffee-drinkers appreciate out of their cup of java (though they'll rarely talk about it!).

Matcha: Whether drunk in the traditional way, whisked with a chasen, or added to smoothies or other foods, finely ground Japanese green tea is a superfood status tea which also gives people an almost immediate sense of well being and alertness. Though people may be initially off-put by the seeming complexity of preparing it, they're won over when they see that it takes less than a minute.

Red Tea: With Red Teas, the real trick is to find living, clean Red Teas like the Sun Moon Lake tea GTH sent you several months back. Those teas provide a stunningly subtle awakening morning-time, when one is so receptive to outside influences. Their inner energies merge with your own and start coursing through your body lovingly. They seem to take you into their arms and lift you up solidly though confidently. When one uses regular, commercially available Red Teas, coffee drinkers don't appreciate what they feel is a poor, shy, mild-mannered lookalike.

It's important not to add yet another unnecessary and truth-distorting false dichotomy in the world; it should never be about coffee vs. tea. Once a person is given a chance to feel for themselves how proper, clean tea works in their system, and ideally experience this in an environment which allows them to feel at peace with themselves, they will make their own choice about what is appropriate for their present states of mind.