You Are the Light

You Are the Light

We often talk about making decisions based on movement towards the light, movement stemming from a mind unclouded and a heart unveiled, movement with an embracing momentum of Love and Gratitude, Skill and Honesty. These are aspects of the first Bowl in The Eight Bowls of a Life of Tea: Skillful Means; Moral Uprightness. This type of skill is easier discussed than cultivated; on the surface level there is a paradox at play. If I am to move towards the light, how am I to do this without first distinguishing between what is light and dark (in terms of good and bad)? In a relative sense, there is always something good and always something bad to be perceived in any situation. Perception is everything in this realm. Even plants, which grow naturally towards the light, tap roots towards the dark depths of the Earth.

And so, on a trip to Sun Moon Lake I posed this question to a visiting tea friend, "How can one move towards the light?" to which he politely responded, "You are the light." I readily laughed in agreement. His answer came so swiftly and innocently. It was almost shocking. He followed by saying, "If you want to reach the target, you must become the target." In one respect, it's very complicated and contradictory, in another, very simple and straightforward. This gave me a lot to think about. There are so many layers and depths to this cutting wisdom. Becoming the target transcends moving towards it and away from anything else. How then, does one become the target?

Taking all of this into consideration as I research and write about the vegetable garden and food system at Life Meets Life, I have to take a small step back and reflect on where my intentions are coming from in pursuing this project. How can pursuing this project become a motion towards light; and, moreover, how can I become this project?

There is a lot of energy being put into designing this perennial, intensive, closed and sustainable food system. That initial energy is going to determine the final outcome. Anything that materializes does so as a result of my thoughts and intentions, so it is important that those thoughts and intentions be as pure and full of love and laughter as possible. Any action that comes through me is a corporeal replica of my own mind.

In one sense, I want a thoughtful foundation of Love from which all actions can stem. Ever increasing thoughts of Love will lead to ever increasing acts in accordance with that Love. Wouldn't you like to eat the fruits and vegetables grown and nurtured by someone in alignment with Love? Wouldn't you like to know that where your food is coming from is a sacred place governed by responsible agriculture practices that are harmonized with Nature? I would! And we will...

In another sense, I want no thought; I want to step out of the way so that Love Herself can act through me. May I be a clear vessel through which Natural farming and land stewardship can intuit. No mind means no interference, no trace, no ego. It means no action, in the sense that you are the action, not the one performing it.

In light of all of this, I ask myself: am I doing all of this out of love or out of some dissatisfaction with the way things are in the world? Am I growing food because I love to be at play in the soil or because I think more people should know where their food is coming from? Am I composting because I love transmuting organic matter into life-giving humus, or because we shouldn't waste kitchen scraps? Am I striving to be more sustainable, self-sufficient and Earth friendly because I have a deep reverence for the interconnectedness of all things, or because it's what we should be doing in these times of large-scale irresponsible agriculture management?

In truth, my intentions flow between both arguments: To some degree I pursue this project because I love Earth Stewardship: I move in the direction of light. To another degree, though, I do this because I feel things should be or should not be a particular way: I move away from the dark. To consider that a particular situation should be other than what it is, is to assume that I know better than the great intelligence that keeps this crazy universe swirling and unfurling. Call that great intelligence "God," "Spirit," "Science," "Reality," or anything else you wish; it doesn't matter; when you argue with it, you lose only 100% of the time. Everything is happening exactly as it has to for reasons so intricate, so intelligent that we will never understand them, nor do we need to. 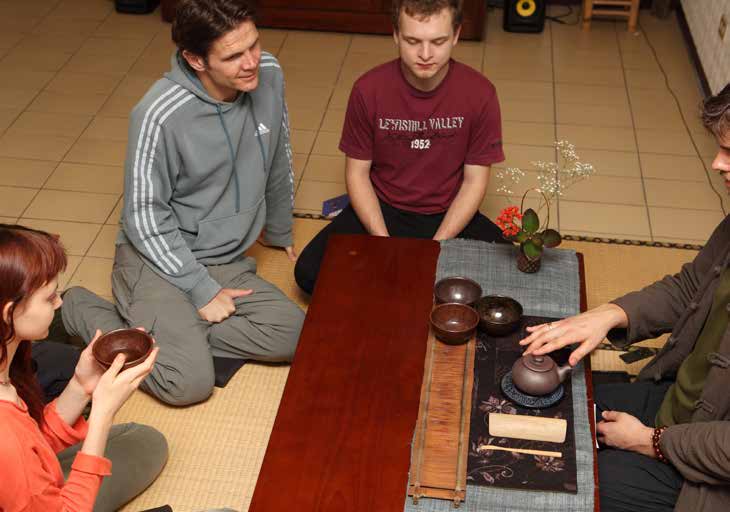 What happens when you surrender to Reality as it is, when you accept things as they are, when you have faith in the unfolding of the universe? And what happens when your intentions and actions dance alongside surrender and faith? Can you even move away from or resist anything? You're just dancing after all, surrendered to the forces that move you, faithful that your partner will catch you. When there is no resistance, one can only flow with the current of change that is our reality. A waterway moves down the path of least resistance, not away from the peak of the mountain. This is its Dao. When there is nothing to resist and you move with the momentum of Love, you can only move in the direction of Light because that will be your Dao, and some might say that in those moments you are the Light.

Cha Dao offers all the means necessary to cultivate the qualities that put us in contact with the realization that we are the light; those being Love, Laughter, Surrender, Faith and Awareness to name but a few. A life of tea invokes meditation, gratitude, physical wellbeing, cleanliness, community, connection with Nature and development of gongfu. Know that within this tradition and with your support, the food system, or food sanctuary rather, at Life Meets Light will be as much as possible an unfolding product of movement towards the Light.