My trips to the City of Angels are always a whirlwind of service, soul family, deep bonds and even deeper personal transformation. Sometimes it's difficult to process my own insights amidst the fury of events, ceremonies, workshops and, of course, tea with some of my favorite people on earth. I always spend a week afterwards resting and working through what I have experienced, the challenges I've faced and opportunities to be a better servant of tea and this tradition. No matter what the challenge(s), my trips to LA always leave me inspired and uplifted. And it's no wonder I keep going back, even when I have standing invitations to go elsewhere.

This trip was even more magical for four powerful reasons. First, Joyce went along with me. It was the first time she had ever been to LA, and also the first time she got to see what I do when I am away. Knowing how hard I work and meeting the community we are building helped to ease her mind about me traveling so much, and inspired her to participate in the center more, knowing now that the ones who come here leave and continue to plant seeds in other places as well. She sat in her first workshop and was deeply moved, later expressing that it was one of the major highlights of the trip. It also helped that all the soul family there showered her with much-deserved love and fun. She had a great time and told me on the way home that she connected deeply with some of the community there, like me recognizing that she had another home.

The second incredible aspect to this trip was going to visit the Hopi Indians in Arizona and making tea for an elder at what they consider to be the center of the universe. They are an amazing people - star beings - with otherworldly eyes and a simple, direct language that somehow communicates great depth and experience outside of any content. I left feeling confused about what, exactly, I had learned from Gerald, the Shaman and Hopi leader, knowing, however, that I had learned so much. It is hard to put a finger on the content of what I learned, as the trip was more of a shift in perception. And that, I suppose, was the greatest lesson: that the tea ceremony also can be a contentless, silent space and that a tea ceremony/workshop can also focus more on shifting awareness and perspective rather than adding content or information to people. I had already been focusing on this, but the magic of Hopiland inspired me to make this overt and tell the participants that the content wasn't as important as one's outlook during and after a workshop. 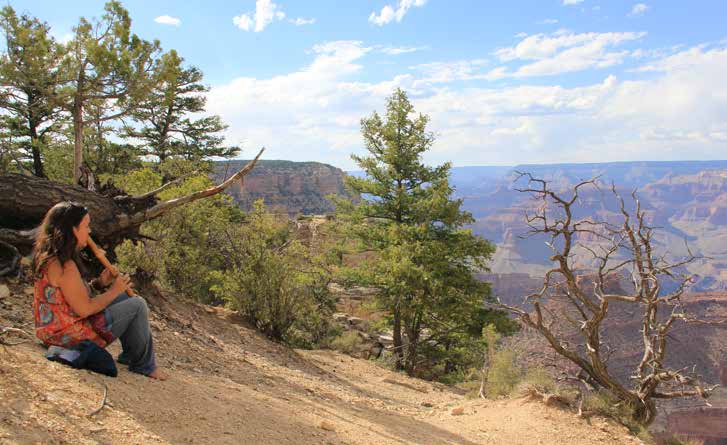 The Hopis live on three mesas in the deserts of Arizona. A big part of why they have been left alone up to modern times is that the area is remote and rather inhospitable. It is essentially a desert. And the Hopi dry farm, which means no irrigation. The rain there accumulates in smaller gray clouds, and it only rains in one area at a time rather than the entire gray-sky downpours we're used to in Taiwan. This taught me one of the deepest life lessons: when our life becomes too luxurious, we stop relying on the Creator. The Hopi live in such an inhospitable place in part to preserve their reliance on Spirit and to preserve the juju they use to pray for rain, corn and to avoid unnatural death, like being bitten by the many rattlesnakes around. There is a faction on the reservation committed to progress and modernization, but for the most part it felt as if the traditional arts, ceremonies, lifeways and worldview were still thriving amongst some of the Hopi - a worldview that sees our life in terms of harmony with Spirit and Nature, and utilizes ceremony, ritual and medicine to motivate Nature and to shift one's orientation towards the trials and tribulations of existence. There is great truth in this. To thrive spiritually, we need a certain degree of hardness, simplicity if you will. When a bed is too soft and comfy, it is more difficult to wake up early and meditate. I was deeply inspired by the Hopi commitment to live in such an amazing place - pristine and vast - and to do so with determination and Spirit, not buying into a lot of the negativities that the mainstream society around them is selling.

We shared tea in silence out on the cornfield, surrounded by the corn - their children - and one of the largest and most open skies I'd ever seen. There was nothing that needed to be said. You don't need to tell a shaman who spends his days in a desert cornfield praying for rain that this medicine can help connect him to Nature. He understood. We then shared some delicious food and some tobacco, smoking prayers for the world. He blessed us and said that the ceremony had affected the entire reservation. Around that time, one of the brightest shooting stars I'd ever seen streaked across the entire sky, bursting in a rainbow spasm of crystalline dreams. And for a moment, I wasn't a person in a desert - I was the desert.

The third life-changing aspect of this trip to LA was that my dear brother Steve showed up from Estonia for a few days to meet all the beautiful people there. This was the first, historic connection of two of the tea communities that are growing around the world. I hope that this is the beginning of a trend, and that the Russians will also come to LA and the Americans to Russia (or Spain to see Antonio, etc.). It was really powerful to see our tea tradition meeting in an international way, and sewing seeds of brotherhood even amongst such distant friends. And how easily they connected, as if they had known each other all along. Colin mentioned that a couple weeks before when he heard that Steve was coming he realized that it seemed as if an old friend was coming over to hang out, rather than that he was meeting someone for the first time. That made me a bit moist-eyed, confirming our life's work and the power that tea has to bring people together in heart space.

Last but not least: my dear brother and sister Jarod and Emily got married, which was a huge part of why we had gone to LA in August in the first place. They spent a lot of time planning and preparing for their wedding, and they are both gorgeous souls, so of course it was one of the most amazing weddings I have ever attended. It lasted two days: the first day we held a tea ceremony, where they shared their love nonverbally. The entire crowd of family and friends, many of whom had never had tea before, sat in silence while they shared three bowls together, and then the couple served three bowls to the audience, which we all shared in so that we too could ingest some of their love and be inspired by it. After that, people were in a heart space - having just drunk their love - and shared many heartfelt blessings and wishes for the new couple.

The wedding itself was stunning. It was in a Japanese Zen garden and officiated by Emily's stepmom, who did an amazing job: she asked us all to be silent for a minute and evoke great presence to witness this amazing one-time sparkle shimmering on this great ocean of being. Their ceremony was incredibly honest, and a beautiful reflection of all they both are - humorous, serious, intent and passionate for each other and life. I literally laughed, cried and shouted for joy in thirty minutes, leaving inspired to live and love more.

All of the events this trip were a huge success. We had several large parties and workshops spread all over LA. We raised a ton of financial energy to go towards building Light Meets Life, had many people become members of this Global Tea Hut and raised a lot of awareness for all our work. We also deepened our bonds with dear friends. I got to know many of you better, and feel honored to have you in my life. I cried a few times during the trip and I do so now - deeply grateful for your presence and for the amazing community of tea brothers and sisters we have created there in LA. If anyone in this Hut is thinking of heading to LA for any reason, reach out to this amazing group of people and you will be so happy you did. I feel uplifted to be friends with them, and going there these last few years has taught me so much about myself, tea and spirit. If you've caught just a shimmer of the warmth, love and growth that I experience traveling to LA ever single time, then you know why I keep going back, even when the world and circumstances point to other points of the compass. My internal heart and my own oracle always confirm what my experience later proves: that LA is home.

Most of the pictures throughout this issue are from our trip to LA. They were masterfully taken by Ganga the Great. Enjoy!