How do you embrace a loved one? How do you hold a baby? How do you pick up an antique or reach for the sky? And how do you as a Chajin (tea person) hold your tea bowl? We hug and embrace with two arms and hands. We cradle a child with two gentle and caring hands. We cautiously handle the antique, reach toward the blue beyond, and hold our tea bowl - all with two hands.

During one of our talks at the tea table in our main tea hall, I was reminded of the Five General Brewing Principles. Without going into any detail, they are; first, divide the table in half, the right hand manages the right side of the table and the left hand, the left side; second, hand motions in preparing and serving tea should be towards your center, that is, when possible the right hand moves counterclockwise while the left hand moves in a clockwise direction; third, the off hand holds the kettle and the dominant hand holds the tea pot; fourth, never, ever lift the kettle until your heart is still; and fifth, stay with your tea completely, from the time you lift the kettle to the time you serve your guest.

To better understand these principles, among other aspects of a life of tea, I was given some homework: y master asked that I use two hands wherever possible for one full day. Using my hands in unison to perform multiple tasks was still considered using both hands. And for all practical purposes, tasks like brushing my teeth didn't require two hands physically on the toothbrush itself, but at least the off-hand could in some way be in contact with the motions of the brushing hand. Holding my wrist, for example. It wasn't meant to be a burdensome task, but a simple, practical experiment. While the results of my homework were insightful for life at large, I'll keep things tea-related because, ultimately, I was asking myself how this applies to the above-mentioned principles. How will this bring me closer to Tea? And how will this experiment deepen my connection with the Leaf?

I was surprised right from the beginning. Simply put, I had to invoke more awareness in almost everything I did. Full stop. That immediately lent itself to greater respect; and so the teachings of this homework conveniently started with one of the four virtues of Tea: Reverence. As a result of using two hands, there was automatically an increased degree of respect in my life. Even if I wasn't using two hands, I had to keep it in mind that soon I would be doing something where normally one hand would be enough, as it were, but where two hands could be engaged. Opening a door, brushing my teeth, picking something up or putting something Article by Shane Marrs down, reaching for the kettle, pouring tea, etc. That alone raised my state of consciousness and set the bar for my entire day. Unexpectedly, I became much more inwardly focused. 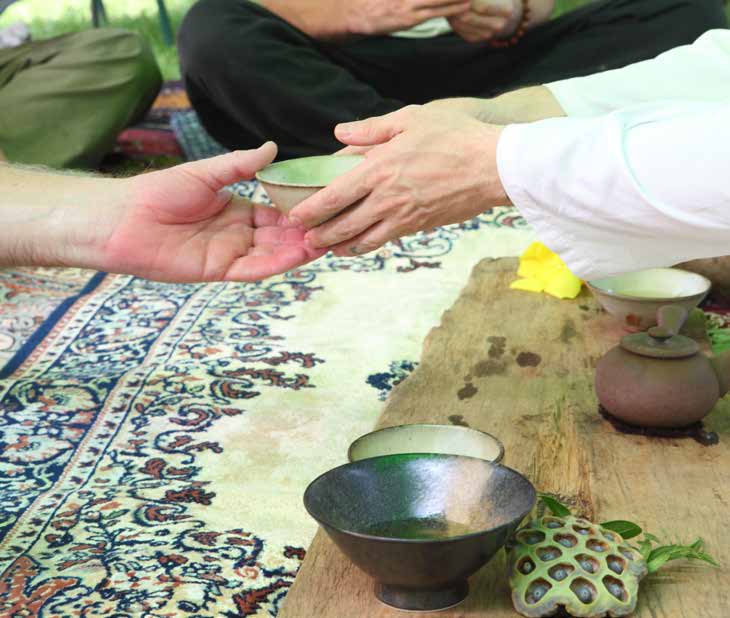 When you have to go out of your way to engage two hands in an activity, necessary or not, I realized there was a shift in consciousness towards greater awareness, focus, attention, and respect. I also found that most activities required slightly more time, which added up over the course of the day. When I spent more time doing things, I didn't lose my patience though, because the increased level of respect and awareness far outweighed that mundane habit. Things actually became more enjoyable. I became slower and calmer. The essence of tea and meditation can both be described as calm and aware. I was seeing for myself the essence of tea and respect as a virtue of tea in virtually all things I did. Calm, aware, reverential...

I'd ask that you watch our video on Youtube: Side-handle Pot Tea Brewing. You may have already done so, but watch again and pay particular attention to how Wu De rests the teapot, the tea bowls, and the water basin on the table. When he's not physically using two hands on the teaware itself, his off-hand gestures speak volumes. It reveals a love and respect for what is being done. It brings more meaning to the interaction between host and guest, leaf and human.

The interesting thing I found while brewing tea on this day was that there wasn't so much of a difference in the actual preparation and serving of tea as where I focused my attention. Very often I am already using two hands to prepare and serve tea; ladling water into the kettle, cleaning and warming the bowls, guiding tea leaves into the pot, gesturing with open hands for everyone to drink, etc. But now there was an increased awareness in these actions. And where there was once only mechanical flow between two hands in unison there was now awareness of it. Why is this important? Consider that before humans, flowers were still and beautiful, but our awareness allows beauty to know it's beautiful - flowers know they are beautiful - and beauty that knows it's beautiful is more powerful than beauty alone. Two hands that know they are graceful at the tea table are more powerful than graceful hands alone. 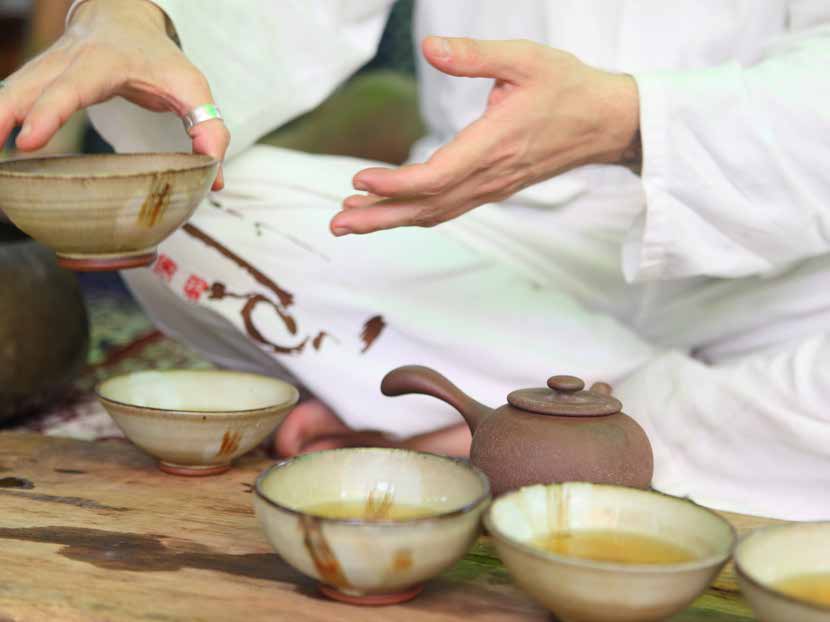 I was reminded of a guest who inquired about using two hands to hold their tea bowl. In fact, our guest went on to suggest that the same mind-set could be achieved while only using one hand to hold the bowl. Beyond the experience of my homework, I can only ponder the truth in what was said that day. After all, in one very blunt sense, who is to say an individual with only one arm couldn't invoke just as much calm, respect, and awareness in any activity of their life, let alone drinking tea? What the guest said was actually very deep. It suggested that my homework is at least twofold because the homework itself was simply a pointer towards the act of using two hands, and the act of using two hands is also a pointer, a signpost if you will, pointing towards the shift in consciousness that is always readily available to us. Of course, in that sense, two hands are not necessary to hold your tea bowl with reverence. The action is not so important as the intention behind the action itself. It really is a state of mind, and the act of using two hands is simply a tool, revealing to us a path to get there, which is really right where you are. But, in the meantime, until I have mastered the ability to shift my consciousness in this way at a moment's notice, the tool serves an important role and should not be overlooked because one intellectually understands the essence of it. As I mentioned in last month's article, you are already enlightened, but that doesn't mean you don't need to meditate. In another example, when you start to understand the rules, does that mean you know when not to follow them? So long as you have to ask yourself, do I need to meditate? Should I break the rules? Keep meditating, keep following the rules, and keep using two hands as a tool to bring about more reverence, awareness, and meaning to your life of tea. When you've really reached the point at which you no longer need to use two hands when holding a tea bowl, you'll not have to ask whether to do it or not because you'll already be in that state of mind. When you're in the "right" state of mind there is no need to ask if what you are doing is right. That would be like consciously asking yourself, "Am I conscious?" You'll already be there and you'll no longer need the service the tool once provided.

You can see for yourself; it's a simple enough experiment: compare holding the bowl with two hands versus one hand. If there's any sense of what I've described in this article or if any question arises as to why there is a difference, continue using two hands! The tool is serving a purpose. If you're honest with yourself and you notice no difference at all, this could mean one of two things: you've got it (and all the more power to you! I celebrate that in you); or you could possibly cultivate an increased level of sensitivity.

As a former tree planter in British Columbia, I fully appreciate balance! For anyone who hasn't tree planted before, the dominant hand usually holds the spade and the off hand, the treelet. Tens of thousands of planted trees later, imbalance manifests in myriad ways. Tendonitis in the wrist, damaged planting fingers, back cramps, etc. Most disturbing is the 'claw,' a clenching of the hands as a result of holding the shovel too much and too taught. Switching hands and 'planting amby' as they say, though slow and clumsy in the beginning, evenly distributes wear and tear over the course of a season. This style of planting brings about mechanical balance, relieving and even preventing much of the physical stress associated with tree planting, and ultimately leads to more graceful movements, improving your economy of motion.

Everything in life is about balance. We inevitably sway this way and that along the tightrope of life, only to achieve a moment's balance in which we can take the next step forward and the process continues. Of course, tea is also about balance, both inner and outer. That's what so much of the five brewing principles are about. They remind us that the body, heart, and mind should all be balanced, centered, focused and poised at the tea table. If we mainly use our dominant hand at the neglect of our off hand, we lose the fluidity, grace, and skill achieved when both hands work in unison. Since external actions are a reflection of one's inner state of being, she who brews tea with great skill has also cultivated herself with great skill. A balanced brew reflects a balanced heart. This is one reason tea is such a powerful medium for transmitting wisdom between guest and host, student and teacher. Whatever expression of balance or imbalance, of the body or the mind, will come through in the tea.

One more experiment that I'll suggest to further articulate the simple joy of using two hands and the benefits it has to offer is that of shaking hands in introduction. The next time you encounter someone for the first time, which just so happens to be every time at the tea table, use both hands to introduce yourself. Notice how much more connected you feel; how much quicker the onset of brotherhood or sisterhood courses over you. And in respect, I'll take this opportunity, as you read this article which has been passed on from my hands to yours, to bring my hands together once again and bid farewell in a deep, reverential bowl...