The Source of Our Actions

The Source of Our Actions

On impulse, I decided recently to participate in a weekend workshop on yoga and meditation. I was interested in the particular approach of the instructor, whose impressive history of having spent most of his 20s and 30s studying with various Kriya yoga and Eastern tantric gurus aroused my curiosity. Not only did I feel like spending time with a wise person as a way of further cultivating (unleashing?) my own inner wisdom, but his teaching of how specific yoga asanas are inextricabley linked with consciousness-expansion was of particular interest to me.

Many yoga schools emphasise physical poses and stretches, add in some peace-of-mind sivasana at the end and treat yoga as a sub-branch of athletics, as opposed to as an extension of meditation. However, yoga poses seem to have been developed mainly for strengthening the alignment with the higher self, to use the physical to go beyond the physical. The word 'yoga' itself, Wikipedia tells me in black and white, is Sanskrit for 'union with the divine'.

I was also hoping for an event (like this workshop) to kick-start my own dedication to meditation. While I have incorporated quiet time, mostly with a bowl of tea, into almost each morning's practices, they are often neither rooting/grounding nor, thanks to streams of mind noise, pathways to Source. (Something tells me that if I continue rushing about some 14 hours a day, simply adding on 30 minutes of quiet time won't quite do the trick!) Many practitioners of meditation at some point get discouraged as initial mini-satoris and waves of deep peace get eventually replaced with the usual streams of mind noise; incorporating quiet time into everyday schedule does offer inumerable beneficial effects to be sure, but without occasional guidelines, reminders and pointers, not to mention strict commitment to regular practise, long-term benefits are questionable - at least they are less than they could be. This is part of a disappointment many encounter after long bouts of trying to achieve what they had seemingly been promised: Peace!

Yet the point of this already-rambling tale is about our daily selves/ego/Little Me/Monkey Mind (take your pick) versus our higher selves/Source/love & compassion (take your pick, and let's forget for a moment that there is ultimately no difference between them, thus no 'versus'). It's about the struggle we all encounter as we try to act from a source of 'higher self ', and the erroneous judgments we make about others on the same path.

When I met the aforementioned yoga teacher a few days before the workshop, I found my mind going into analysis mode; my years of psychology training and observation of human behaviour instantly picked up on several traits which were less than masterly, less heavenly and perfect than what seemed to be hinted at in his biography (or what I had let my mind expect after reading his impressive biography). I tried to observe the jugding mind from a little distance, to wedge in some space between Me and my judgements, and followed an intuition to attend the workshop nonetheless.

Of course, those aspects of personality I picked up on were present indeed in the workshop, but so was a lot of the richness, wisdom and depth hinted at by the biography. I was reminded (once again!) of how we are all struggling on this road to self improvement, how we are all fragile humans who will make mistakes, stumble and trip back into reaction, into Little-Meness. Why expect perfection in others (actually why expect anything at all from others?) when it is so far off in ourselves? We are all trying in our own falible ways.

Wu De once mentioned that it's not about being perfect all the time, it's about always making the proper adjustments. Like a tightrope-walker: he doesn't sprint across the rope in some perfect, flawless single ballet move. Instead he takes a few steps, wabbles, then adjusts, keeps going, loses balance, adjusts immediately, keeps going... This is an apt analogy to our own personal development and it does no one much good to harp on the times we or others lose balance or stumble, or to see their entire selves as comprised of that stumble and trip.Yes that might be the lower self, the Little Me in free-fall, but let's instead pay more attention to the re-adjustment - that's the Higher Self in action, and what beauty in those moves! 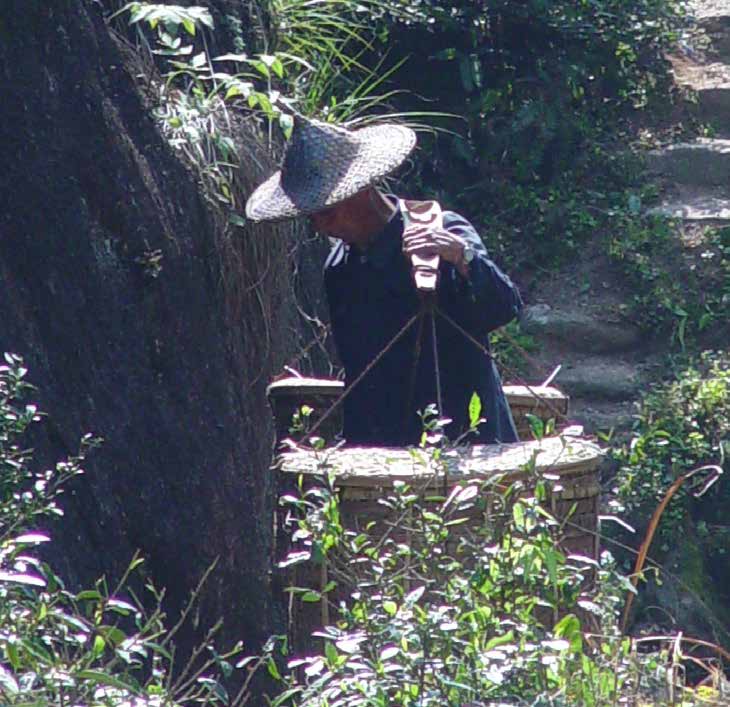 So back at the yoga seminar, this teacher had many moments of truly inspired Higher Self, when the brain was successfully turned down a notch and he was speaking, sharing not from a space of ego or from the personality of this lifetime, but from a deeper wisdom. And in these moments I, as well as the others I'm sure, listened and responded from a higher source as well. That higher self resonates and responds to the higher self exhibited in others. What a gift!

I was asked to serve tea at this workshop, a nice challenge of coordination and organization for me as it was the first time I alone served so many (16) others at one time. There was some silence in the tea drinking, but a number of questions were directed my way, and I found myself responding to them with words I had never really spoken before, very calmly and with sounds seemingly not being actively spoken by me, or anyone in specific. I was not nervous, uninterested in making any kind of appearance or impression and this cleared the way for some amount of depth to be shared.

I later reflected that within the space of an hour, I myself had acted first out of Little Self (forming mental judgements about the teacher, analyzing, complaining that I should have done something else with my rare free time than be there in the class) and then after, apparently, out of Higher Self. All that had changed was an opportunity and space to act from that higher realm, which I had given myself through this opportunity to serve tea. This contrast in states of mind was so sharp I felt ashamed that I had not given the teacher the space and opportunity to act from his higher self by relating to him only as one ego to another, personality to personality, body to body. When spirit meets spirit, what heights can be attained! Even when spirit meets ego/personality, the spirit gives an opportunity for the ego to transcend, and most will rise to the occasion. This is among the deepest gifts we can offer others through tea service. Only through tea? No, basically it is through presence, Calm Being and recognition in others of that same Calm Being. However, as we all know, serving tea helps us cultivate that.

So, to whom do I offer this next steaming cup...?