Where once a sage's journey to the source of spring water was but a trek beginning and ending in the wilderness, enduring as it may have been, now we begin in the concrete jungle. Where once animal trails and thickets of old growth trees pointed the way, pavement and roadside signs now guide. Where once a wizened old hand-cane supported such a trek, petroleum powered vehicles trek for us. Though there may be streetlights, front-loaders, houses and handrails along the way, where once there would have been sunlight, great beasts, wild habitat and moss-laden forest floors; though there may be sewers, stairways, ruckus, faucets and infrastructure now, where once there would have only been streams, cobblestone paths, birdsong, ladles and visceral Nature - the journey remains the same. The content along the path has altered, for better or worse (only human thinking makes it so), but the path itself remains for all to walk and, fortunately, it still leads to Nature's bountiful springs.

As contrasting as these paths may appear, for surely there are still springs with paths greatly resembling those of old, we are presented with a new opportunity: doing within when doing without. An inner cultivation of equanimity and awareness is required in lieu of access to the outer beauty of Nature. It's the water we're seeking, and no path, no matter the content, can be held accountable for one's intention along that path, which is to source quality water for Tea - Tea to be served and celebrated as a medicinal medium that draws us ever closer to the inner beauty of Nature, which is always accessible.

Just recently, my Tea brother and I made an early morning trek to source what we consider to be Taiwan's best spring water. We left particulary early, at 4AM, so as to reach the spring at a time when it was influenced by the Yang energy of the rising sun. Indeed, we powered our way to the foot of the mountain path by motorized scooters, passing over bridges, through tunnels, up paved and winding roads and past construction zones. Finally arriving at the point where scooters could bring us no closer, roughly six to seven hundred steps separated us from some outstanding spring water. I walked the gentle sloping path to a temple gate. Flowers dress the temple's entrance in ample arrangements. Always, it would seem, there is a great deal of temple activity: prayer, channeling, Teaching, purifying and fortune telling, I can only guess at the foreign looking rituals. It is here where we access the mountain's bountiful spring water. 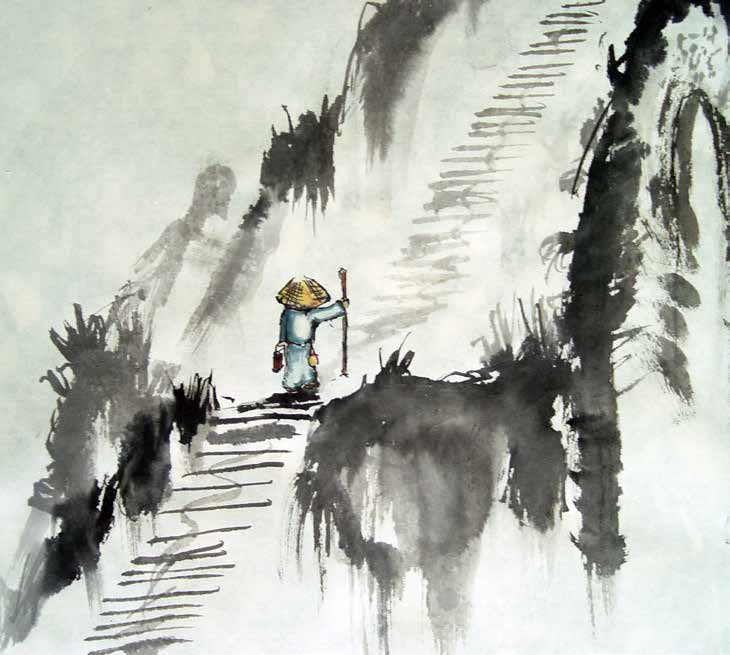 One small drink, possibly whilst looking about the valley below from the temple's terrace, is easily enough to slake one's thirst. Swiftly and smoothly this water enters your body and hydrates. It has all the fine qualities of good drinking water: It has a smooth and rounded mouthfeel akin to oil or milk. It splashes to the upper palate, evenly coats the mouth, and comforts the throat when swallowed. It causes salivation, quenches one's thirst and lacks any flavor. It is also important that the water is subject to some movement, has a neutral Ph of about seven, and has a certain level of dissolved minerals. Drinking water like this is akin to drinking fine Tea itself.

One of the temple dwellers, taking notice of the unusual foreigner filling up his water container at 5AM, took it upon himself to brew some Tea. He silently gestured that I join him. It was a beautiful example of someone wanting to simply share a heart space, share a connection with another human being. There was no attempt to display conceit or show off. The Teaware was simple and the method of preparation simpler. The intention was there, and that was all that mattered. It's a bit of mystery that Tea, over the course of history, has played such an integral role in fostering human relations. What is it about Tea that makes it the second most consumed beverage in the world? Why has it been there to promote peace and settle wars? Why is it a gift fit for emperors and at the same time a medium through which social class is nullified? What quality in Tea lends itself to being regarded as the greatest of all medicinal herbs? Why this plant and not some other? I don't know, but the fact of the matter is, Tea is the second-most consumed beverage in the world, it has been there in times of peace and war, it was regarded as the greatest medicinal herb, and while such highly regarded qualities might exist in other plants, they are found in Tea, and to this day Tea continues to connect and heal us. Could it be that coffee or an herbal infusion might also offer what Tea does if enough mastery and appreciation were dedicated to them? Or is there something more to the specific relationship between humans and Tea? Did those Tea leaves, so long ago, mistakenly fall in to Shen Nong's vessel of boiling water? Or was there a conscious effort on Tea's part to reach out and share with us a connection that was always meant to be? More and more I am led to believe that this particular plant really was designed to commune with man. It's beautiful to think that such evidence points towards a unique and intentional relationship.

We shared silence together for a few minutes, the common language of Tea the only tongue that spoke. We finally did exchange what few words we could. He asked how old I was and made mention that he was eighty. I tried to convey that though our separation by age was great and though I don't speak Chinese, the common language of Tea could still bring us together. It probably sounded more like, "You old... me young... can't speak... we drink Tea." He just gazed at me and we drank some more Tea. The nonverbal quality of Tea in that moment spoke volumes more than my broken Chinese - just another example of Tea's ability to transcend the barriers of language, age, and culture.

The abrasive surface of time revealed more of itself now in his darkened skin, weathered hands, graceful, slow motions and raspy voice. I paid my respects and made my way back through the temple's entrance and down the stepping stone path.

Because water is the most important element of Tea, spring water with all the qualities mentioned above is ideal. If you're simply not sure of where the nearest spring is, you can try www.findaspring.com. If you have access to spring water already, that's perfect. Sourcing a spring is also a great excuse to go out into Nature, not to mention that it will save you money and reduce the negative impact of buying bottled water. The physical journey of fetching spring water is worth celebrating and will deepen your connection to Tea.