Tea as Art: Part I

Tea as Art: Part I

Serving Tea is, in many ways, an art form. As someone who was trained in the arts, this is something that initially drew me toward Tea nearly a decade ago, and something which I have only recently begun to re-examine as a fundamental aspect of my Tea journey.

This month and next month, I'd like to discuss two aspects of Tea as art. The first is a topic that is given a good deal of consideration by artists the world round. It's the process of creating art, and the decisions, work and impact involved in each step along the way. The second, which I'll address later, is how working with this process of creation can elevate the act of serving Tea into the spiritual realm.

To begin, let's outline the main facets of creating art. There are six main aspects of artistic creation (including, of course, serving Tea). These are:

Idea / purpose
why you make art / Tea
Form
for us, gongfu, bowl tea, etc.
Idiom
the genre or subject matter of the art
Structure
the logistics and practical aspects, such as what to include or leave out, and how to carry out a tea session skillfully
Craft
mastery, proficiency in problem solving, ability to innovate skillfully, etc.
Surface
the final touches which are most clear to those first drinking tea with you

You could think of these aspects of creation as being layers in a sphere, with idea / purpose being the core, and surface being what is apparent immediately to someone experiencing the art form.

For most people, what initially piques their interest in Tea is the surface. This aspect of Tea includes a wide variety of sensory input, such as aroma, flavor, aftertaste, the appearance of the teaware, the music played or ambient sounds heard, the atmosphere of the tea space and the speaking abilities of the brewer. This aspect of Tea is rich and varied, and it's no wonder that many Tea lovers get caught up in it for years before probing the deeper levels of Tea. However, to get stuck on this level of serving Tea and appreciating Tea is a trap, one that severely limits one's ability to serve and appreciate Tea.

Generally, when people begin to get past the surface level of Tea, they get into the craft of preparing Tea. Unfortunately, at this stage there is some confusion between basic skill and mastery. It may be tempting to seek out formulaic approaches to Tea preparation, and to feel that brewing Tea according to specific instructions is the way to make the best Tea. However, this is not a skillful approach in the long run, as it limits one's abilities to problem solve and innovate, and ultimately keeps one from attaining mastery. As a student of the Leaf moves along the path of Tea, he or she will likely find that cultivating one's own connection to and intuition surrounding Tea is a far more skillful way to hone one's craft than using specific brewing parameters, i.e. the usual time-temperature-amount model so heavily promoted in the West.

The cultivation of craft is something that can be done to a certain extent on one's own. However, as one progresses on this trajectory, he or she will reach a point at which structure becomes more and more important, and this stage logically coincides with serving Tea to others. This is where intention begins to come into play, and where sequencing, aesthetic and specific approaches to Tea preparation are used to relate to one's self and others. The structure of a tea session may be utilized to evoke a particular mindset or ambiance, to communicate a particular feeling or to transmit a particular understanding. But from the specific chaxi to the type of heating method used for water to the absence or presence of music and conversation, the way a tea session unfolds in linear time and each aspect of what is included or omitted in a given session will have an enormous effect on all its participants. 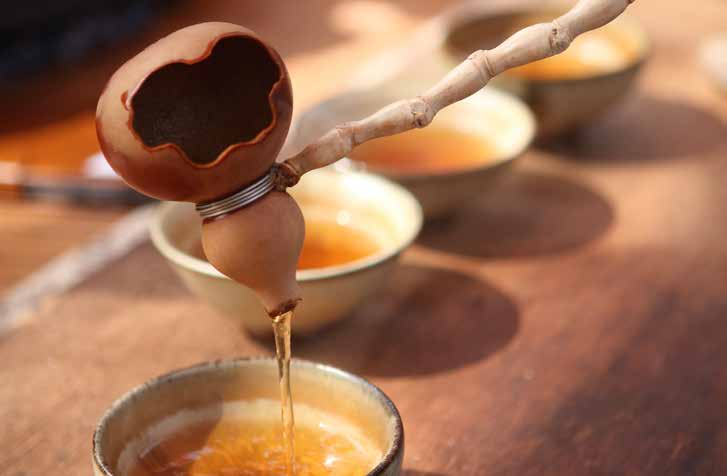 Considering and mastering structure opens up a lot of questions and opportunities for a Tea server, and almost inevitably leads into the exploration of idiom. Within this tradition, there are several ways we can think of idiom as applied to Tea. The most obvious is the focus on organic and/ or Living Tea. When examining structure and its impact on participants in a session, the reasons for utilizing only organic Tea as a medium for creative expression become even clearer than they are when drinking on one's own. (If you haven't made a commitment to organic tea on your own already, continue drinking bowl tea to understand these reasons experientially.) But beyond that, questions of idiom deal with modes of expression which begin to emerge as one becomes more founded in his or her Tea preparation. One person's tea sessions may lean toward the light and airy, and utilize teas, music, chaxi and other elements which support that. Another person may have an innate tendency to hold tea sessions which evoke Nature, and may augment that with a style (visual or otherwise) that reflects Nature. And yet a third person may have a more austere, Zen-influenced approach which is communicated through everything from the way the tea space is arranged and adorned to the clothing he or she wears to the overall tone set since before the session even began.

Now, when you have worked with these different aspects of Tea preparation for a while, the subtleties of form begin to get clearer. In the realm of Tea, form refers to the style of Tea you opt to serve. You could prepare bowl tea for connecting more directly with Nature and for cultivating equanimity. You could whisk tea with the intention of elevating mindfulness, or you could brew gongfu for cultivating mastery and refining Tea preparation to its highest form of expression. Each one of these manifestations of Tea is equally useful and valid, but selecting appropriately for a given tea session requires ample experience with and understanding of each one.

With a strong focus on form, it is possible to be a revolutionary in Tea, and to completely change the way that people experience Tea. However, it can also be easy to lose oneself in the world of form (pun intended) and to lose sight of the traditions and intentions that have been behind serving Tea since before there was human consumption of Tea. This is where idea and purpose become essential to serving Tea rather than just serving tea. For some people, the reason for making tea is to focus on form, and that can be useful for spreading tea around the world and for changing the way people see tea. However, within this tradition, there is something much deeper to be considered when deciding how you want to approach serving Tea. It raises a question as simple as it is complex: Why do you serve Tea?

If, for example, your primary purpose is to make delicious tea, than this decision will play out in many aspects of your tea. It may mean that organic tea is not a requirement for you, or that the ambiance of a tea session is irrelevant to what occurs in your mouth. This focus could have a far-reaching and detrimental impact on your tea sessions, those drinking your tea, the environment and much more.

However, if your purpose is to inspire others, then this purpose will similarly drive everything else in your process of creating a tea session, all the way from your selection of tea, music and chaxi to your decisions on what to say and when to remain silent. But this focus could have a far-reaching and positive influence on your tea sessions, those drinking your tea, the environment and much more. The same holds true if your intention is to communicate peace and wisdom, to express the Divine or Tea Herself, to create of a heart space for sharing on a primarily non-verbal and emotional wavelength, to move toward global consciousness, or many of the other potential modes of working with Tea not just as an artistic medium, but also a spiritual medium.

Working with Tea in a way that returns to the spiritual roots of art is a topic I'll delve into next month... Until then, may you enjoy looking into your own approach to Tea, asking yourself the question "Why do I serve Tea?" and finding answers in each sip of Tea you take...