In this Tradition there are Four Pillars upon which our tea practice is founded, three of which we have dedicated space to in the form of tearooms at our center in Miaoli. Upon entering the Tea Sage Hut, you'll first notice our main tea drinking space, representing the second pillar: Shamans and Daoist Hermits. Here, while serving tea, we pay homage to the tea sages of old, those who retreated to mountains and forests and who drank tea as a healing medicine long before She became a beverage, commodity or art. Then there is the Zen tearoom, representing the third pillar: Dhyana (meditation). This space acknowledges the sacred aspect of farming tea, first cultivated by the Zen monks of China and later preserved and enhanced by the Zen monks of Japan and Korea. Here, in this meditation space, we share tea more ceremonially. Lastly, there is the gongfu tearoom, representing the fourth pillar: gongfu tea. This pillar, and our tearoom, recognizes that tea is also about mastery, sensitivity and highly refined tea brewing skills. In this space we share tea in small company, using more modern methods of skillfully brewing tea as developed in Southern China. In all of these spaces the intention remains the same: to share the Spirit of the Leaf while promoting an awakening of harmony through Tea, without asking anything in return.

The first pillar is Great Nature. Of course, we must reflect on the fact that tea trees have grown in Nature for thousands a million years - long before encountering the Divine Farmer, Shen Nong. One reason we don't have a specific space for the first pillar is because Nature is indeed great, vast and everywhere! Rather than confining and defining a space representative of Nature, we can simply touch our hands together, or walk out the door and into the nearest bamboo grove or tree trove. In one sense, the Spirit of Great Nature is rooted in our tea space. The clothes we wear, the chairs we sit upon, the tea table and all chaxi ("tea stage") elements are processes of Nature in seemingly static form. Separation from Nature is only an illusion. In that sense, there is no way to build upon or be removed from Nature at the tea table. This notion alone is beautiful. And yet, there are ways in which to incorporate components of Nature into our chaxi; or rather, components that remind us that everything is Nature. 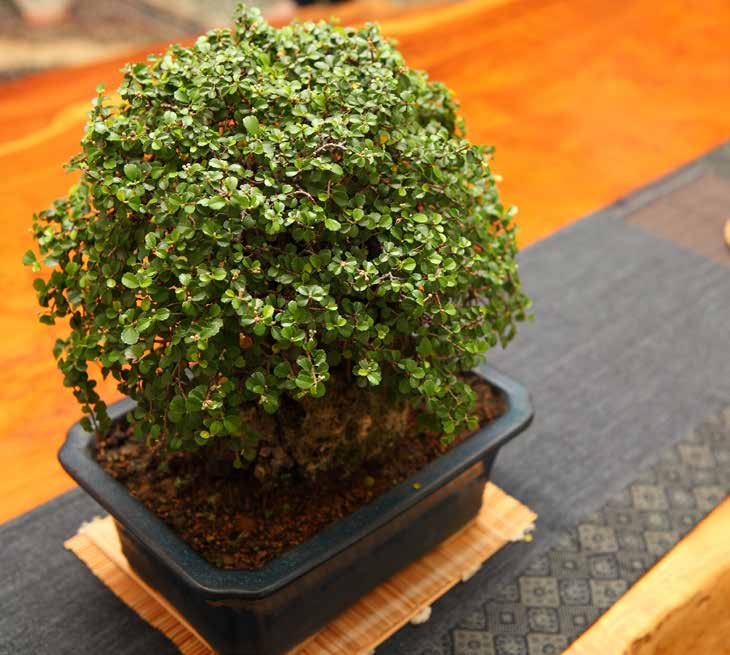 While there are many such examples, there is one in particular that we often landscape into our chaxi: the bonsai, or small potted plant to use a more general term. Simply incorporating a smaller version of something found in Nature is both appealing to the senses and adds a tangible living energy to the overall atmosphere of your tea space. It can blend in with the theme of your chaxi, highlight a particular color scheme, or cast its miniature shadow over an even smaller resting statue of a Buddha, bodhisattva, tea sage or the like. The more apparent living quality found in small potted plants also reminds us that all "objects" are also alive and in some state of growth or decline. So too, the teaware, cloth runner, wooden table, charcoal or flame, and especially the water are all alive, receptive to our consciousness and will. Orienting yourself in this way at the tea table can change your whole perspective on things, and bonsai highlight that shift beautifully.

We are lucky enough living in Taiwan to have access to miniature bonsai, a mini version of a small potted plant! We have one ten-year-old tree that fits roughly in the palm of your hand. Others grow on crag-like rocks, nestled in their tiny planting pots. Root systems undulate this way and that, crowns convolute in human-aided spirals towards the light. So grand, they stand in such small forms. Almost as if growing right out from the wood of our tea table, these tiny trees spring forth. Though their trunks, root systems and crowns are scaled down proportionately, there is something grand about their presence: the way they occupy space, the crooked curvature of their limbs, etc. They represent something much greater than the volume of space they fill. They inspire and act as a living, breathing symbol of our constant connection with Nature.

Like any element of your chaxi, the presence and energy of your small potted plant ebbs and flows. Celebrate it, consume and integrate its message, be grateful, and then change the landscape once again along with the rest of your chaxi. Meanwhile, you always have the added bonus of tending to the small potted plant until its next "season" arises. This is actually easier said than done; it can be quite challenging (in my amateur experience) to properly care for small potted plants, unless you naturally have a green-thumb or a disposition towards communicating with plants (or possibly they just need more water, as I learned the hard way...). Ideally, you might have a large variety of potted plants, bought or grown over the years, rotating them in and out with each new chaxi.

Of course, they are not always necessary and you might not have such easy access to buying or growing bonsai. Taiwan happens to be a place where growing bonsai is passed down from generation to generation, so there is an abundance of small potted plants available. In lieu of these miniature landscapes, you can start to get creative, incorporating your own floral arrangements, small bodies of water, dried flowers or leaves, and other such examples of natural elements at the tea table. Keep things simple and seasonal. You'd be surprised what you might find right out your front door which when gathered and displayed makes for a balanced and beautiful chaxi. Inviting small potted plants or other elements of Nature into your tea space is also a literal expression of the old Chinese saying, "Tea brings Nature to society." Less is more; even a single flower can shift or balance the energy of your entire layout. It being autumn now, perhaps a dried amber leaf or two might delight you, your guests and Tea.

In any case, Nature is inherent in all that we do, in all the chaxi we create. Tea lovers have traditionally always been in favor of natural elements at the tea table, and in particular, small potted plants. There has been a great appreciation for them in our tea space as well. Because the illusion of disconnection with Nature is simply a matter of perspective, the more reminders we have, such as the bonsai, which shift our perspective towards a dialogue with Nature, the better.