Last month we discussed that it is very important to have experiential understanding of how and why you brew tea in a certain way, at least where gongfu tea is concerned. "Gongfu" means mastery. It means doing things with great skill - in harmony with the Way they want to be done. The true artist must be one with the medium in order to achieve mastery. A great ballerina once said that in the best performances there was no music and no her - only dance. Similarly, the tea brewer should be just another aspect of the process, as natural as the growth of the tea itself. The tea grows in harmony with the farmer (ideally), who then processes it in a way that enhances its nature. All of this is one movement, and our brewing shouldn't intrude on this natural process - from seed to cup - but rather be a natural extension of it. If we are to achieve such mastery, our skills will have to be a part of us. We can't have a formula or a to-do list in brewing. It must be in our hands.

If our brewing is to be a part of us, in our hands, so that we could do it in our sleep, then we will have to experiment. We will have to know the history of various brewing methods, or aspects thereof, as well as teaware. When and why was this instrument introduced and what purpose does it actually serve? We have to ask this question and more, and then we have to experiment often so that the differences are experiential, so that we know firsthand what methodology is more in harmony with the tea(s) we are brewing. We shouldn't take things on blind faith, or our tea brewing will be based on intellectual understanding alone. Always do the experiments and know with the body. "Tasting is believing," Master Lin always says.

We promised that we would give an example of this last month. The perfect example is the pitcher, called either a "cha hai" or "gong bei (fairness cup)" in Chinese. Knowing the history of this instrument and what it does, and does not do, helps us to make a wise decision if/when to use one. Actually, the pitcher isn't an aspect of traditional gongfu tea. It isn't even Chinese. The pitcher was invented in Britain and was originally the creamer for milk. In the 1980s, a Taiwanese potter thought the pitcher would be more convenient and adapted it to Chinese gongfu tea. 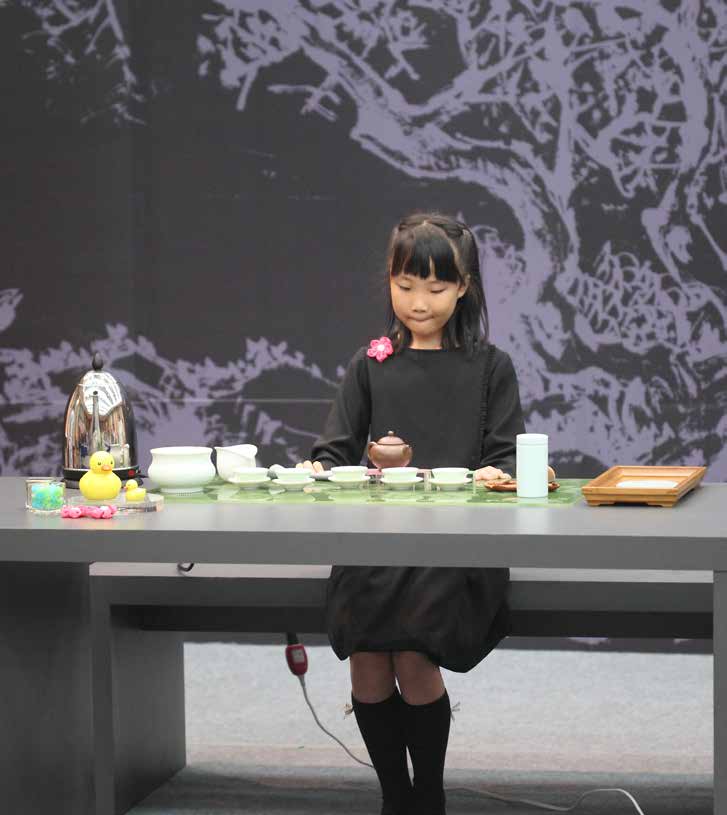 As we mentioned last month, most of the adaptations in modern tea service have been made out of what someone has perceived to be quicker and more convenient, but such changes aren't always in harmony with the spirit of tea, and don't always lead to mastery. Sometimes when you rely too much on the implements to do the work for you, you can't reach mastery - or at least do so much more slowly. The reason the pitcher is often called a "fairness cup (gong bei)" is December 2013 that the liquor that comes out at the beginning of the pot is not the same consistency as that which comes out at the end. The idea is that the tea is then an equal consistency for all the guests when you first put it into a pitcher. However, if you experiment you will see that this only works if you pour right away. If you let the tea sit in the pitcher for any length of time, the tea once again separates, with the heavier liquor sinking to the bottom. Furthermore, the same principal holds true in traditional gongfu tea, which divvies out the tea from cup to cup without a pitcher - the ideal in this method is also to make each cup equal in amount and consistency. The difference is that moving around from cup to cup in the traditional way requires skill, it requires gongfu! To pour the contents of the teapot into a pitcher requires very little skill, but moving from cup to cup and leaving each one equal requires a lot of practice - mastery, one might say.

In the most basic gongfu experiment, which we have repeated here twice, you take three equal cups and fill the first with tea; then you dump half of that in the second cup, and half of that into the third. Then you taste the three cups together, noticing the changes from cup to cup. You will see that each cup is different. There is a progressive loss as the tea touches more surfaces. Now, you can do a version of this with a pitcher:

To do this experiment, you will need two identical cups, a teapot and a pitcher. Place a cup and the pitcher side by side and pour back and forth from the teapot into one of the cups and the pitcher. Then pour the liquor in the pitcher into the second cup. You now have two cups of tea, one in which the liquor was poured directly and a second which went from the pitcher to the cup. Taste them side-by-side. How are they different? Is one better? If so, how is it better?

That deals with the external aspects of the pitcher, but what about internally? On the spiritual level, the coming and going of the cups to the center of the tea space is the breath of the tea ceremony. It represents the truth of our existence: we are one, but we are also apart. Our energies are in the cups we use, and having them mingle together in the center of the table brings us together.

The unity in this practice is apparent. Over thousands of tea sessions we have observed with great consistency (not 100%, but almost) that when a pitcher is used, and the tea thereby divvied out to the guests separately, conversations tend to break up - people start having many conversations, in other words. However, when the cups return to the center every steeping, in the traditional way, we find the whole table united in one, single conversation. There are exceptions to this, of course, but this is a trend. And having one time/one space together is valuable indeed, and makes our tea gatherings so much more rewarding.

The reason for the difference is obvious: everyone's attention is repeatedly drawn to the center of the table. They follow the tea as it breathes in and out, rather than having it brought to them, separate and distinct throughout the ceremony.

This is not to say that we don't ever use a pitcher, we do. A pitcher can be nice in certain situations, like when you have a large group sitting around a bigger, square table and bringing the cups in and out would be extremely inconvenient, or when serving gongfu tea to larger groups. But understanding the history of the pitcher as well as its function, apparent and true, helps one to understand when to use it and when not to. But don't take our word for it. Do the experiments!