One of the most influential skills that goes into gongfu tea, and into making a cup of fine tea is actually not even an aspect of tea brewing. Between sessions our tea sits in storage, and how, where and in what kind of container we keep our tea can influence the liquor as much as any of the teaware, water or brewing skills we employ. Some tea is meant for long-term storage, and will require its own set of guidelines as it progresses through many years or even decades of change. We might write more about aging Puerh, Oolong or other teas in another issue. For now, we would just like to discuss the storage of teas that you are currently sharing with people, discussing how to store the tea between sessions. 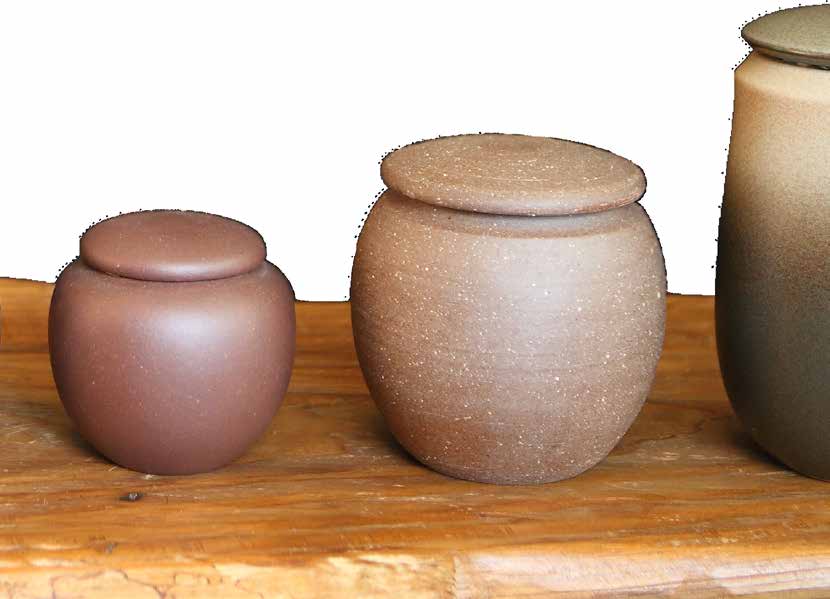 A few basics of tea storage that apply to all tea are regarding temperature, light and smells. Tea should be kept in a cool (not cold) place where it is dark. If it is bright, not only will the light influence the tea, but there is also likely to be temperature fluctuations as well. Tea is very, very sensitive to smells. Some tea gardens in Yunnan were interspersed with camphor trees to help repel insects, and as a result the tea develops a distinct camphor aroma and flavor. Actually, you could put a single rose blossom in a huge jar of tea and if you opened it after some years, you would find that all the tea tasted and smelled of roses. For that reason, the kitchen is usually an awful place to store tea - it's full of smells, cooking, oil in the air and spices, all of which may change your tea.

Basically, you could think of tea's trip into the jar as analogous to going on a meditation retreat, and imagine all the things you would want to provide yourself for a successful sit: You would want to be calm, undisturbed, dark and peaceful. Tea is also very sensitive to energy. In the 1990's/early 2000's, we conducted many experiments aging the same Puerh tea in different environments to see if we could then detect the energetic influence. We distinctly remember one such experiment in which several tongs of tea were kept in different people's homes, a shop and a temple in which three monks were living hermetically, meditating and praying throughout the day. The tea stored with the monks was distinct enough that all twenty or thirty people could pick it out from the others blind, in a taste test where each tea was given a letter so the participants wouldn't know which tea was which. So aside from keeping tea away from light, temperature fluctuations and any kind of smells, you'll also want to keep it somewhere with good vibes!

While the foil-lined bag your tea probably came in is decent for short-term storage of tea that you plan to drink up, it isn't ideal for a long period. Getting a jar is the best. For now, you will want to choose a jar with a tight lid. (Some teas require oxygen, like Puerh and black tea, but we'll talk about all that another day.) Different clays can influence your tea, so you'll also want to get a glazed jar so the tea is not in direct contact with the clay itself - unless you are sure the clay will have a benign or even beneficial effect on your tea.

This month's experiment is about testing the different kinds of storage. Try taking twenty or thirty grams of the same tea and storing it in a few different kinds of jars (or more tea if available). You might want to try leaving some in the foil-lined bag just for comparison. For us, we would try a porcelain jar, an antique porcelain jar, an unglazed clay jar, an antique pewter jar and an Yixing clay jar which is also unglazed. You can add any kind of jar or container to this that you wish. You can test the tea at any time really, but you will have to be more sensitive to notice the effects after only a short time. If you are really interested, you might test the teas every week or so. Otherwise, wait at least a few months, leaving the tea undisturbed for that time.

When you open the tea, try smelling it. Breathe in deeply, then place your nose over the jar and inhale as slowly and deeply as you can - slow is key! (Be sure to exhale away from the jar.) People often want to shake tea when they can't smell it, but this disturbs the tea, breaks the leaves and is energetically detrimental as well. Rather than shaking the tea when the smells are subtle to disturb the aroma and bring it to you, why not calm down, take a few breaths, clear your mind, and go down to the tea. What are the differences between the teas stored in the different jars? Which aroma goes deeper? Lasts longer? Try taking some of the tea leaves out and putting them in some small porcelain cups, smelling them there in order to be objective. You might also want to try removing the leaves entirely and smelling the different jars empty, as this will also provide you with some interesting experiences.

Be sure to let us know what you've found! We are also interested in learning from your experience storing tea in different containers.