Shen created an experiment to test out for oneself the old wisdom that chipping away at cakes is neither best for storage, nor for drinking. Should one really break up cakes completely before drinking as teachers say? Gongfu is always experiential!

Many of you who have visited us here at Tea Sage Hut have participated in some of our weekly gongfu tea experiments. Following a tea session two months ago, we talked about different ways to appreciate, drink, and store puerh tea. What we discussed was what you sacrifice and what you gain by drinking tea in a compressed form versus drinking the same tea in a broken-up form. Furthermore, we also learned why buying tea in volumes of one tong and one cake is popular, helping mitigate the sacrifices of either option.

Breaking up a tea cake

What you sacrifice by breaking a cake up, however, is the ability to age your tea in the long term. So why do it? I know through experience that puerh tea ages better in a compressed form. But, what you gain is an improvement in the quality of your tea due to the exposure to air, letting the tea breathe. There is less of a difference in the layers of compression because you've broken it up. Breaking up the tea quickly improves the quality to a certain point that would have been achieved over a greater amount of time in compressed form. It's kind of like a highlight of what is to come. In as little as three weeks you can notice the difference in quality of the brewed tea when it's been broken up. That being said, while the quality of the tea will improve in a short time, that doesn't hold true in the long term. Tea stored in a compressed form will improve far more over ten years than that same tea if you broke it up and stored it for ten years also. (You can read more about storing puerh tea in the 2014 Special September Extended Edition of this magazine.)

The lesson here is that, if you have an aged puerh tea cake that you want to drink now because you really like it, you could then break it up and store it in a jar. This will air out the tea and revive its spirit. It will be much brighter and more alive after it has sat in a jar for a few weeks.

Tea stored in a compressed form creates the perfect environment for bacteria and other microorganisms that naturally exist on the leaves to thrive and slowly ferment the tea over time. (Besides what we know and can talk about, there are many unknown factors in puerh fermentation, as well.) Obviously, if you have a cake that you want to store long term, it's best to keep it in a compressed form. What you run into here, however, is that if you want to taste this tea from time to time to see how it's aging, you inevitably have to break into it. And when you do so, you most likely break off leaves from various layers/parts of the cake, which can be detected in the cup when brewing. That is partially the reason why the first few infusions can fluctuate so much with certain puerh tea. Not only that, but it takes longer for the heat of the water to fully penetrate the compressed leaves to release their essence. But, what you gain is the age-ability of the tea in the longterm, minus the fact that you have compromised the structure of the cake by breaking into it in the first place!

The lesson here is that if you have an aged puerh tea cake that you want to store in the long term, store it in its whole compressed form. And tasting from time to time won't be as good as breaking it up. In other words, drinking your tea piece by piece from a cake is not ideal for storage or for drinking. Breaking a cake up fully is better for drinking and storing it whole is better for storing.

Tong and a cake

What it really boils down to is asking yourself whether you want to store your puerh tea cake in the long term or drink it. What many tea lovers do to mitigate the sacrifices of either choice is buy a tong (seven cakes wrapped in bamboo husk) and an extra cake. The eighth cake is for sampling to assess how well your tea is aging, so you don't have to break into the tong until you are ready to enjoy the tea, which will age better fully intact. This gives you the flexibility to both store some tea for the long run and break up a tester cake as you decide the age/degree of fermentation you want. Then, after ten years, for example, you might sample your tester cake and decide you really like the degree of fermentation it's at. Then you can break up one of the tong cakes completely and put it in a jar for enjoyment. The broken-up tea will be better for consumption and the remaining six cakes will age further. Tea ages better the more there is around it. A tong will age better than one cake; two tongs will age better than one tong, etc.

Possibly like you now, after hearing all of this and understanding it at the level of the intellect, I wanted to learn for myself, through experience, what the differences in the cup really were between the same tea in a compressed and broken-up form. This month, I invite you to try the experiment I did:

I took an aged sheng puerh tea cake that was around fifteen years old and broke off roughly forty grams into small pieces that fit into a clay jar with a loose-fitting lid. The remaining portion of the cake remained intact in its cardboard storage box. I stored the broken-up tea for one month, opening the lid of the jar to allow more airflow two times throughout the month, for a few hours each time. After one month, I drank both teas side by side, using two of the Light Meets Life gongfu set Lohan teapots. Any two identical gongfu teapots will suffice. You could also do it with one teapot, drinking the compressed tea first and the broken-up tea second. If you have two teapots, you will need two cups per person to drink them side-by-side. Try to achieve an equal infusion time in each pot. Take notes after each infusion, noticing only the differences in each cup, not which one you think is better or worse. I compared four infusions considering flavor and aroma, but mainly mouthfeel. Try to do as many infusions as possible as you may be surprised how the differences themselves differ over subsequent infusions.

This has been one of my favorite experiments yet because it required more time, energy, and care on my part to carry it out. As always, write to us at globalteahut@gmail.com, or add to our Discussion board under the 'Connect' dropdown menu on the website. I'd love to hear your results and I'll gladly share mine with you! 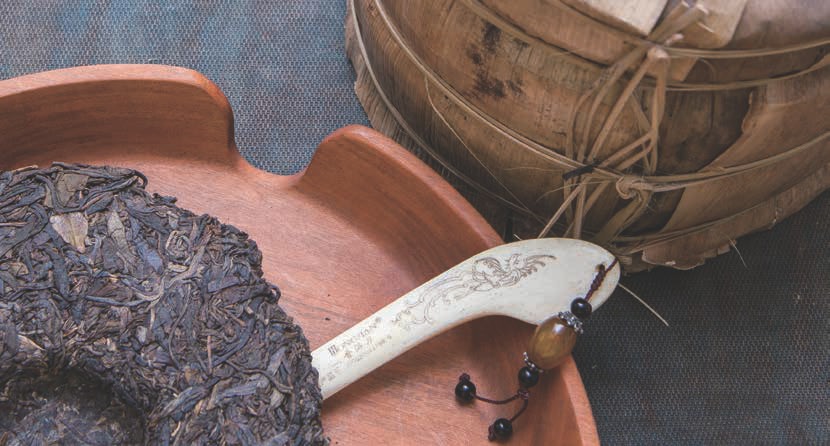