The Fellowship of Tea

The Fellowship of Tea 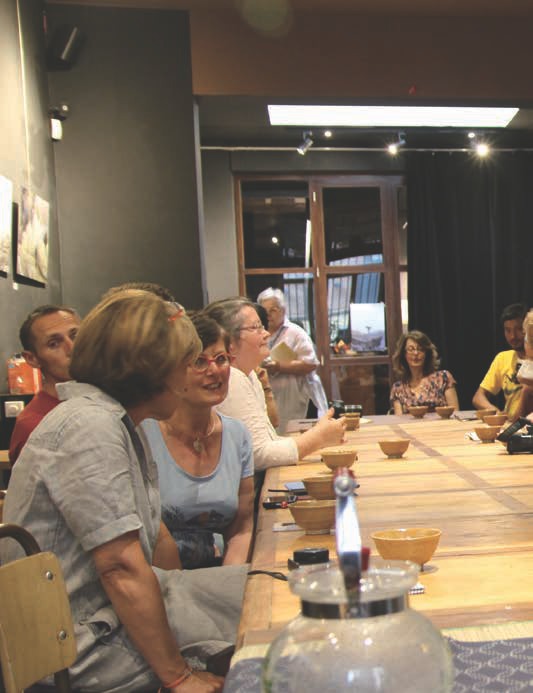 Wu De's recent whirlwind tour of Belgium and Holland found the same ragtag group of Chajin from many different countries traveling around to all the events together. From restaurants to castles, the Zendo to a meditation hall, they shared many adventures, laughs, smiles, hugs and, of course, so much amazing tea. Jasper's stylistic account of the trip is fun to read and full of tea wisdom.

Over the past three years, I've been sharing tea in many different circles, from the smaller and more comfortable circles of family and friends, to bigger and more comfort-zone-stretching circles of less familiar tea lovers from across the country. After this time, the moment finally arrived for Wu De to come over and water the seeds that have been sown in the Netherlands and Belgium by the handful of people who have dedicated themselves to keeping Tea spirit alive here.

I felt grateful for the opportunity to prepare for Wu De's arrival, and our little road trip through Belgium and the Netherlands. I even felt grateful for the challenges. I have never been a very organized person. And I would definitely not take on the major role in any play. I'm the actor who would feel way more comfortable with a role that requires as few lines as possible (and I did, in fact, play such a role in my primary school graduation musical). But preparing for this trip required a different approach. I needed to find the courage to get up on that stage and say more than a single line - only to afterwards realize: "What's all the fuss about?"

Through service, I've experienced that mastery is in one way just another word for really good studentship. Having the capacity to be a student of everything in every moment opens oneself to the unknown, and then you're not afraid to make a choice. Through resting in the present moment, being free wherever we are, we can let ourselves go and act out of a state of being. We can quiet that voice in our mind that says it's all not possible or that we are not worthy or good enough. When we are present we have the capacity to be in service of Greatness, and we can flow with whatever the situation asks from us.

This might be easier to put into practice in comfortable and familiar spaces, like when sharing tea with a group of friends, but we can try to stretch our boundaries bit by bit while staying at the edge of our courage. Why do we resist the situations we find ourselves in anyway? The Universe obviously has us wherever we are! And whether there's a reason or not for being there - cosmically fated or coincidence - that is where we are, in that particular situation, and no other!

I feel humbled and incredibly grateful for these gracious opportunities for growth offered to me. There is merit in getting people together to sit down for tea, for helping to facilitate the creation of heart space and community. And being able to sit at my teacher's side as a cha tong (tea servant), guiding the rhythm of the kettles and observing what mastery of Tea really means, makes my heart spill over with gratitude even more. I wish for all of you many, many challenges knocking at your door. And may you be able to invite them in as dear friends and valued guests, handling them with reverence, care and respect! Because that will mean true growth. 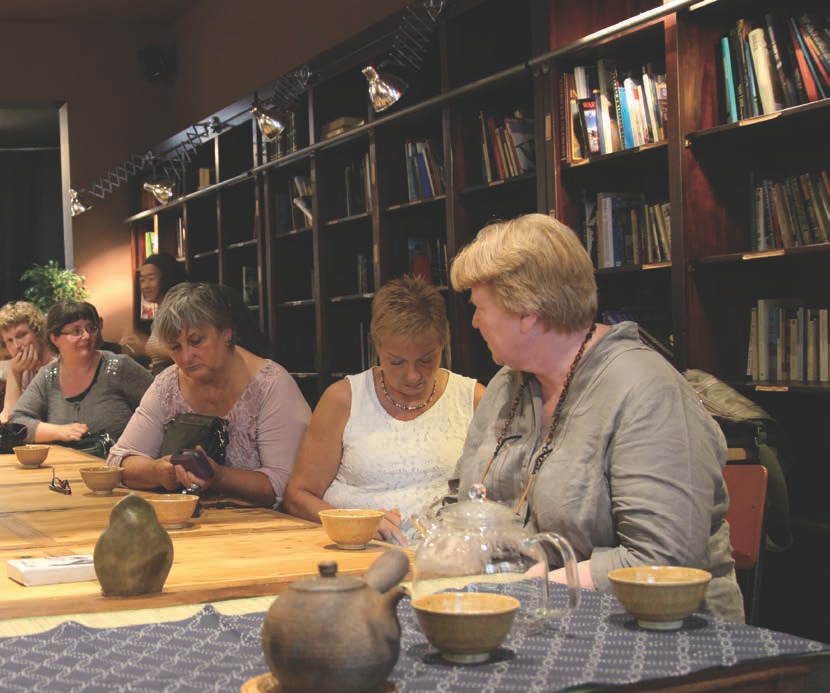 Amazingly, there was a core group of five or six of us that traveled to all the events in Belgium and Holland, staying together at my house and elsewhere. It was so nice to have a close-knit friendship throughout this journey together. In honor of Wu De's favorite story, I've decided to tell the tale of the voyage in the third person of old:

The Fellowship of Tea (In Belgium)

A fellowship of nine companions and Global Tea Hut members from nine different countries gathered in Brussels, Belgium. One of which was the famous tree-bearded, well-fed Tea brother from Miaoli, Taiwan. There, in a dimly lit room, in the back of a little travelers café in Brussels, on a long, worn and torn wooden table, he shared tea with over two dozen tea lovers, old and new. And De Cha Tong's skills in navigating the flow of water were put to the test for the first time.

Many hearts and bellies were filled with tea and words of wisdom. After this successful first stop along the road, the fellowship headed off in the direction of Maastricht, southernmost city in the Netherlands. But not before stopping at the Minnebron, which is said to be one of Europe's best springs to gather water. And it turned out to be a good spring indeed! When the water jars were filled, the prayers were said, and the fellowship had filled up on Belgian fries, they continued their journey once again.

By the time it was dark, they arrived at the castle of Veasharthelt. After some moments of stretching their legs and settling down, the fellowship gathered once again to receive tea from the wise and large-bellied Wu De. With the sound of rain tinkling on the windows, they sipped their tea in silence. It was unclear if the twinkle in their eyes came from the tea or from the soft candlelight filling the room. Perhaps it came from both. Even though no words were needed, Wu De shared his wisdom anyway, and it sounded like the songs of ancient myths, sung until late into the night. Eventually, they dozed into a rather short but peaceful tea-induced sleep.

The following morning, as the rain seemed to be taking a break, they decided to gather underneath a wise and old willow tree, standing strong just in front of a gorgeous lotus pond in the castle gardens. They set up for tea, and after some bowls of silence, Wu De continued his teachings. The fellowship listened attentively to Wu De's words, well protected from the wind and now and then sprinkling rain by the Old Man Willow's majesty. After many, many bowls were drunk, the fellowship said goodbye to some of their friends, and headed off in the direction of the old port of Amsterdam.

Tea and Zen Towers (The Netherlands)

The next day they woke up from a good night of sleep and gathered early morning at the Zen center for a full day's program. Whoever would have felt the need for more sleep that morning was in the good hands of a strong and strict, Yang-energized guide for the morning meditation and rituals. With a firm voice and an even firmer South American accent, the strong, old mistress led them in hard Zen practice. Shaken up by the morning meditation/rituals, they unpacked their gear once again and set up for tea. Along with some new friends, the fellowship sipped from the Zenfilled bowls that Wu De kept pouring so graciously. And although Wu De explained that most of the Zen he could express was in the bowls we'd just drunk, he also shared some Zen teachings.

The whole day seemed to flow along in harmony with Nature. As the Zendo's morning rituals had been full of Yang energy, suitable to the beginning of a long day, the evening rituals were as Yin as twilight. After a long day of intense Zen sips and teachings, the fellowship peacefully welcomed an evening meditation guided by the soft and kind voice of a master with an even kinder look in her eyes. After the sit and evening rituals, the gentleness of the evening - the moonlight falling through the skylights and the rain like Zen bells on the roof - together formed the magical backdrop of an even more magical tea session (perhaps the best of the whole trip, though the fellowship would later differ as to whether this or what later become known as the Hoary Willow Tree Session was best). Within the silence of that evening, a powerful lion's roar resounded throughout their bowls as Wu De seemed to sprinkle some extra magic onto the tea. And if that was not enough to wake one up from a long, deep and sleepy trance, the thunder outside, as well as the thunder of Wu De's words would have been enough for sure!

After a well-deserved rest during the morning and afternoon the following day, it was time to head off to Amsterdam for the last time this trip. It seemed that the message about Wu De and his magic tea had spread, because they soon found themselves in a room filled with over two dozen people! It wasn't long before Tea was victorious again and Amsterdam was left inspired to build community in tea spirit, practice tea at home and use this plant medicine along the way... The last book of this trilogy will be written by the Dutch, as we make our own tea memories and community until the Return of our Brother...

Photography in this article was taken by Tatyana Leonova & Alex Munteanu