You may think that aging tea applies more to puerh or black teas, but tea lovers have been aging oolong for centuries. And unlike fermented teas, oolong doesn't need humidity or heat to transform beautifully. You can age it anywhere in the world. Let's explore some of what goes into aging oolong tea, which teas are better for aging and then we'd like to offer you an exciting chance to age some amazing Dong Ding tea yourself!

This issue is all about traditional oolong, especially Taiwanese Dong Ding tea. There is a deep and lasting magic in a fine oolong when it is processed and roasted well. In addition to providing a richer flavor and stronger Qi, a darker roast gives traditional oolongs such as this month's tea another advantage over the more modern, greener oolongs of Taiwan and China - the ability to age well!

The tradition of aging oolong is as old as oolong herself. As with other types of tea, oolong was quickly recognized to improve with age (especially in the long run). Cliff Tea is traditionally aged for a while before it is drunk, and other areas of China have also intentionally and unintentionally aged oolong over the years. Today, aged oolongs are increasingly revered in Taiwan, where you can find oolongs over 100 years old on occasion and more than a few decades old with relative frequency. Here, some oolong teas are marketed as "aged" after as few as six years, but most tea connoisseurs consider an oolong to be truly aged once it's about thirty, and we've savored a few Taiwanese oolong teas that have been around for one-hundred-something years. We certainly don't expect you to age the can of this month's tea for 100 years, but we'd like to share more about aged oolong with you so that you can know more about what this month's tea (and other traditional oolongs like it) are capable of doing when allowed to sit in meditation for a few decades or longer.

Unless they're stored in poor conditions, most oolongs will become incredible if you simply wait long enough to drink them. And as you will soon see, an understanding of aged Dong Ding will be enriched by experience for some of you, because we have a very special offer this month!

Aged oolongs cover a broad spectrum, from teas that were forsaken for years to teas that won awards and sold for enormous sums before they were aged with the utmost care for thirty years or more (in their sealed, original canisters no less). There are certain factors which influence the quality of the tea at the end of decades of waiting, and one of these factors is undeniably the quality of the tea at the start of the aging process.

Taiwanese aged oolongs are generally made from a traditional style of rolled semi-balled oolong, such as this month's tea. All other factors being equal, this style of tea (and other darker roast oolongs in general) has an advantage over the greener oolongs when it comes to aging.

One of the key differences is moisture content. Traditional roast oolongs only have about two percent moisture content in the leaves (compared to five percent or more in greener, less roasted leaves), so they change and ferment more gradually and predictably. They are less likely to crumble into dust before their time or require excessive re-roasting to keep them from going all musty and moldy.

In order to have low enough moisture content for stable aging, oolong tea needs a longer 'final roast' during its processing. This is a natural part of traditional oolong processing in Taiwan and it is still practiced in some parts of China, too. This is why oolong traditionally didn't require vacuum-sealing, or all that extra machinery and wasted packaging. A stable roast meant the tea could be wrapped in simple paper and preserved that way indefinitely. Although a solid final roast and good storage are enough to keep the tea aging well for many years, many tea masters also like to re-roast the tea to keep the moisture content low during aging. Some do this several times a year, or every five years or at other intervals, and it's common to light up the charcoal fire pit or switch on the electric roaster upon discovery of an accidentally aged tea. However, we are amongst another school of oolong aging when it comes to roasting. More specifically, we don't re-roast our oolongs at all. We find that it makes aged oolongs taste more like roast than aged tea, and that the tea doesn't respond well to the inconsistencies of roasts (which are often done by different people using different roasting techniques over the years).

The instability of oolong teas that are not roasted enough is why many people say that they are not ageable. Since they are instable, their flavor, aroma and Qi will fluctuate drastically over the first ten or even twenty years of aging, often passing through awkward phases. Eventually, Time stabilizes all things, including awkward tea (and teenagers) but for some time the tea will not be as nice. This is actually true of all green teas, certain puerhs and other teas that you would not ordinarily think of as good candidates for aging.

Because oolong doesn't require moisture or oxygen to store, like puerh does, you can age oolong anywhere. Puerh really is best stored in humid environments, especially if you plan to age it for longer periods of time, but oolong will happily transform wherever you live. Simply fill a jar to the brim, which reduces oxygen in the container, and seal it with wax. You'll want to put a string in the wax so it will be easy to open. If you want to check on it more regularly you can forgo the wax, but remember that every time you open the lid you are exposing it to unwanted air and moisture - disturbing the tea's meditation.

That said, we're not opposed to a roast just before it's time to drink an aged oolong. Re-roasting the tea before brewing may dissipate some of the 'off' flavors that accumulated during aging, refresh the overall character of the tea and warm the tea up energetically, if it is done with skill. Roasting aged oolong shortly before drinking is relatively common amongst tea lovers in Taiwan, and it's easy to find small, earthenware oolong roasting sets for home use in Yingge (Taiwan's pottery town). Nonetheless, this takes some practice and skill, and could harm your tea so you may want to try it out on simpler teas first.

A fine aged oolong often has a clear surface and a color like amber, notes of prune and Chinese medicinal herbs in the flavor and aroma, and a balancing, powerful Qi. It feels silky in the mouth and smooth in the throat. It has huigan (a minty-cooling sensation in the mouth and throat after swallowing) and a sweetness that lingers almost as if it is being exuded from the throat. Although thick-walled purple clay Yixing teapots are generally preferred for brewing aged oolongs, a thin-walled, purple clay Yixing pot is said to be ideal for brewing an aged oolong from Dong Ding (the home of this month's tea), as it will elicit more aroma and Qi from the leaves. But you'll know when you're brewing it well because the leaves will begin to murmur to you of their past, present and future, speaking kindly of their many years spent circling the sun, all the while whispering hints of the illusion of Time... 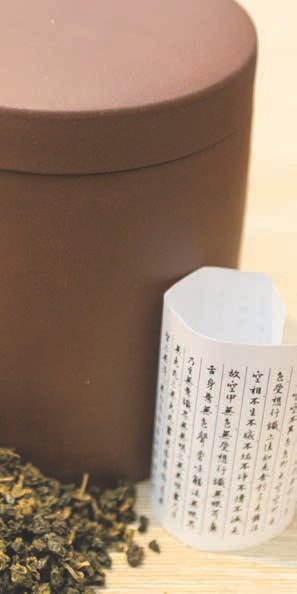 We have some great news for those of you interested in aging some oolong: We have the last of this year's Old Man Dong Ding available in a small quantity of very special jars for aging. We have fifty Yixing jars made from forty-year-old clay, each with 600 grams of Old Man Dong Ding. Amongst Taiwanese oolong teas, none ages better or more famously than Dong Ding; and most tea houses will therefore have one on their menu.

Every one of these limited jars will have a Heart Sutra inside. After cleaning the jars, we will fill them with tea and put in the sutra, sealing the lid with wax. Master Tsai himself has hand-written calligraphy on traditional abundance paper to be put on the outside of every jar, saying "Old Man Dong Ding" in poetic Chinese characters. As the jars are ordered, we will first put them in the meditation hall for two sits, morning and evening, and chant the Heart Sutra over them. In this way, you will have a fine tea that begins its journey with blessings. Unlike puerh, oolong ages well anywhere. It doesn't need a hot, humid climate. In fact, the less humidity the better. All of the proceeds from these fifty jars will go to support the building of our new center, Light Meets Life. Check our website for details!