Luxi Village - The Home of Liu An Tea

Luxi Village - The Home of Liu An Tea

Luxi Village was once a fortified town situated on the waterways of Qimen County, Anhui Province. Look around anywhere in Luxi and you can find traces of history that paint a picture of what the landscape must have been like in days gone by. As the passing time brought roads and railways to replace the waterways as main transport routes, Luxi lost its importance as a trading hub, and went through a period of relative obscurity. Now, after the re-emergence of Liu An tea, we paid a visit to the traditional tea region of Luxi. This gave us a wonderful opportunity to once again catch a glimpse of the local history and tea culture, and bear witness to its importance.

The road to Luxi Village from Qimen County is around thirty kilometers long, and snakes alongside the Changjiang River. As one follows the riverbank, the landscape is punctuated by groves of old camphor and maple trees, lending a sense of depth to the scenery. Every now and then, the reflection of a green hillside on the opposite bank traces an elegant arc on the water. As the car rounds each bend, a brand new scene presents itself; each new landscape unfurls like a never-ending series of painted scrolls, or scenes of a film flickering across a projector screen. 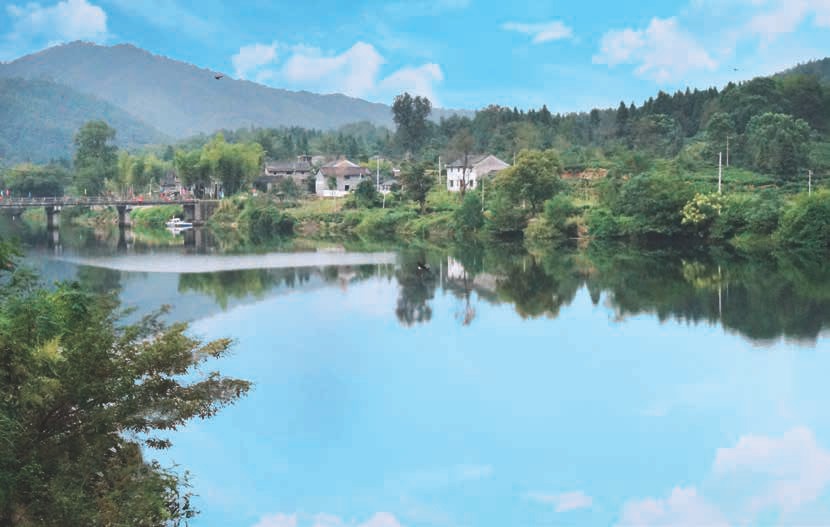 A Village Rich in History

Luxi Village is situated in the southeast of Qimen County. The village is more than one thousand years old, so you can see ancient houses, old groves of trees and ancestral temples everywhere you look. So how is it that such a small village has such a long history? The answer lies in its geography. The village is situated at the meeting point of five large rivers: the Changjiang, Lishui, Qiling, 15

Chawan and Luocun rivers. It's the lowest-lying point in the area, and the rivers all converge to form the widest body of water in Qimen County, giving rise to the famous landscape that's traditionally been described as "eighteen bends leading to the lake." The single river that flows on from this point is called the Changjiang. After the river has rounded those "eighteen bends" and flows out of Qimen, it takes on a different name: though the pronunciation remains the same, the first character of Changjiang changes, so "阊江" becomes "昌江." The river then passes through the city of Jingdezhen in Jiangxi Province (famed for its ceramics) before finally flowing into Poyang Lake in Jiangxi.

In the early days, the Changjiang served as Qimen's main transport canal. Since Luxi was located on the main thoroughfare, it became the gateway for all trade with the South, bustling day and night with boats coming and going up and down the waterways. All local exports of tea, timber and clay (in the early days, Jingdezhen's famous ceramics were made from Qimen clay) had to pass through Luxi, as did imported foodstuffs and other general goods. During the peak of this waterborne trade route, in the Ming and Qing Dynasties, there were around ten thousand boats active on the stretch of river between Luxi and Jingdezhen, and about a hundred docks. Many businesses and merchants set up shop near the docks around Luxi and nearby ferry crossings, such as Fan Village, Dihu and the Dabei port; in Luxi, a great many merchants gathered to sell Liu An tea under various names. This bustling trade gave rise to a saying: "In Luxi, there's nothing that can't be sold, and nothing that can't be bought."

Luxi (芦溪) gets its name from its geographical surroundings: it's located on low-lying land, at the meeting point of the five rivers. The character lu (芦) means "reeds" or "rushes," and xi (溪) means "creek" or "stream." After the Changjiang has passed by those "eighteen bends leading to the river," it's harder to find any sign of reeds. So the name Luxi is very evocative of the local atmosphere, using small details to conjure up a picture of idyllic mountain scenery. 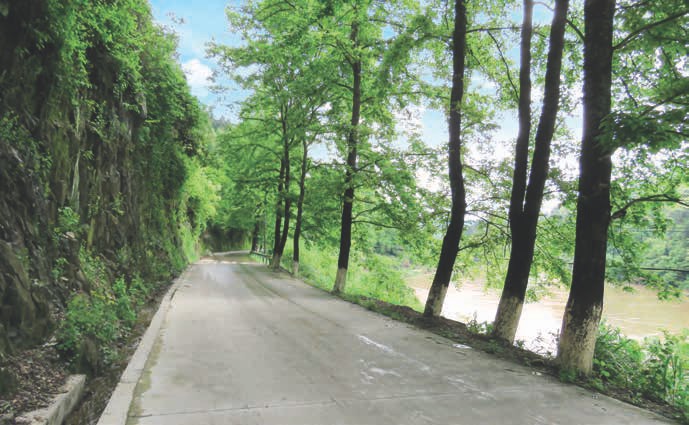 The scenery at the famed "eighteen bends leading to the river," really is beautiful. The rivers are crystal clear, and the area of water that can be navigated by boat totals more than 4000 mu, or around 270 hectares. The local Huangshan City government is currently working hard on plans to open the area to visitors. The road that surrounds the lake is already wellequipped for sightseeing: with fishing platforms, bamboo rafts, painted pleasure boats and small rowboats. During our trip, we drove around the lake, taking in the "eighteen bends" and witnessing them transform the mountain scenery into thirtysix different variations, and simply immersing ourselves in the relaxed pace of this earthly paradise.

Since ancient times, water has been a very important economic resource in Luxi. In the Qimen County records, there's a passage that reads: "In general, the people from the east supply the load, and those from the South are skilled with boats..." Since water transport was such a big part of life in Luxi, all the villagers were very skilled on the water. Even today, the people of Luxi still hold a big celebration with dragon boat racing for the Dragon Boat Festival; with the beating of drums, the shouting of the rowers and the crackling of firecrackers on the riverbank, it's a joyful and noisy tradition that is still very popular in Qimen today. 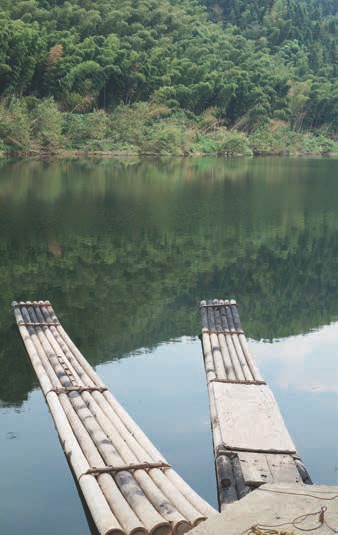 Speaking of traditional festivals, if you ever go to Luxi, you must try to see a Nuo Dance (攤舞) being performed. This type of opera performance has slowly developed over its long history - leading some to term the dance as a "living fossil." Locally, it is also known as the "peace dance" and "local opera." It is often performed during the Dragon Boat Festival, as well as during Layue, the twelfth lunar month, and Lichun, the "Start of Spring." It is traditionally performed to drive away evil, honor one's ancestors and pray for peace and prosperity. Luxi has preserved this custom, as well as the traditional masks used for the performance, to this day.

Luxi, the pearl of the Changjiang, remained Qimen's main hub of waterborne trade and a center of great importance for hundreds of years. On the mountains and riverbanks of Luxi, you can find many cultural relics that bear witness to this rich history. Wander through the village and you'll see many ancient dwellings sitting silently among the lush green fields, with whitewashed walls and black tiled roofs. When you enter one of the old houses, you'll notice that it has two small courtyards with open skylights at the front and back. Any water that collected via the openings would flow down into channels running beneath the stone floor; it would first be directed toward the main room before being let out near the front door. This expressed the inhabitants' hopes that the family's fortunes would flow in, toward the house, rather than out of it. It also provided natural ventilation, keeping the room warm in winter and cool in summer. This clever use of water flow is a great example of Luxi's ancestors applying their wisdom to everyday life.

In ancient times, people relied on waterways for transporting goods, and tea was no exception. Just like the birthplace of Liu Bao tea, ancient Luxi developed due to the influence of water transport, and became home to Liu An tea as a result of trade. Well-known old tea merchants such as Sun Yishun, Wang Yicheng, Xiang Yangchun, Sheng Chunhe and Xin Heshun, all did business in Luxi at one point. Thanks to the fame of this "An tea village," Liu An tea was officially classified as a part of Anhui Province's intangible cultural heritage. In 2011, Luxi Village was designated as a province-level village center, and a village committee was formed to oversee environmental regulation, beautification and new construction. Their efforts included planting pine and cypress trees on the roadsides, and, most striking of all, around 5 mu, or 0.3 hectares, of lotus ponds. With the tall lotus flowers opening their colorful petals and the lotus leaves swaying gently in the wind, the ponds brought a new sense of energy and liveliness to this historical village.

The village bridge that spans the Changjiang has some quite unusual characteristics, too. The left-hand side takes the shape of three semicircles arching across the river, and was built by the Nationalist government during the Republic of China. The right-hand side is flat and extends from the peak of the arch to the bank on the other side, and was completed by the Communist government after the People's Republic of China was established. Thanks to the visual symbolism of the two parties cooperating to complete the project, and some clever wordplay, the bridge has come to represent peace and unity. Chinese lends itself to wordplay - there's a saying that has two possible interpretations of the same characters, guo yuan gong ping (国圆共平). It can be taken to mean either "Nationalists (build) round and Communists (build) flat," or "the people come together in peace." 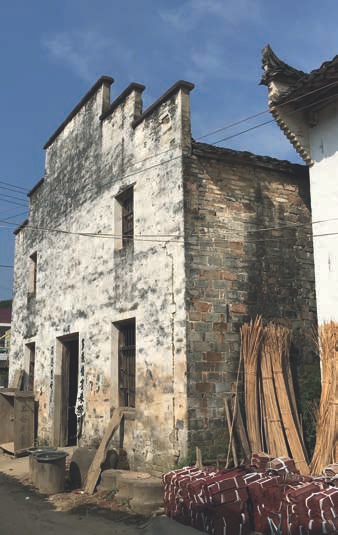 The village has a total population of around two thousand, and the villagers belong to eleven different administrative groups, such as Luxi Village, Luxi Street and Bi Tao ("Jade Peach"). Luxi covers a total area of around 33 square kilometers, over 90% of which is dedicated to forestry, with tea production forming the secondlargest industry. In 2006, thanks to a satellite photo, this heavily-forested mountain village was discovered to be home to around 118 rare Phoebe nanmu trees (traditionally used for furniture and construction) growing across an area of around 0.7 hectares.

Phoebe nanmu trees, known as "diannan (滇楠)" in Chinese, are not native to Qimen - so how did these centuries-old trees originally take root in Luxi's Jade Peach Village? According to villagers, there was once a local man who went to Yunnan Province to serve as an official. When he retired and returned home, he brought some diannan seeds back with him from Yunnan and planted them at the mouth of the water in front of the village, both as flood control and to help balance the feng shui. The wood from these trees is considered very precious, and the trees are now a protected species, so it really was an amazing thing to come across such a large, untouched area of them.

While the peace and quiet of Luxi today belies its history as a bustling trading post, it has inherited a fascinating history and culture that have been carried down the river of time to this day. And, so it seems, the mountains and waters of Luxi may still have a few new surprises to reveal among the relics!