In 2007, Zhou Yu hosted an opening of a jian of 1930s Liu An. Wu De was fortunate to attend the opening and drinking of that tea. Mr. Zhang writes of that gathering, and explores the flavors of aged Liu An tea, as compared to a modern version like our Tea of the Month. Another obvious comparison is, of course, aged puerh. The old Liu An that was shared in that gathering ten years ago was discovered in a Chinese medicine shop, suggesting that Liu An, more than puerh, was regarded as medicine, especially for digestion.

Traditional Anhui Liu An basket tea, or Liu An tea (六安茶), is produced in China's Anhui Province. The tea gets its name from the way it's pressed into shape by packing the tea leaves into small baskets woven from bamboo strips and lined with bamboo leaves. This distinctive method of packaging has also given rise to another, quite descriptive name: "Liu An bamboo rain hat tea." Liu An tea is well-loved among overseas Chinese living in the Southeast Asian region.

Liu An tea production halted for a period, beginning around 1940, but thanks to an ever-growing demand from Chinese living abroad, the China Tea Fund was eventually compelled to act. In 1983, they sent a basket of Sun Yishun Liu An tea (one of the most famous brands of old Liu An) to Anhui Province's tea export authorities, along with a letter conveying their sincere hope that Liu An tea production might be revived. As a result, the Qimen (often called "Keemun" in the West, after the Cantonese) Tea Company began a trial production in Liu An's original birthplace: Luxi Village in Anhui's Qimen County.

The Medicinal Properties of Liu An Tea

While Liu An and puerh are both compressed teas, there are substantial differences between their production regions and the raw leaves used, resulting in two teas that are quite distinct in character and mouthfeel. Because of the natural oxidation, the tea leaves often have a whitish-gray tinge, with the unbrewed leaves of a good-quality Liu An displaying a glossy black luster. The brewed leaves are a deep, rusty red color, and the liquor is a strong, clear red. The tea has an aged yet sweet and mellow scent, with a hint of watermelon skin; it has a pleasant flavor and is quite patient. These two factors are probably the most oft-praised characteristics of Liu An: its smooth, lasting flavor and the unique "watermelon skin" note in its aroma.

Liu An tea was highly favored by people in the previous generation in Hong Kong, thanks to its cooling properties and steady nature. It aids with calm and focus, and is generally considered to be gentler and more soothing on the stomach than puerh tea. Aged Liu An is particulary known for its ability to dispel excess heat and dampness from the body, according to Traditional Chinese Medicine (TCM) theory, in which all types of food and drink have "cooling" or "warming" properties. Hong Kong's well-to-do citizens tended to enjoy smoking cigars, so people liked to drink Liu An as an accompaniment - due to its cooling nature, the tea served to eliminate the excess internal heat produced by smoking cigars.

According to the Ming Dynasty Notes on Tea by Tu Long (屠隆), "Liu An is a fine tea, and is most effective when used medicinally." Aside from use as an everyday drinking tea, Liu An was frequently used in preparing Chinese medicine by doctors in Southern China and parts of Southeast Asia that were populated by Chinese immigrants. Liu An would be added to the medicine as a "guiding herb," to activate or strengthen the effects of the other ingredients. Liu An tea could also be administered to counteract side-effects of overly strong medicines, and avoid adverse effects on the patient's stomach. These days, of course, it's important to take the advice of a trained doctor as to whether these remedies are still considered effective.

Once you've opened the little bamboo basket and gently taken out the Liu An tea leaves, place them in a clean vessel, free of any scent. Then, take out the bamboo leaves used to line the basket and put one in along with the tea leaves. The brewing method is similar to that of Yunnan puerh, but adding one of the small bamboo leaves into the brewing vessel really allows the unique flavor of Liu An to shine. This is the most popular brewing method in Hong Kong, and produces a distinctive style of tea. The bamboo leaves that are stored along with the tea in Liu An baskets are also said to have healing properties in their own right, such as clearing and soothing the throat, and reducing internal heat. Some tea shops in Hong Kong used to sell the bamboo leaves separately for people to brew as a remedy.

As well as brewing Liu An on its own, you can add some dried orange peel or osmanthus flowers, which both create unique flavor blends. Dried tangerine or orange peel is a commonly used ingredient in Chinese medicine. It improves with aging, which gives rise to its Chinese name, chenpi (陳皮), or "aged peel." It's known for its ability to eliminate excess phlegm and dampness, regulate Qi and maintain stomach health.

Osmanthus flower (or guihua, 桂花), has warming properties in TCM and is used to dispel cold and promote meridian flow, as well as to transform phlegm and relieve coughing. According to tea sellers, osmanthus is also beneficial for the complexion, so it tends to be popular with female customers. Osmanthus flowers have a full and long-lasting perfume; in the past, osmanthus flowers in Taiwan were most often grown next to tea plantations to enhance the fragrance of the tea. When brewed together with Liu An tea, the two elements make for a gentle and harmonious combination. A faint hint of osmanthus perfume brings out a different feeling in the tea. Because of Liu An's refreshing flavor, a purple-sand teapot is also an excellent choice for a brewing vessel. The coarser texture of the purple-sand clay (zisha, 紫砂) allows more air to perforate the pot than other materials, bringing out the clear, refreshing flavor of the tea even more vividly.

Although Liu An and puerh are both classified as teas that can be aged, they are quite different in character. Liu An is notable for its fresh, clean flavor with a hint of sweetness, and for the purity of its aroma - it echoes the simple, carefree elegance of bamboo. Puerh, on the other hand, is mellow and full-bodied with a lingering flavor. Both varieties have their own admirable qualities and are certainly worth trying.

On October 30th, 2007, a tea session was hosted by well-known Taiwanese tea master Zhou Yu (周渝) along with Luo Yingyin (羅英銀), editor-in-chief of the tea magazine The Art of Tea: Puerh Teapot. For the occasion, they opened a basket of San Piao Sun Yishun aged Liu An (三票孫義順). The first few brews displayed some muddled flavors and a slightly astringent feel on the tongue - it wasn't until the eighth or ninth brew that the astringency faded and the various extraneous flavors dissipated. The tea was also quite different after sitting for a while than when it had first been opened - after the leaves had been "woken up," the liquor was much smoother and more lively. After opening the Sun Yishun, Zhou Yu and Luo Yingyin held a second tasting on November 1, once the tea leaves had had a couple of days to re-absorb some moisture. During those days, the weather had also changed from dry to rainy; Zhou Yu remarked that this sort of cool, damp weather was perfect for drinking aged puerh or aged Liu An tea.

After sitting for two days, the aged Liu An was perfectly clear from the very first brew, with none of the muddled flavors of earlier. It's possible those extra flavors were due to the dry weather the first time we tasted the tea. For the second tea tasting, we also switched to using spring water from Wulai District in New Taipei City; according to Zhou Yu, the level of astringency in tea also has to do with water quality. Good quality spring water would reduce the chance of astringency and enhance the intrinsic qualities of the tea. The passing of time, the change in the weather and the choice of water all contributed to creating the ideal meeting of place, time and human spirit, to bring out the deepest nature of the tea.

Aged Liu An embodies a spirit of depth, history and elegance that distinguishes it from the bolder teas made from "big tree" or "dashu (大樹)" tea plant varietals; it brings to mind the graceful shapes formed by a dancer in a Kunqu opera. The liquor is fine, sweet and smooth with a delicate mouthfeel and mild, fragrant steam. Most Chajin describe the aroma as having a hint of Chinese medicine or ginseng. It has a cooling, calming effect that gradually spreads throughout the whole body, bringing a feeling of transcendence to the spirit and mind.

Drinking Liu An is beneficial to both one's physical and spiritual health, and helps cultivate a calm and steady spirit. Experienced Chajin know that fine, small, white teacups are the best match for Liu An, to complement the delicate nature of the tea. Carefully sipping small mouthfuls of the gentle tea liquor, it feels as if one is truly drinking in the serenity of the passing time. This is the true beauty and spirit of aged Liu An. 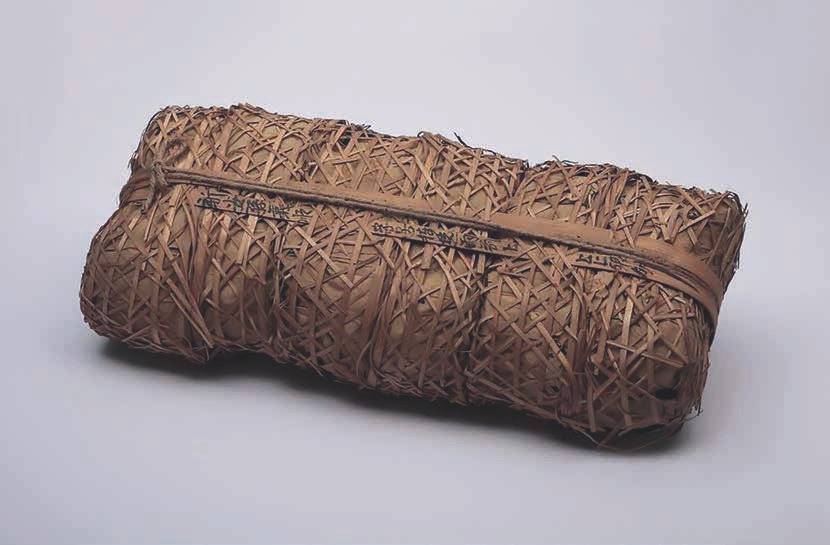 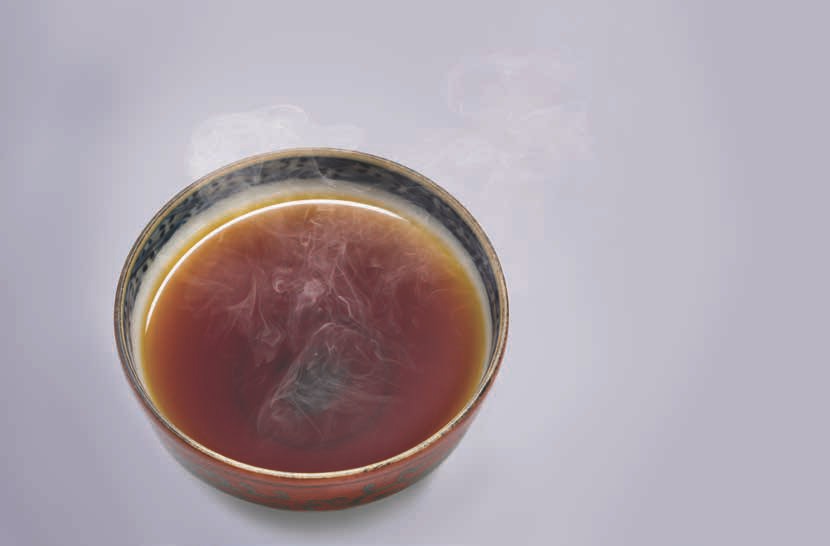 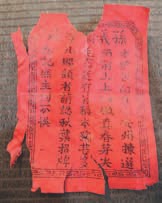 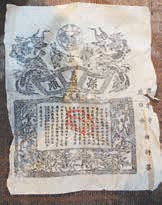 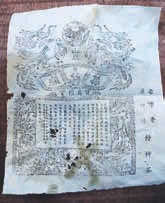