Spring in Qimen County is filled with fragrance. It's the liveliest season of the year, and everywhere you go, the delicate perfume of tea is faintly present on the breeze. The green tea plantations stretch across the slopes under clear blue skies; the fingertips of the tea farmers move in a constant rhythm. At the tea markets, the ever-present aroma of tea wafts above the bustle of buying and selling; it accompanies the tea makers in their farmhouses at night, or in their small workshops and tea factories. The towns of Qimen in April are tranquil yet lively, just like villages from a story.

Qimen's natural beauty unfolds abundantly in its forests and mountains, and the tea plantations nestled among them also benefit from the nourishment of the local environment. Over the years, as this historic region has undergone economic and cultural changes, one variety of leaf has evolved into three distinct styles of tea: green tea, red tea and black tea. (Here, it may be useful to recall the distinction between Chinese red and black teas: red tea is what is commonly referred to in English-speaking countries as "black" tea, while black tea refers to a dark, "post-fermented" style of tea, such as puerh and An tea).

Qimen has been known for its tea production since the Tang Dynasty. Tea production techniques have also evolved over several dynasties, from earlier methods of rubbing and kneading the leaves to the more recent pan-firing method used to produce green tea. Up until the time of the Qing emperor Guangxu, Qimen had always produced green tea. It wasn't until 1875, when Yu Ganchen (余干臣), a native of Yi County in Anhui, returned home from his official posting in Fujian Province to become a merchant, that this began to change. Yu admired the Fujianese red tea, often known as "Min Hong (閩紅)" or "Fujian Red," for its rich flavor and popularity on the market, so he began to produce red tea locally. The next year, he set up a tea shop in Shanli Village in the west of Qimen, and thus began the success story of Qimen red tea. At the same time, a Qimen native by the name of Hu Yuanlong (胡元龍) was also starting the "green to red" trend, and set up the successful Rishun Tea Factory. From that time on, red tea production in Qimen continued to grow and flourish, making Qimen one of China's major red tea producing regions. Qimen red tea is known as "Qi Hong" in Chinese (祁紅, literally "Qimen Red"), and is also known in English as "Keemun" tea, after an older anglicization of "Qimen."

This "green to red" phase in Qimen's tea history was largely motivated by changes in the international tea market. At the time, the overseas demand for red tea (or "black" tea, as it was called outside of China) was growing rapidly, which directly spurred the growth of red tea production in China. Fujian Province's three main types of Min Hong gongfu red tea were not being produced in anywhere near a large enough quantity to satisfy demand. So, red tea production expanded to the north and took root in provinces such as Jiangxi, Hubei, Hunan and Anhui. Qimen in Anhui and Ningzhou in Jiangxi were known for producing the finest teas.

Meanwhile, in the United States in 1875, Chinese green teas were already not selling as well as their Japanese counterparts; this, along with the sudden increase in demand for red tea, presented a challenge for the green tea export market. Qimen, which had always produced green tea, began to feel the influence of the international market, so shifting toward red tea was the most prudent response to the changing circumstances. Thus, Qimen burst forth onto the international red tea market, and since then, the export market has been the main driver of red tea production in the area. 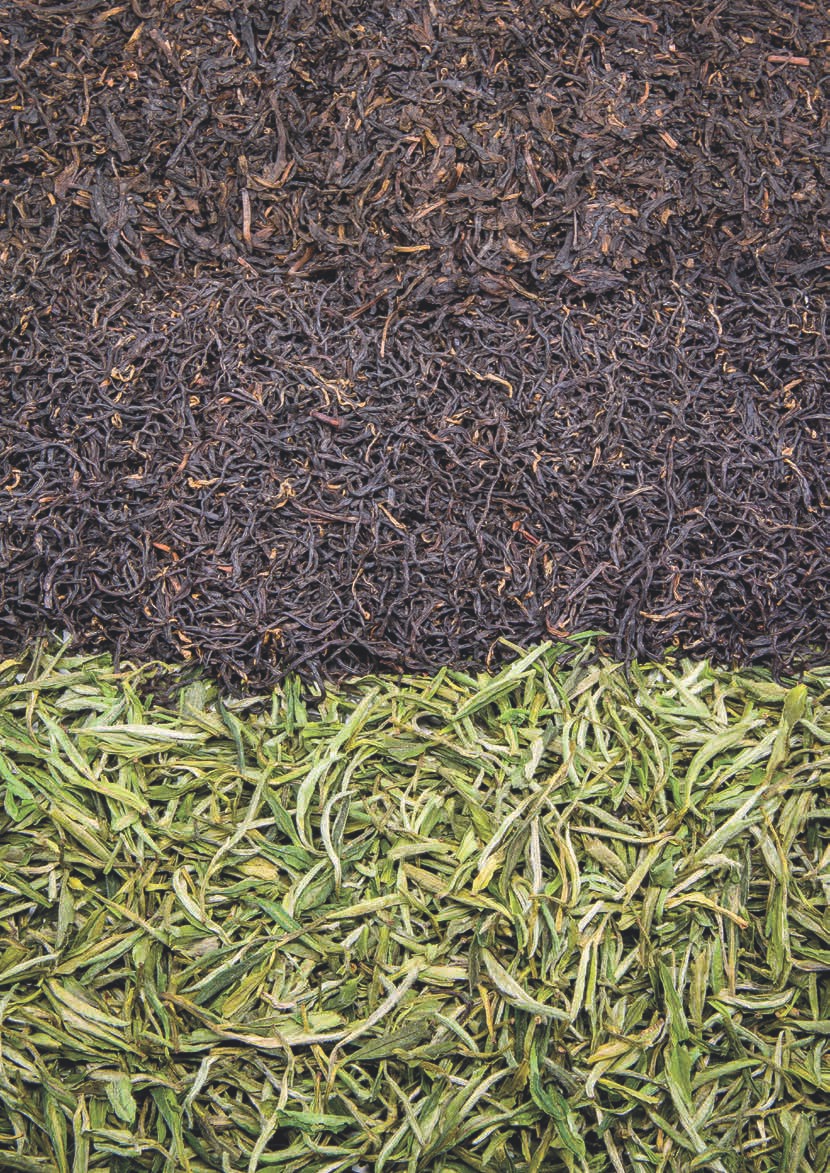 The tea industry continued to develop along these red tea lines, up until the founding of the People's Republic of China in 1911. When the planned economy era began, all purchasing and marketing of tea was controlled by the State. Several decades later, in 1984, the State Council announced policy changes, easing market restrictions; with the exception of tea sold directly across China's borders, all tea for the domestic and export markets could now be freely bought and sold. The changing tides of policy led to a reversal of the trends in Qimen, and a "red to green" phase began to emerge. This was because red tea was mainly produced for the export market; now that the State no longer bought and sold tea on their behalf, many small rural private enterprises in Qimen didn't have the ability to sell tea for overseas export. So, they turned to green tea, which was popular on the domestic market and which they could easily harvest, process and sell by themselves.

At present, Qimen County governs seven "townships" (an intermediate administrative division) and eleven villages. Of those, only two produce mainly green tea: Fufeng Village in the southeast and Anling Township in the north. The green tea produced there is mainly Maofeng tea. If you ever have the chance to visit a rural Qimen family in their home, you'll be welcomed warmly with a cup of green tea - surprisingly, though, it isn't Maofeng, but rather a simple homemade green, fired in their own pans. The raw leaves for green tea are generally picked in March, in early spring, when the leaf shoots have just begun to sprout; the leaves for red tea are harvested later, during the second wave of growth.

The Revival of An Tea

Red tea still accounts for the largest volume of tea output in Qimen, with green tea coming in second. Out of the eighteen towns and villages in Qimen, Luxi Village is the only one that produces An tea (a variety of black tea in the Chinese sense, also known as Liu An). During the reign of the Qing emperor Guangxu, before red tea gained popularity, An tea was produced throughout a large area of Qimen and sold well on the export market. An tea production ceased in the mid-1930s, and the tea remained very obscure until the mid-1980s, when policy reforms opened up the market. Around this time, the China Tea Fund in Hong Kong sent a basket of old Liu An to Qimen, along with a letter expressing how much Chajin of the older generation throughout Guangdong, Hong Kong, Macau, Taiwan and Southeast Asia had missed An tea over the last half-century. Their fondest wish was that this tea might start to be produced once more. After a few attempts at recreating the production techniques, An tea was finally reintroduced to the market in 1992. As the market was still finding its feet, it wasn't until a few years later in 1997, that Liu An Bamboo Rain Hat Tea (named for the bamboo baskets it is packaged in) began to be produced steadily once more.

At present, Liu An tea is mainly produced in Luxi Village and Dianbu Tan, and there are about four companies that make it. The three varieties of tea - red, green and An tea - are all harvested in the exact same area. In March, when spring arrives, the first wave of shoots are mainly used to make Maofeng green tea; while the leaves used for An tea are not harvested until after the Guyu ("Grain Rain") solar term, which runs from late April to early May.

Qimen red tea is known throughout the world for its fragrance; while the charm of Liu An tea is fondly remembered by older Chajin in Guangdong, Hong Kong, Macau and Taiwan. Qimen green tea's clear, sweet flavor makes it a favorite on the market. Altogether, the harvesting period for these three tea varieties only lasts for about two months in the spring. So, as soon as the first tea shoots start to appear, people across the whole countryside pour all their energy into the business of tea. For the tea farmers, it's a constant race against time, and a lot of tea trading goes on during this period too. All three of these amazing teas (red, green and black) all fly their colors on the roads and in homes everywhere. 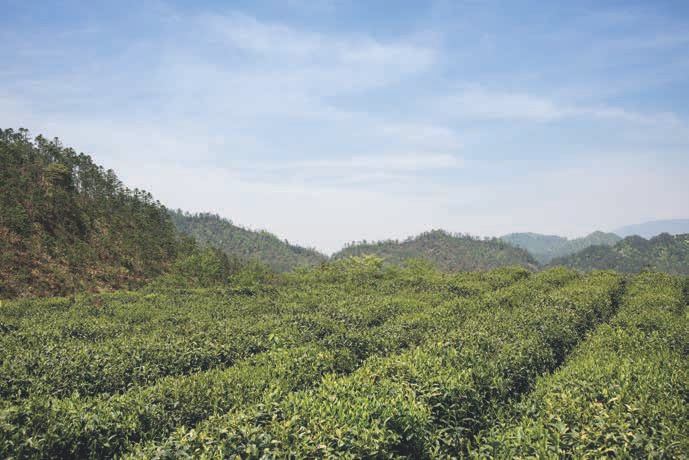 In the vast Jindong tea market, the voices of merchants and customers rise and fall in a constant hum from dawn till dusk; at its busiest, it's reported that more than ten thousand people do business here in a single day. Early each morning, the latest batches of newly finished green tea are shipped in from all over the county, and the trading floor soon becomes a bustling hive of activity. The market is housed in two large sheds, with many tables laid out inside - with these simple facilities, the trading can commence. The busiest time in the trading halls is not during the day, but instead, is in the evening, particulary between 10 p.m. and 1 a.m. at night, which is when the most deals are made.

When you enter the market, you'll notice that every single person appears to be a tea connoisseur: they only need to pick up a handful of tea leaves to assess the fragrance and the shape of the leaves. The region where the leaves were grown, the time of year they were picked and the plumpness of the tea shoots all factor into the price of the finished tea. Everyone is busy trading, with their expressions focused on the task - it doesn't pay to display too much emotion, even when such an array of deep green, subtly glossy tea leaves is spread before your eyes!

Apart from the large city tea market, you can also see tea trading going on at all sorts of smaller locations throughout Qimen County. Every afternoon, from around 3 or 4 p.m., many tea farmers finish harvesting for the day and come down from the mountains. They all gather at a makeshift tea market at the village entrance to sell the tea leaves that they've just picked that day. The locals refer to these fresh, newly picked tea leaves as "tea grass (cha cao, 茶草)."

From the hustle and bustle of the markets to the quiet tranquility of the gardens, spring in Qimen is infused with tea. Whether it be the bright character of Qimen red, the elegance of An tea or the delicate sweetness of Maofeng, the subtle fragrance of tea will quietly accompany you wherever you go.