Over the years, we have collaborated with many beautiful people in our tea ceremonies and workshops around the world. We have held beautiful sessions with tea and music, including the acoustic marvelousness of Timo and Herkko in Estonia, as well as the gorgeous mandolin and violin of Cye Wood in Berlin and a great tea and shakuhachi evening in Kiev, Ukraine. Wu De has also shared the stage with many great teachers around the world, helping to raise awareness for Global Tea Hut and Light Meets Life. It is always nice to bring communities together and share teachings in new ways, often to the benefit of all the participants.

Though these events have always gone well, Wu De has always viewed them as singular, special mornings or evenings of tea and "other." He's never spoke of a continued collaboration before. This is not to say that we wouldn't repeat any of the amazing collaborations we have had the fortune to participate in over the years - quite the opposite, we'd serve tea while Cye Wood plays any day of the week! But Wu De has never felt like pursuing an ongoing collaboration with another teacher - until now.

If you read the article on pp. 31 - 36, you will know that Wu De and Dave Melladew teamed up last autumn to offer a Tea, Zen and Qigong retreat here in Taiwan. We headed up into the mountains near the Center - to an area called Nan Juang, which is coincidentally where we hope to build Light Meets Life. For seven days, participants meditated, drank lots of tea, practiced Qigong, had acupuncture treatments, took Chinese herbs and listened to these two experienced teachers lecture on these three topics, weaving their teachings through each other. The week was extremely successful, and everyone left a bit brighter than when they'd come, uplifted in body, mind and spirit.

Wu De and Dave both reported that they inspired each other. In fact, Wu De wouldn't stop talking about it after Dave left, joyfully exclaiming how wonderful the retreat was. He said, "Throughout the week-long sit, there were repeated times where Dave would exclaim that I had already said what he was planning to say in his lecture. The funny thing is that I felt exactly the same! He often beat me to the Zen stick, so to speak, covering issues I was planning to explore later the same evening!" Wu De said that he also felt that Dave had rekindled his martial arts practice and was therefore one of his "sifu (masters)" now. For the first time ever, he was very enthusiastic to collaborate with another teacher, suggesting that their methods and teachings complement each other perfectly and that he hopes that this was the first of many retreats. "Dave brings a downto-earth approach to Chinese medicine and Qigong that works perfectly with our tradition's tea practice. The Qigong movements were the missing piece needed to perfect my ordinary Zen and Tea retreats. I always wondered why the annual retreat in Spain was so much better than other Zen and Tea retreats, and now know that it is, of course, due to the hikes which add movement to stillness, which brings balance and harmony. Dave's Qigong movements actualize this as well, and surround it with theory and approach that further contextualizes the balance."

Participants also felt the cooperative efforts of the two, and the way their teachings wove together seamlessly. It was a great retreat, and we knew that it would be historic and sadly underattended, mostly due to financial and geographical limitations. How many of you would love to have joined us? Well, now you can. We had the foresight to record Wu De and Dave's discourses, remastering them and offering all the Zen and Qigong discourses for each day in one set. The tea lectures are, unfortunately, not included as Wu De did not want to record the tea classes, much of which were hands-on and, he feels, demand that participants be there in person. Still, the Zen and Qigong lectures are rich enough for you to listen, learn and maybe even use in your own personal retreats at home. 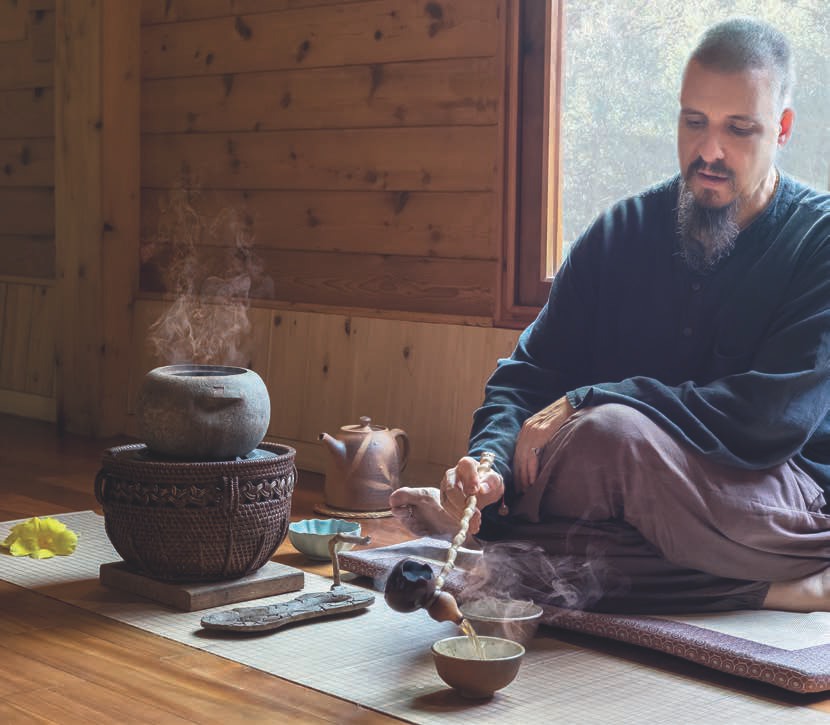 The entire retreat discourses of Wu De and Dave Melladew are available for download at:

(You can also find it by visiting our bandcamp page)

We are asking for a minimum donation of $99, the proceeds of which will support our Center and Global Tea Hut.