One thing I've learned about love is that it transcends time. When you meet someone that you've known from another incarnation, you also know that you loved them then as well. It is obvious to see your love for a friend extending into the future, but what is more amazing is that our love also seems to blanket our past like the snow that came with me to Estonia. I meant that when I try to remember my childhood I do so with a heart that loves Kaiya, and I cannot therefore imagine what it was like before I knew him and we became brothers. Similarly, I can't remember a time from my past without a deep love for my wife, because that love is present and so is my act of remembering. It's as if we have always loved one another, long before we met in this life.

As I travel the world, I often have the very distinct feeling that this person is familiar to me, and that we have worked together before. I often know immediately who will play a deeper role in the spread of this tradition, and what that role will entail. It is hard to imagine that as I was starting to teach students in Taiwan, Steve was on vacation in New York and decided to take a drive out to a small Japanese market to see what they had. On some dusty shelf, he found my book. He says he almost put it back, as he had collected so many unread or half-read tea books. Something inside told him this one was different, though. When he read it, the words resonated with him, because they were an expression of the same tea spirit he had often felt in his own sessions. From a dusty book, almost forgotten, Steve walked into our center around a year later... 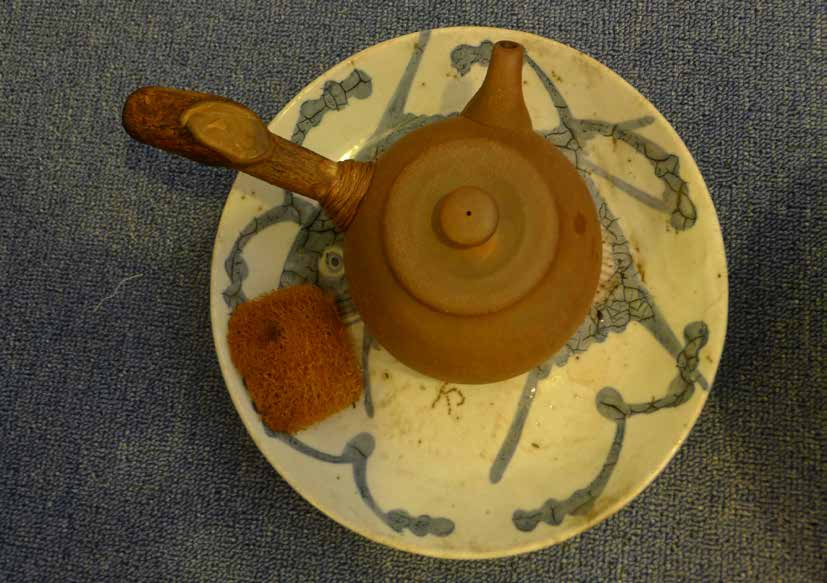 I'm not sure I had ever even heard of Estonia before Steve's visit, but the moment he arrived I knew he was familiarly important - the way so many have been - and that we had worked together before and would do so again in this life. I knew I would eventually go to Estonia, and told him so. I think he was a bit shocked to hear that, having just arrived in Taiwan and only just met me (at least this time!). Well, it's always present and time flows by in torrents. In another Now, I was on a plane bound for Estonia with a full schedule of tea workshops and tastings.

Being an unconscious shaman, I brought a huge snowstorm with me and the mild weather of the past two weeks before I arrived was blown away by what Estonian meteorologists were calling, be loosely translated, "the WuDödiludö Storm." Snow is fun when you haven't seen it in a long time, but the cold isn't. Still, Estonia is a beautiful country and Tallinn an amazing city. There is an old town built in the medieval times, with cobble-stone streets and charming little shops, turrets and walls and excellent views from the higher parts. It was amazing to walk down such ancient and haunted streets.

I had been warned that Estonians were cold, but I found them to be a lot like Japanese and/or Chinese in that they just don't show emotions so easily and are concerned with 'face' - what others are thinking. In that way, I was already prepared and though I had some trouble reading them sometimes, I found them anything but cold.

It was so great to finally be able to situate my dear old friend Steve in his home and work, as we often think about him here at the center. Now it is so easy to imagine him at his desk, talking to Triin or driving and admiring the bleakness of a winter afternoon. He is also surrounded by some of the most beautiful people I have ever met, his two assistants Triin and Siim. Triin is a gorgeous woman who loves tea and has helped Steve since he opened his shop. Siim is a young man with a passion for life and tea, and who was eager to learn and grow. Needless to say, I fell in love with both of them before my trip was finished. 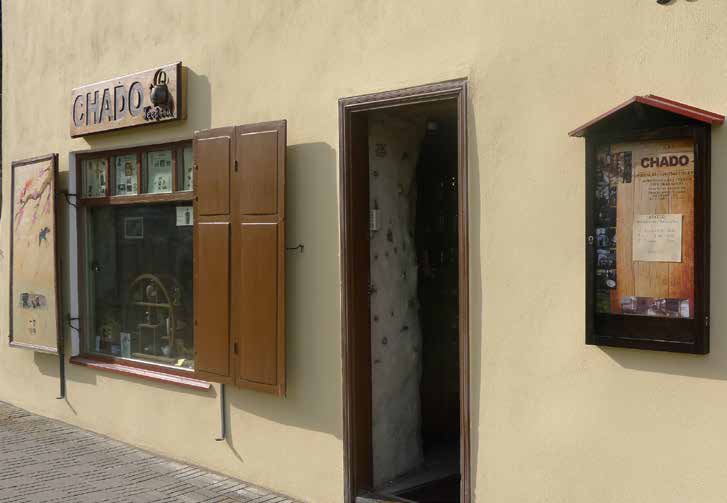 Steve had told me all about his tiny little shop in the old town and I had the impression that it was going to be the kind of kitsch tea shop you find in some places in the West and that I would have to be polite and not talk too much about what I thought. Fortunately, this was another of my life's many blunders. Chado is a gorgeous little shop: quaint, with good warm energy and a very surprising collection of fine teas and chocolate. (It didn't hurt that the stunning shopkeeper Maria was behind the counter when I arrived, either.) It felt great to hug Steve and tell him I love his shop, would frequent it if I lived nearby and that I was so proud of what he has created. If you are in Estonia, be sure to drop in (especially if Maria is working!) It is small, but the old town is so atmospheric, lending its charm to the shop as well. And I think a teahouse of some kind will follow soon enough...

We did two one-day workshops the first weekend and a two-day workshop the second weekend, with three of the biggest public tastings I have ever done during the week - the last of which had thirty people! The first Saturday workshop started our work out gently, as it was small and intimate. I met some great tea lovers, like the unforgettable Edgar who is the tea expert at a small tea shop and Chinese restaurant in Tallinn. He was full of tea spirit, and asked nice questions. It was amazing to see him open up after each bowl as the day wore on. The second one-day workshop, on Sunday, was incredible - maybe my favorite of the trip. I met a beautiful Chinese woman named Rui Rong who hardly spoke any English, yet was intent on coming and sharing tea with us. I translated some for her, but she said she was very contented to sit in quiet. Later, she hugged me with moistened eyes and said the day was pivotal for her life. She owns a Chinese restaurant in Tallinn and possibly faces a lot of stress. Everyone in that workshop was amazing: and Triin, Siim and Steve did a great job with the water for tea and food for lunch. Some of you who have attended such workshops know that they often seem timeless, as if we have been in that room sharing tea for eons. I also won't soon forget the bright smile of Jaanus, another whom I immediately felt familiar with. Many of our new Estonian friends are, in fact, sitting with us in the hut sharing this month's tea! The tastings were at a trippy-hippie yoga studio in the old town. I have never served tea to such large groups at once. We boiled up some Five Element tea and sent them all to the moon! We sat in silence for around forty-five minutes and then I asked them if they had any questions. I think Estonians are shy about asking things in public. Fortunately, I had some Russian friends who came mid-week so there was some discussion. Then we watched the Global Tea Hut video and chatted for a while. The tastings were a bit shocking for a lot of the people, I felt. They had maybe come thinking to have some tea and ask about its flavors and origins and were instead cast into a dark and psychedelic yoga studio with Sixties décor and lifted out of themselves via Five Element tea. In all three tastings there was a different group of old ladies in the back right corner who - all three tastings - looked like they were freaking out a bit. Many people were touched, though, and I even saw some moistened eyes.

Speaking of Russians: one of the greatest joys of the trip was reuniting with Dennis who you remember from my trip to Siberia. He flew over to Estonia from Moscow to join the two-day workshop and help out with the tastings. It was wonderful to see him again and meet his friend Nikita, a bright tea lover with a real palate and a great soul.

We did have a three-day break in our schedule. We headed down to the small town of Viljandi where Steve has a small country home with a ghost in it. It was nice to see some of the Estonian countryside, forests and so-called "bogs", as well as to rest in preparation for the work we did later in the week. 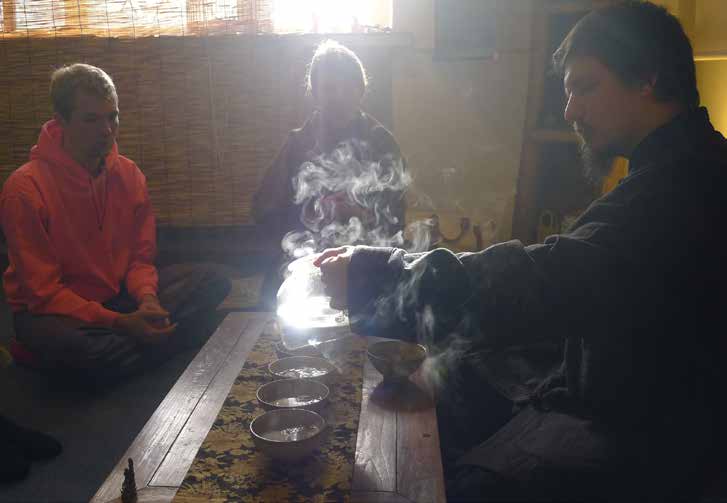 The last workshop was one of the most intense Five Element workshops I have ever given. Dennis said that the one in Russia was so loving, whereas this one was so deep and intense, "but both good!" He exclaimed in a thick accent. There were many beautifully sincere questions, notes and a deeper exploration of the elements of tea alchemy than is usually possible with beginners. They often asked such insightful questions that we were covering things way beyond an introductory course and doing some interesting experiments as well: tasting waters, differences in heat sources, teaware, etc. I think everyone was touched.

As usual, I gave all those who attended the workshops a bowl and some tea and told them their homework was to drink at least three bowls every day first thing in the morning (yes, it was Sun Moon Lake Red Tea). So far, we have found that most all of them have done so faithfully, and some have even continued weeks later. I hope that the love for tea we kindled in Estonia is fanned and fuel is added so that it burns brightly til next time. To that end, I asked Steve and Timo to host some weekly tastings in Tallin. Timo is another Estonian who has made his way to the center. He now hosts small gatherings in his hometown of Tartu. The three of us had a great time eating, laughing, drinking tea and goofing around at night after the workshops and tasting - brothers, indeed!

If you had asked me a few years ago if I would ever be going to Estonia, I may have exclaimed "Where?!" Follow the Cha and the Dao where it leads: through tea make friends, Estonian friends! I couldn't imagine a life without my new Estonian family, and look forward to all the amazing tea we will share in the future. If any of you out there in the Hut find yourself in Estonia, look up Steve and your other brothers and sisters for some magical, medieval tea!

*This is the part where Kaiya makes air-guitars and I throw up the ol' Devil's horns and shout, "Estonia Rocks!" At which point we both start pumping our fists and howling, jumping around like idiots...