The old man sipped his tea. He had never grown weary of that flavor. His father had picked Oolong tea, as had his father's father and grandfather. And his young grandsons would also one day pick tea just like his daughter did now. It all made sense in a comfortable kind of way. He was proud to be a farmer of Oolong tea, and took pride in the fact that it was the best tea in all the Kingdoms. Even the great emperor, Lord of Heaven and Earth, was said to prefer the taste of Oolong above all else. The old man nodded, agreeing with his own thoughts. He drained his cup and watched his two grandsons sprint across the yard towards the house, the dying sun infusing the sky behind them in the same sweet amber liquor he'd just finished.

The village boys were only clean right after a bath, and even then but briefly. The old grandpa didn't mind having them on his lap though. He loved the boys, as his grandpa had once loved him when he came home dirty and ruffled by a day of adventure. He too had once sat on his grandfather's bony lap and listened to stories. He smiled now at his own bony knees. It was a smile of contention. He was a part of something longer and greater than himself. His reminiscence of his family's legacy in tea put him in the mood to share it with the boys. He poured them each a cup of tea and laughed at the awkward way they held the cup, smelling the liquor as he had once taught them. He ruffled little Chang's hair. "Do you know what makes Oolong tea so special?" his bushy white brow flared in askance. 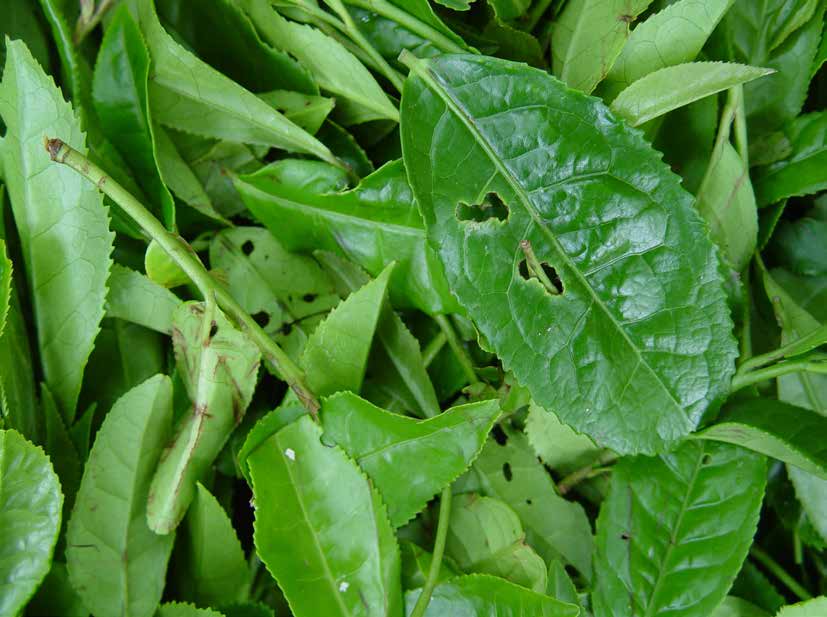 "I do." Said the older Chen, not waiting for recognition. "Its because of the shaking."

"That's good Chen," he sighed patiently. He poured them each another cup. "Let me tell you about the origin of Oolong tea." The boys ignored the tea and stared at him with rapt, glimmering eyes. Grandpa's stories were the highlight of their evenings...

"Long, Long ago people here picked tea just the way they do now. And they fried, shaped and fermented it just the same too. But they didn't know how to shake it the way we do. Oolong tea wasn't the great treasure it is today, and the farmers had a hard time selling it." He looked at the children in mock-seriousness, "And the children had to work all day instead of playing by the river." The older one moaned and the younger Chang gasped in disbelief. "At that time there was one farmer named Wu Long Wang. He actually liked hunting much more than picking tea. He was young and loved to daydream, and rarely brought home his quota of leaves. And that was why he was nicknamed 'Wu Long' or 'Black Dragon', because he always took so long to gather his leaves that he was tanned dark by the sun. His family was always complaining. No one thought any good would ever come of him. He did occasionally redeem himself, though, by bringing home a good catch to share for dinner. Wu Long Wang took his bow with him everywhere. He wasn't any good at picking tea or farming, but he sure was a great shot with that bow. In fact, the village's annual archery contest was the only time everyone liked Wu Long Wang. The rest of the year he was a just a lazy dolt." He paused to remind Chen of the virtues of hard work. 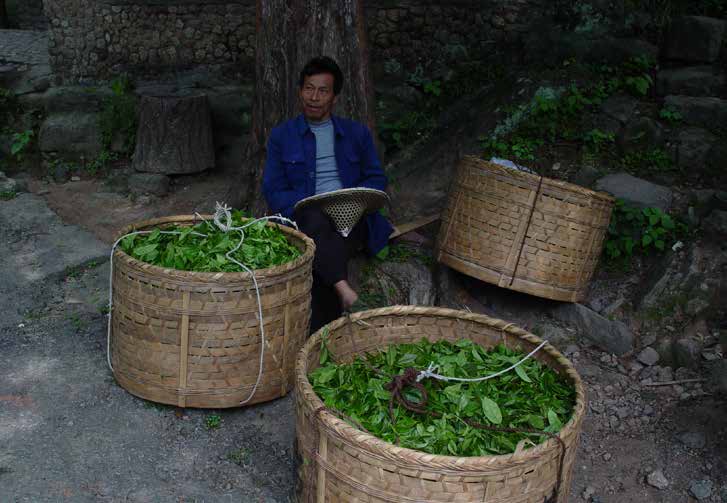 "One day Wu Long Wang's father told him that he had better bring back a whole basket of tea leaves or he'd break his bow over his head. Wu Long Wang worked hard all morning and afternoon and filled his basket with the best leaves he could find. Just as he was about to sit down and be lazy, he saw the biggest, plumpest rabbit he'd ever seen. It noticed him and darted away. Wu Long Wang sprinted after the rabbit, without even thinking of setting down the basket of tea on his back. Half of the leaves flew out behind him in a trail, but he didn't stop. He had to have that rabbit." The old man paused dramatically to let the boys imagine the chase. "Finally after an hour or two, the rabbit grew tired and Wu Long Wang used his bow to shoot it. He was so proud he didn't even stop to rest, but skipped merrily back to the village. He showed his father the rabbit, but his father only had eyes for the half empty basket of tea. He grabbed Wu Long Wang's bow and" the old man mimicked breaking the bow over Chen's head and both the boys laughed. "Wu Long Wang went to bed with no dinner. He was very sad. For two days and nights, his father refused to speak to him. On the third morning, the village elders were all waiting for Wu Long Wang when he woke up. He thought he was in big trouble for sure. To his great surprise they all shook his hand, congratulating him and asking him if he had slept well. He looked at them confused.

'Wu Long Wang' they said, 'the tea you picked two days ago was the best tea we have ever had. All of the elders in the village have tasted it and agree that it is heavenly. You must show us where you picked it.' Wu Long Wang showed them where he'd found the tea, but they had picked that tea before. They asked him to tell them exactly what had happened that day." The old 6 man set Chang on the ground next to his brother and leaned in, "and do you know what they found out?" 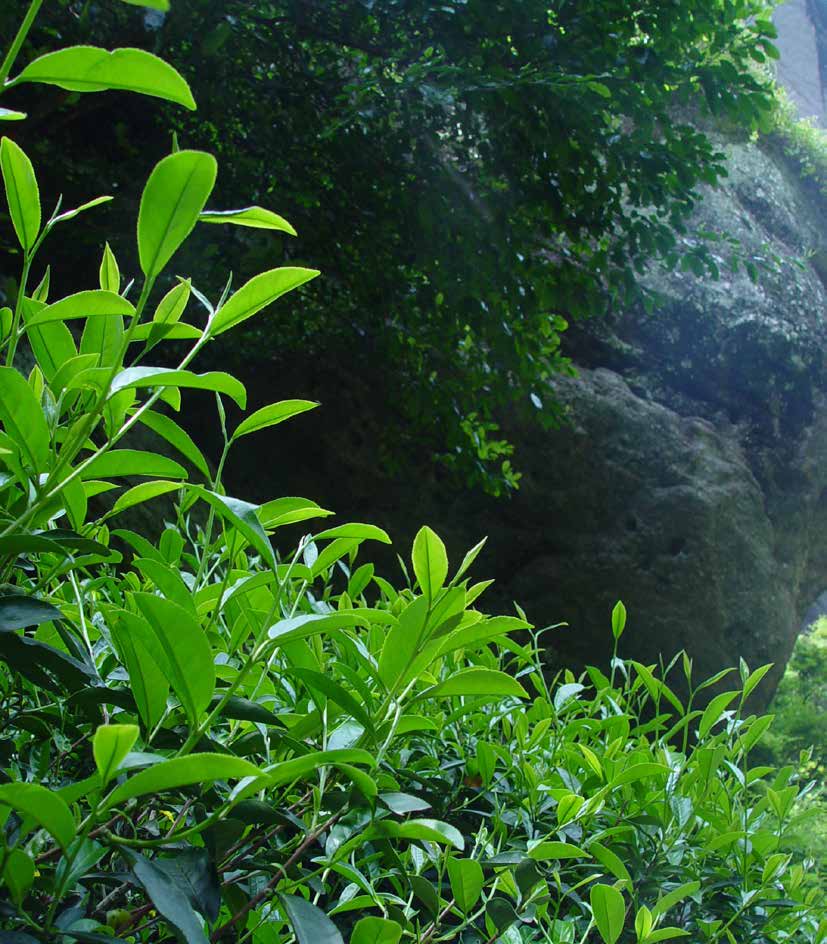 "I do, I do" said Chen excitedly, "All the running had shaken up the tea leaves and that's why they tasted so good."

"Clever boy" he patted Chen's head. "And from then on, we have always shook the tea. The village elders were so happy with Wu Long Wang that they named the new tea 'Oolong' after him. He was allowed to hunt and daydream for the rest of his days, as he pleased." He looked at the boys and asked, "Do you know the moral of the story?"

"Yes grandpa, I remember" replied little Chang, "daydream a lot, but don't forget to jump at the rabbit when it comes." 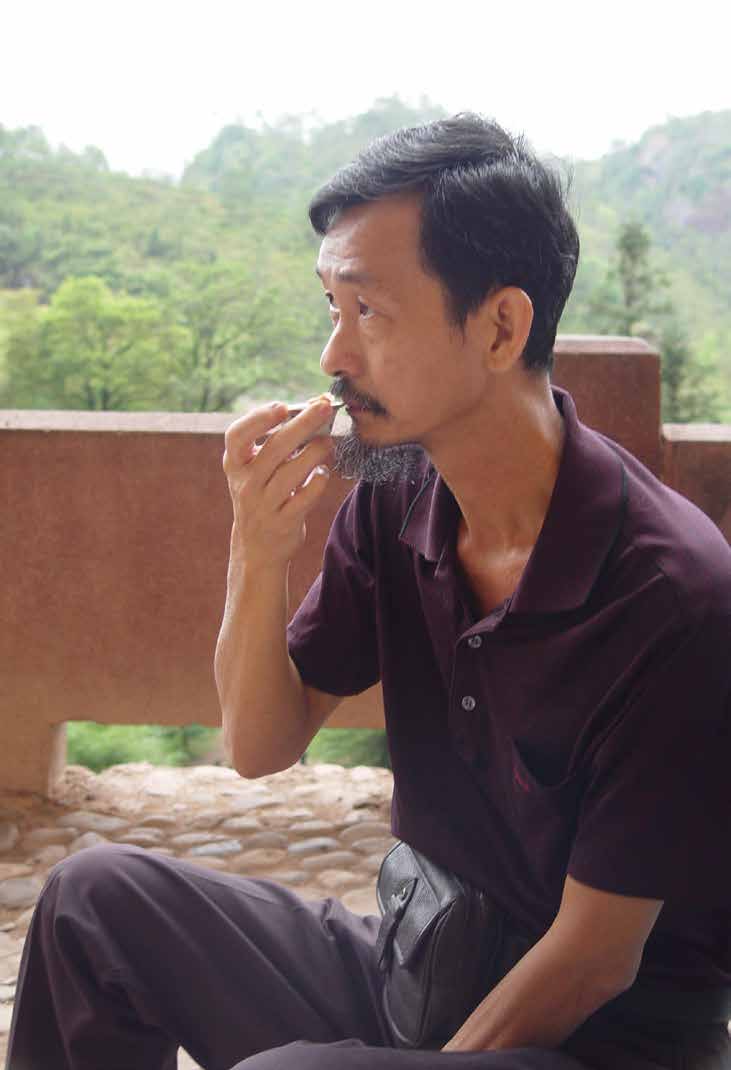