For most of us, the weather has turned cold and we need a warm tea to see us through these frigid months. There is great joy in a warm cup of tea when it is cold outside - perhaps even looking out at the snow from a warm place, watching the smile rise from our kettle as a reminder of how comfortable it is to be quietly indoors. This is the season for aged Puerhs, especially Ripe (Shou) Puerh. So this month we decided to send you a 1990's Ripe Puerh from one of our favorite shops here in Taiwan, which we have quite appropriately named the "Upstairs Shop."

As we have discussed in previous issues of this newsletter, Puerh comes in two varieties, Raw/Sheng and Ripe/Shou. The processing of Puerh tea is rather simple: it is picked, oxidized slightly, fried to kill a green enzyme and arrest oxidation, rolled to break down the cells, and then sun-dried (traditionally, though not always nowadays). The difference between Sheng and Shou then comes post-production. Sheng is left green, fermenting over time, whereas Shou Puerh is artificially fermented by human beings.

It also helps if you understand a bit about the differences between oxidation and fermentation. Basically, fermentation requires the presence of bacteria, like with cheese and wine and oxidation is just breakdown due to exposure to oxygen, like a cut apple turning brown. There is a very informative and well-written article by our own Bob Heiss in issue two of our free online magazine The Leaf, which explores this topic in some depth (www.the-leaf.org).

Shou Puerh is first processed like Sheng into what is called "rough tea (mao cha)". This is the tea that is bought at gardens and taken to factories for production - either left as loose leaf Sheng, compressed as Sheng cakes which ferment naturally over time, or artificially fermented into loose leaf Shou or compressed Shou. The artificial fermentation process itself, called "wo dwei" in Chinese, consists of moistening and piling the tea under thermal blankets. The heat and moisture promote the fermentation, not unlike composting.

Shou processing is not traditional to Yunnan, or to Puerh for that matter. Post-production artificial fermentation is what characterizes Black Tea (not to be confused with Red Tea, which is often mistakenly called "Black Tea" in the West, as we have discussed in previous articles). In the 1960's, factories in Yunnan wanted to speed up the fermentation of Puerh, thinking that they could recreate the flavors of fine, aged Puerh in a much shorter time. A good aged Sheng can take thirty, forty or even seventy years to be fully mature, depending on whom you ask. In the past, when we first became interested in tea, aged Puerh was much more ordinary and it was not uncommon for shops to only drink tea that had been aged seventy years or more. But nowadays scarcity and increased prices have changed things, and many people now consider thirty-year-old tea to be well-aged. Anyway, in the late sixties the big factories wanted to recreate the magic of aged Puerh in a short time. They therefore researched artificial fermentation, studying other Black teas like Liu Bao, and eventually began adapting the process to Puerh. In 1972, they received permission from the government to begin fullscale production of Shou Puerh, which is why books often claim that to be the starting date. Of course, they were not at all successful at recreating the magic of what Nature does to Sheng Puerh over many decades. Instead, they invented a new genre of tea, which must be judged on its own merits; and indeed is. We participate in tea reviews for magazines, and Sheng/Shou reviews are always separate - even the criteria that define quality in these teas are very different.

It actually takes a lot of skill to control the piling process used to ferment Shou Puerh. Unfortunately, many of the factories have lost these skills over the years, though not all. Dangerous bacteria may even be introduced if the piling is done improperly, and ammonia and other harmful chemicals created as well (The amount of some of these chemicals is important to the quality and safety of the tea). For that reason, it is better to buy modern Shou tea from bigger factories that have been doing it longer and have more hygienic facilities. Still, the best option is to buy old Shou Puerh, which is much, much cheaper than aged Sheng. 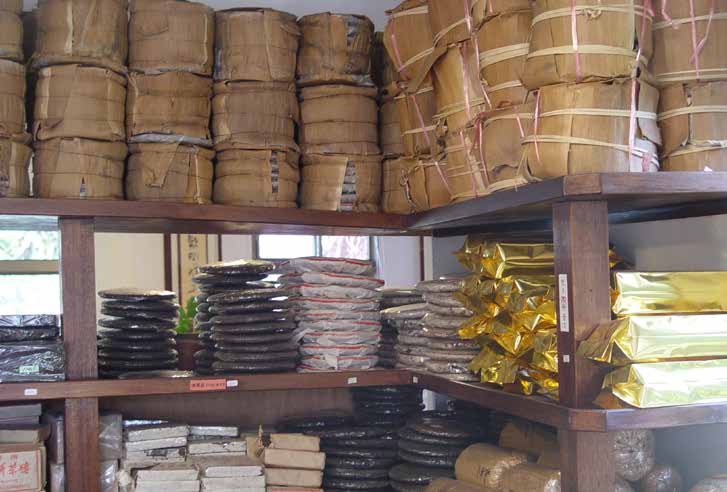 Also, we have found that the Shou tea produced before the year 2000 was all fermented much more lightly than what is being produced nowadays. These days, the tea is piled until it is fully fermented, at most factories anyway. As we've said, it takes skill to successfully ferment the tea to a desired amount. It is much easier to just leave it to fully ferment. This leaves the tea with a pondy flavor and a hint of ammonia. It also cannot age, but rather just mellows out a bit as the years pass - perhaps growing less pondy if you're lucky. The Shou tea that was made between the 70s and 90s, however, was usually only partially fermented - sometimes even as little as 40% or 50%. This meant that the tea also changed over time, aging like Sheng. In fact, there are some aged Shou teas that only seasoned Puerh drinkers would even know are in fact Shou. One of the appeals of aged tea, of course, is that the earth was cleaner before and the production in Yunnan involved no agro-chemicals of any kind.

Our Tea of the Month is made by Menghai tea factory, the biggest and most famous factory between 1972 and 1998, which is what we call the "Chi Tze Era" of Puerh. The recipe is 7572, which is also a famous cake of Shou Puerh, though this is the loose-leaf version, which is a bit cheaper. Puerh is always more expensive in cake form, as the vintage can be assured and also the tea ages better that way. The 7572 of the recipe is one of many batch codes that were once used only within the factory, but have since become famous. The first two digits (75) refer to the year the recipe began (in this case 1975). This does not signify the date the tea was made, just the invention of the blend itself (Our tea comes from the early 1990's). The third digit (7) refers to the "leaf grade", which is a technical term for the size of the leaf from one to nine, nine being the biggest. As you can see, our tea (7) is made up of quite large leaves. This means the leaves were on the tree longer, are more Yin in energy, and by market standards a slightly less expensive quality, since there are less buds. The number seven represents an average of the leaf size. Finally, the last digit (2) refers to which of the handful of factories were operating at that time (2 for Menghai).

This special tea is great in the winter, with a deep earthy flavor and nice Qi that will warm you up. Such older, higher grade leaves usually came from bigger trees at that time, too. Good Shou tea should be creamy, malty and thick with earthy depth. The liquor is thick and warm, spreading from the chest. You can steep or boil it - drink it from a pot or a bowl. It is difficult to prepare it poorly. We'll imagine you drinking it somewhere warm, and with people you love. There is nothing like the rich, dark earthy flavors of an aged Puerh on a cold winter day, except perhaps one prepared and sent with great love from far away and then enjoyed with fellow tea lovers from around the world!