We pride ourselves at sending you guys amazing living teas each month, and put a lot of time into finding unique examples of what a living tea is. As we have spoke of in these newsletters, in this tradition we like to discuss teas in three main categories: Living (real) tea, organic plantation tea, and so-called "dead" or "commercial" tea. Understanding these categories helps us effect change in the tea world, and in how human beings relate to Nature and our place in Her cycles. These categories aren't meant to be derogatory towards certain teas or producers, but rather to highlight the importance that certain ecological and environmental truths have on the health of humans and the Earth itself.

True, living tea is seed-propagated; the trees have room between them and are not pruned, which drastically reduces the roots. Living tea could also be called "garden tea", with less plants and huge biodiversity. Producers of living tea recognize the infinite connections a tree has with its environment, and that removing any cog in the natural ecology disrupts everything, including the tea. This means there are fewer tea trees and that they are indistinguishable from the wildlife around them, interacting with other plants, trees, snakes, insects, etc. Living tea trees are allowed to grow old, and are cared for and approached with respect for whatever amount of tea they offer us.

There is a great problem with real, living tea, however: there simply isn't enough. For that reason, we must compromise in this modern age. We need some plantation tea: cloned and pruned, planted closer together and with less wildlife around. Still, this lesser tea can indeed be produced in a sustainable, healthy way when it is done organically. Chemical pesticides, fertilizers and weed-killers greatly disrupt the health of an ecology and break natural dynamics that we can't possibly understand. Recent studies, for example, suggest that birdsong is relevant to the health of trees and plants and that the reduction of wild birds is also causing problems for certain trees and plants. And why are there fewer birds? Pesticides, of course: no insects means no birds. An organic plantation allows us to produce larger quantities of tea for a greater audience while still having a bit of biodiversity and more importantly without creating huge gaps in the local ecology. The chemicals on tea are also unhealthy for us, causing a variety of diseases in humans as they do in the Earth.

These are the only two kinds of tea we promote in the Global Tea Hut, and we hope that this project itself can help make a difference in promoting more Living Tea and organic plantations. Some of the farmers we have highlighted here, like October's Mr. Xie (also featured in one of our videos), have successfully converted many of their neighbors to organic farming by showing them how to earn a living without compromising their principles.

If tea is to be a medicine, connecting us to Nature, to ourselves and to each other it cannot contribute to the destruction of the Earth. It must be grown in a healthy way, with a true tea spirit behind the conversation between the producer and the trees. Everyone is always converted in one sip. You know it when a tea is alive, and the spirit of this magical plant is shinning through.

This month's tea is a very special Yunnan Red tea that is often called "Golden Monkey." If you remember, we discussed in a previous issue that what Westerners often call "Black Tea" is actually Red Tea in China. Red Tea is a heavily oxidized genre of tea, that is usually processed by piling the leaves immediately after picking and leaving them piled for twelve to twenty-four hours. The tea is then rolled for a long time, much longer than partially-oxidized tea, to further break down the cells and encourage oxidation. It is then dried and packaged. This special Red Tea, however, is very unique for many reasons. 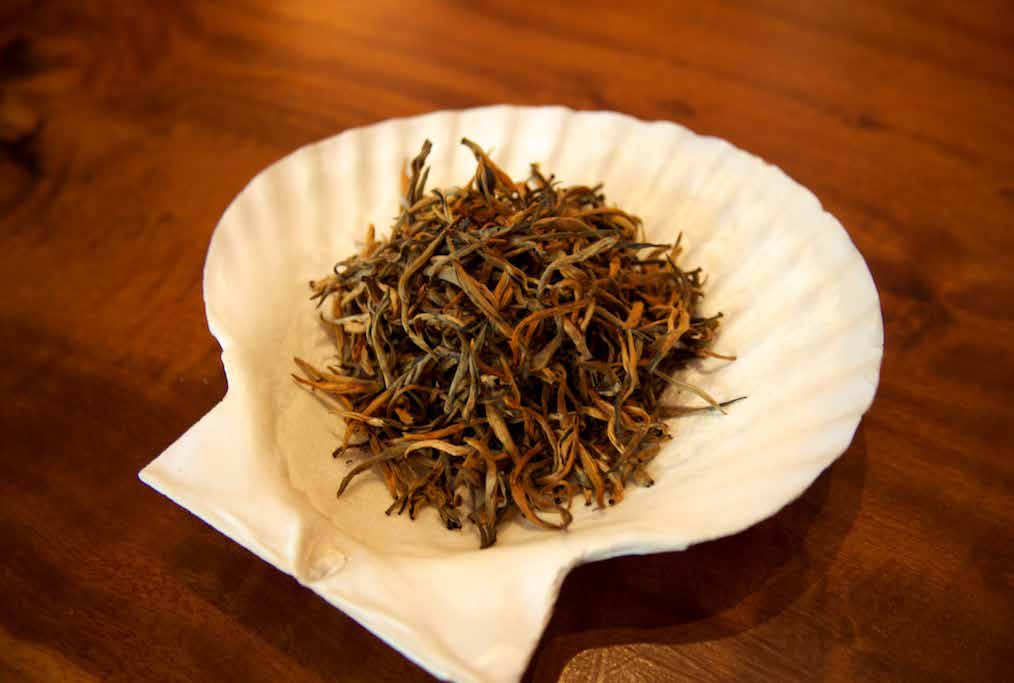 Golden Monkey tea is the Red version of the famous White Tea called "Silver Needle", which originally comes from Fujian. Silver Needle is an all bud tea, renowned for its amazing fragrance and light, uplifting liquor. The buds are covered in downy white hairs before they open, lending the tea its name. Golden Monkey is produced in both Fujian and Yunnan, as is Silver Needle (though the Fujian variety of Silver Needle is considered far superior). To make Golden Monkey Red Tea the same white buds are oxidized in piles, but not rolled at length like Red Tea usually is. Much of the Golden Monkey tea in Yunnan comes from plantations and is rarely organic. For that reason, it often has very strange energy and we have found ourselves uncomfortable drinking it on many occasions throughout our travels in China.

This special tea of the month is made from wild, old-growth trees in the Jinggu area, known for their white furry buds - a natural mutation. Most Golden Monkey tea comes from small leaf varietals rather than large leaf trees. These special trees are often referred to as "Big White Fur (Da Bai Hao)" and are some of the only wild, old-growth trees in Yunnan to have downy white hairs and sweet, juicy buds. Take note of the amazing hairs all over these buds. A tremendous amount of work went into picking only the un-opened buds of these large trees, as a single kilogram contains thousands.

Golden Monkey is made by piling and oxidizing the white buds until they are golden in color. This tea was masterfully oxidized, which isn't easy at all. The oxidation of these leaves was controlled by a true genius who was able to preserve the delicacy of the buds, while also bringing out the golden depth of a fine Red Tea. This is one of the finest Golden Monkey teas we have ever come across.

The liquor is golden with reddish hues. There is a bouquet of fruity, peachy and flowery flavors in this tea and it also has all the Qi and power of an oldgrowth, living tea. The energy is light and Yin, uplifting and celebratory, like the first spring warmth - the day when you first put on your summer clothes. If you like, you can steep it with less leaves for a shorter time and get a light, delicate cup that is transcendent. You can also add more leaves and steep for longer, to get a deep red tea that is thrumming with amazing jungle energy. Both are incredible experiences.

We hope this tea brings you as much joy as it has us. We always loved the malty, earthy and delicate flavors of a good Golden Monkey but have rarely had the chance to drink a good example lately as so much of this tea is inorganic plantation tea. We were very fortune to come across a quantity of this rare treasure and immediately thought of sharing it all with you, our global tea family. Like us, share it with some good friends, maybe somewhere in the sun. You will find yourselves smiling, entranced by the healthy, living energy and the drunken deliciousness this unparalleled tea has to offer. We wish you a thousand, thousand such cups - deep smiles and satisfied completion included...