This month's tea is filled with the love and care of some amazing people we'd like to introduce to you. Many of you who have been to our center know about the great influence Master Tsai has had on all that we do. He is a teacher, a brother and a great tea sage - one that will surely constellate our sky along with the tea masters of ages past. He shares tea and wisdom with a spirit we tea lovers have all encountered, freely given the way tea trees open their crown and offer leaves to passerby. When you begin to understand how lovingly tea longs to be human, you more easily recognize its spirit shining in the eyes of tea brothers and sisters like Master Tsai. 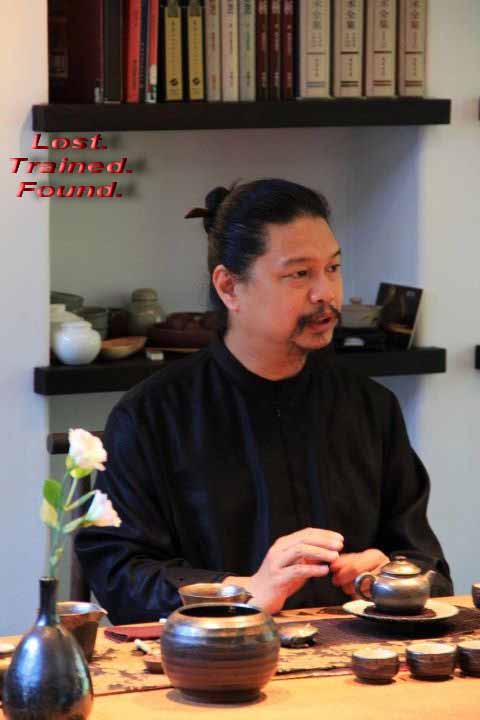 Master Tsai studied tea for more than twenty years, often dreaming of a place where he could share his bliss with others. He knew that wisdom is nothing if not shared with the world. Of course, the Dao made way for him and his Long Cui Fang (櫳翠坊) teahouse was created. The two characters "Long Cui (櫳翠)" in the name come from the classical novel Dream of the Red Chamber. It was the name of the place where one of the characters, Miao Yu, lived. Miao Yu was the one who understood tea best.

Amidst the hustle of Taipei, Long Cui Fang is a gem. There is no sign or billboard outside. It is tucked away in a small alley, and known only to those who seek. Tea is by appointment only, and when you arrive there is not any tea for sale on display, only spirit.

As you read this you might be wondering if this is an advertisement, which would run contrary to everything Global Tea Hut stands for. If you are asking yourself whether you will have to read about teahouses and/or vendors every issue, don't worry. We can't advertise Long Cui Fang to you because we have never felt that it was a place to simply go and buy tea. Master Tsai is generous with his tea and wisdom, and the fact that all the tea is kept in a back room where it won't disturb those who are there to enjoy a cup of pure tea says a lot. He donated this month's tea with great enthusiasm and joy, and not a trace of self-promotion. We are full of such gratitude and praise for him because of how much he has taught us, and because the praise is honest and worthy.

Master Tsai's card expresses his philosophy best: "Lost, Trained, Found". In his words: "In this loud world, full of such dust, we all lose our heart (lost), after cultivation (trained), we again find our heart (found). One day we naturally breathe in and then out, realizing that we actually never lost anything. Our heart was always with us!"

Master Tsai has done a lot to promote organic teas, helping farmers get certified, convincing them to change to sustainable agriculture, and even buying trees in Wuyi to protect them. He does a lot of work in sustainable tea production that we, as foreigners, could never do. And he does it selflessly and with a humility that fills the room. With a full and open heart, we pray that all of you have the chance to meet and learn from him - to be changed by his wisdom and loving-kindness the way we have been. April's Tea of the Month

We have been discussing a lot about socalled "real" tea: propagated by seeds, in ecological gardens where the trees are allowed to grow up large, and given the space to do so. But as we mentioned before, this kind of tea has a glaring defect, which is that there will never be enough of it for us all. For that reason, we'll need some plantation tea as well. And this issue isn't black or white. Don't dismiss the quality of properly grown, organic tea - plantation or otherwise! Remember, we like to focus only on whether a tea is living or not, and this month's tea, as you'll soon see for yourself, is definitely alive. Our Tea of the Month for April is a green oolong (Qing Xiang) from Central Taiwan. These lighter oolongs are a great introduction to Taiwanese tea. They are fragrant and clean, with a refreshing aftertaste. And when they are organic and alive, like this one, their simplicity and clarity draws you in.

Our tea was grown in Nantou County. The farmer's name is Mr. Xie, and his family has been growing and producing tea for three generations. Besides their greener oolong, presented here, they also produce traditional charcoal roasted teas, GABA, and even some red tea. Perhaps we'll have some of their other teas for you in future months. In 2002, the Xie family farm passed MOA certification. 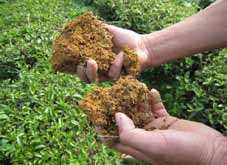 MOA stands for "Mokichi Okada Cultural Services Association International." It was created by Mokichi Okada (1882-1955), who started three great projects in his lifetime: a "Mokichi Style Detoxification Treatment" for land, "Natural Agriculture, Drinks and Food" and "Fine Arts and Culture". These three projects created affiliated groups of people with common goals to help each other. His overall aim was "to allow humanity to expand and flourish, helping create healthier people, families, regions, countries and culture". His Japanese NPO natural agriculture culture movement created the Da Ren farm in 1982, and then in 1991 developed standards for healthy, organic agriculture. They began to set up branches and create a social system for theory and practical cooperation amongst farmers in Japan.

In April of 1990, a group of people who cared about Nature and were concerned about environmental pollution wanted to change the situation in Taiwan. They joined the Japanese MOA International Association and created a sister organization to educate farmers and legally certify organic foods and drinks. This Taiwanese foundation was formed to explore and seek health and happiness for mankind and to guarantee environmentally sustainable MOA natural agriculture, expecting this ideology and the sustainable agriculture techniques behind it to spread all over the world. 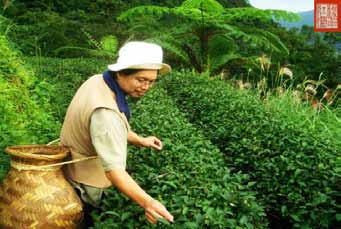 MOA certification is rather rigorous and they do a great job of ensuring sustainable, organic agriculture without much of the bureaucracy or financial interests that trouble a lot of organic certification worldwide. Watching for the MOA certification on teas is a good way to enter the world of organic Taiwanese teas.

Master Xie's farm is a beacon of light for tea lovers. He truly loves tea and cares about the earth from which it springs. He knows his tea is alive, and that his conversation with it will play a large role in its development, as a parent's efforts greatly influence the adult any child is to become. And from his hands this tea was "Lost, Trained, Found" at Long Cui Fang, where it sat amongst other great works, and a spirit as close to tea as any other. We hope that you feel some of this life in its embrace, and can recognize all the care within it. I look deep into my cup and see the faint image of these great tea sages reflected there, like the past legends that have gone on to become stars...