All Puerh tea comes from Yunnan province in the Southwest of China, a magical place. It is home to twenty-five percent of all species, plant and animal, in all of China. Mystic and vibrant, it is a blossoming of life, rain, aroma and growth. It is, in fact, the birthplace of all tea, and home to more varieties of tea trees than anywhere else on earth. Yunnan is a series of stepped plateaus, the westernmost of which neighbors Tibet. The waters that flow through this region all originate within crystal mountain springs and glacial streams high up in the Himalayas. Puerh is unique for several reasons.

There are two large families of tea trees: large and small leaf. Large-leaf trees have a single trunk, deep roots and can live for thousands of years. Small-leaf varietals have a single root system that expands horizontally, for the most part, and several trunks - more like a bush. They don't live as long. Puerh is the paragon of the former, large-leaf, old-growth trees. These ancient trees grow up in the jungle, connected in harmony with insects, plants, snakes and animals. They are also covered in hundreds, if not thousands of species of microorganisms, even before the leaves are picked.

There are two kinds of Puerh tea: sheng and shou. Puerh tea is picked, withered (to oxidize and dehydrate the tea), fried (to kill green enzymes that make tea bitter as well as to arrest oxidation), rolled (to break down the cells and expose the inner essence of the tea), and finally sun-dried. If the tea is then left to ferment naturally, in conjunction with the endless microbes in it, it is called "sheng" or "raw" Puerh. If the tea is then piled and sprayed with water, covered in thermal blankets and turned in order to artificially ferment it, it is called "shou" or "ripe" Puerh. This tea we've given you from Mt. Ai Lao is a sheng tea, though a very unique one.

Ai Lao is amongst the most remote areas of Yunnan. It is also one of the highest, peaking at 3200 meters - the second highest in Yunnan after Mt. Wu Liang. Most Puerh tea comes from the areas of Xishuangbanna and Lincang. This underdeveloped region has been left alone, uninterrupted by the great Puerh boom that has transformed so much of the region, and often for the worst. The roads are hardly more than climbing, dirt paths, the people and forest untouched til now. The altitude and rocky soil make the trees here unique amongst Puerh - lacking some of the vibrancy of the lower jungles, but gaining an affinity with the minerals of the mountain, as well as the sun and moon.

This tea comes from a village about 2500 meters up. The trees are all wild and semi-wild and age from 200-300 years old. What makes this tea one of the most unique Puerh teas we have ever encountered is that first the village is a co-op, working together to protect and preserve the tea. This situation prevents the greed and environmental destruction that has plagued much of the Puerh industry in the last 10 years. And secondly, these villagers have developed a slightly unique processing methodology that they say is in response to the tea. Adapting processing over time in response to particular varieties of tea is common throughout China, but very, very rare in Yunnan. Puerh tea has always been much more about the trees and much less about the skill of processing the tea, which is one of the reasons it was often dismissed as a lesser-quality tea before its sudden explosion into popularity in the early 2000's. Therefore, much of the differences in Puerhs lies in the trees. And since farmers do not adapt their processing to suit the season and weather as much as other regions, you can sometimes find small faults in a particular region's tea from year to year (which are usually mitigated by aging the tea). It is incredible indeed to find a Puerh tea processed in a slightly unique way, especially consciously in an effort to improve the tea.

This tea goes through a slight piling immediately after being picked, akin to red tea. Don't confuse this piling for the post-production, wet piling of shou Puerh. Red tea is piled after it's picked to increase oxidation. With red tea this usually continues for twelve to twenty-four hours. With this special Puerh tea, however, the piling of the green leaves was only done for a few hours. The more heavily-oxidized tea was then fried, rolled and sun-dried like normal Puerh. The added oxidation gives the tea a greater depth and sweetness, and the liquor is a deeper golden color. You can still taste the depth and beauty of the old trees, though.

Everyone at our center has a special relationship with this tea, which is why we chose it as our first tea of the month. It is often a tea we take out and serve when we set up our stalls. It warms and lingers, filling you with its living presence. If you are sensitive you can taste the altitude and the special relationship this tea has with the moon, living in areas that aren't as deeply forested as southern Yunnan (nor as barren as other high-mountain teas like those in Taiwan). After 2004, some of us were in despair, watching greed and corruption run rampant throughout Yunnan and cause so many environmental problems. This was one of the teas that restored hope, bringing light: a village working together as a co-op, making decisions as a group and with a spirit of preservation and sustainability. 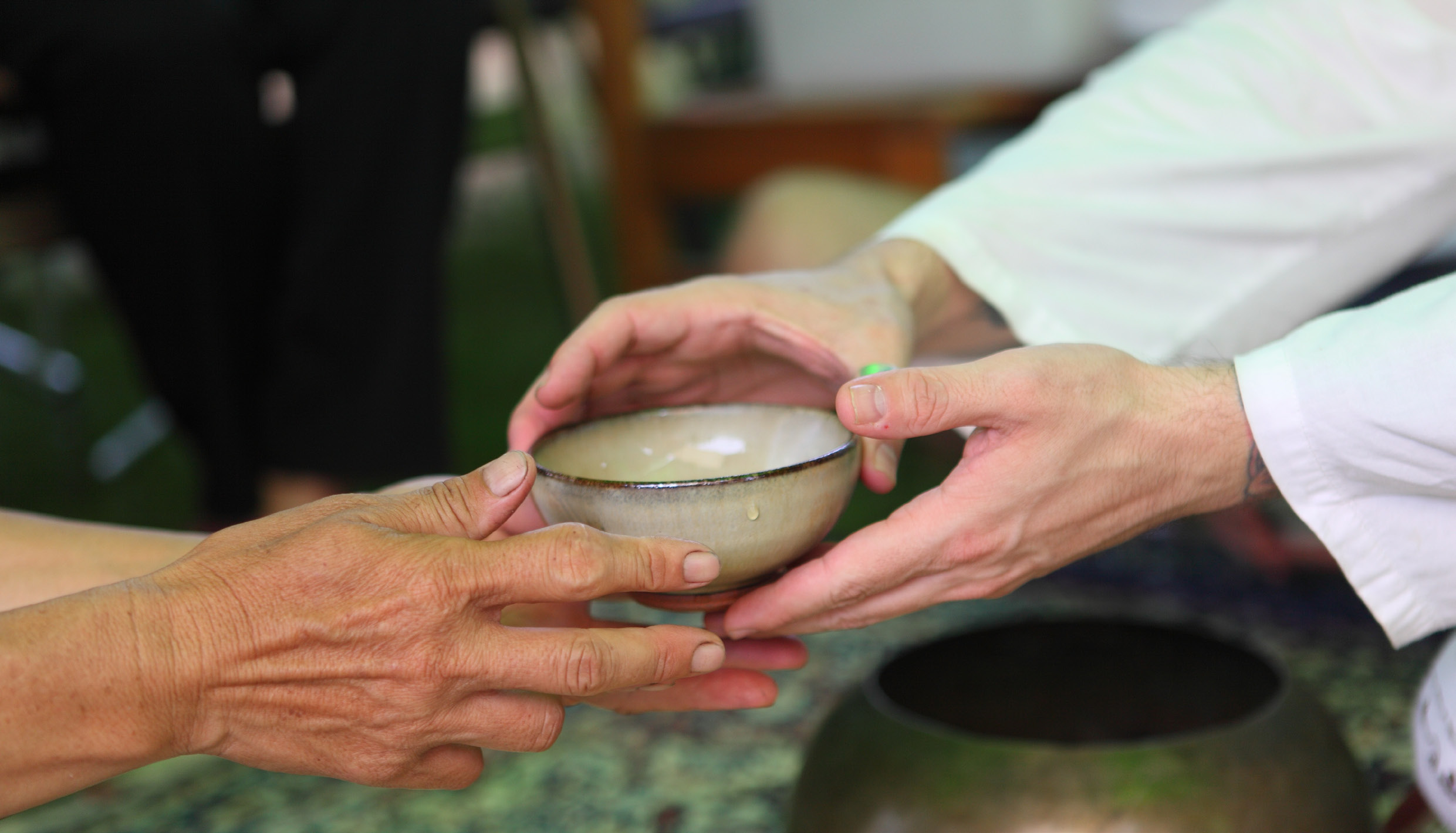 Like people, tea gets a bit ruffled up flying around the world. Better give it some time to get over its jet lag before drinking, a week or two should be fine.