When you begin down an Eastern path, and Cha Dao mostly heads East, you quickly realize the important role language can play in our thinking, and consequently our insights. For the most part, we come to love the ancient spiritual words in languages like Sanskrit and Chinese - for their subtlety and breadth. There is one English word we've come to like better than its Eastern equivalents, however: "Enlightenment". When most people think of "Enlightenment" they see in the word the "light" and are reminded of the divine light in us, which we all travel towards. But "light" in English has another meaning: not heavy! Being enlightened means, literally, lightening up! Don't take yourself serious, or anything else for that matter. There is an old Indian saying: "Beware the spiritual man that takes himself seriously!" And many of you know how we here do so love laughter and humor. We thought that these newsletters might be getting a bit heavy now and then and that we would en-lighten them up.


Confucius said: "Is it not delightful to have a GTH envelope coming from distant quarters?" (Confucian Analects by James Legge, 1893

Lao-tzu said: "Opening a GTH envelope is like boiling a delicate fish. When the envelope is opened by the Way, Malicious influences lose their power" (Tao Te Ching by A. S. Kline, 2003)

They say that when Buddha was in Grdhrakuta Mountain he turned an envelope in his fingers and held it before his listeners. Every one was silent. Only MahaKashapa smiled at this revelation, although he tried to control the lines of his face. Buddha said: "I have the eye of the true teaching, the heart of Nirvana, the true aspect of non-form, and the ineffable stride of Dharma. It is not expressed by words, but especially transmitted beyond teaching. This teaching I have given to Maha-Kashapa." Though there are many uncertainties about the interpretation of the materials in that envelope, it is widely recognized to be a Global Tea Hut monthly envelope. We hope that further studies will throw more light on the matter.

Vietnamese Zen Master Thich Nhat Hanh teaches us: "You must be completely awake in the present to enjoy the GTH Tea of the Month".

There are also Three Jewels (Ratna-traya) as refered to in Buddhism: Tea, Gift and a Newsletter.

I always knew this wisdom was here: I remember once, when I was a kid, I asked my father what a big metal bird in the sky was. He told me then that it was a Magical Bird (presumably Crane) Lu Yu sat on to carry GTH envelopes to each member around the globe (Siberians did know the Earth was round by then). I didn't know then it was my destiny to become a part of this Tradition, but these words somehow echoed in my heart.

I still remember the day I got a GTH envelope for the first time, like it was yesterday. I recall it especially clearly because it was the day after another winter day in Tomsk (If checking Google Maps try looking to the West of In-the-middle-of-nowhere). When I found myself holding the envelope, I felt a great power. I knew there was something inside for sure and felt it was huge, something that could change my whole life. I felt like pronouncing myself the High Priest of a new religion. And right at that moment, as I was imagining beautiful clothes covering my body and the golden throne I would sit on, my wife came over and asked what I had received. I was afraid she would like the clothes for herself and told her it was an invitation to the wedding of my boring uncle Ilyas because I was sure she would definitely not be interested in that.

The whole next day I was excited. I was walking around ruminating on the new life I was about to start: all the women were mine, all the bullies (plural) from high school were down. I went to the kindergarten and told the nanny I would never sleep in the afternoons again (and even made her go to sleep), because my power was limitless. But then I remembered a phrase from some very wise book an old shaman once gave me: "With great power comes great responsibility!" Responsibility was something I definitely didn't want to take, and though one part of me was telling me that with that power I would be able to cancel the responsibility part, the other was strong enough to make me share this power with friends and family.

From that time on, surprisingly, my life has indeed changed: women have started to come to my apartment (without any problems from my wife), guys from the neighborhood have stopped taking my lunch box and started to show up at my tea table instead. I've also got some nice shorts my master was wearing while giving seminars in Novosibirsk. Even boring uncle Ilyas and a wonky Buddhist named Denis (also haunters of the Hut as I learned later) look friendlier now.

Month by month the tension has loosened and I have finally told my wife that uncle Ilyas neither got married nor invited us. (She was not surprised, to tell the truth.) At first, I really worried about all this positive change, because it meant I was becoming a better man and I knew for sure from the American movies that happiness meant the end of the story...

Drop by drop, such worries have left me too. I felt my body getting thinner and thinner, my mind wider and wider... until the moment I left my physical body and transformed into formless consciousness. I can travel limitlessly now, coming to all of you to share a bowl (and of course stare at you when you're taking a shower). I can even get into some people's minds and tell them what to do (This is, by the way, how I am writing this essay right now: poor guy with a weird name, "Kaiya", really believes the whisper in his head is Divine Wisdom. He is typing this, not me.)

Oh, I am sorry, the nurse has come to give me my pills; it's time for me to go now. To the nurse: "This is how you treat a holy man, Lindsey?! You promised me a comic book yesterday! Marrs-Man?! Okay, sounds nice!"

P.S.: Few of us know it, but after receiving a transmission from the Scandinavian Gods, our master (aka "Grandfather Stone") had to change his eye for a stone one that grants him the power to look beyond what the worldly man can see. I have proof: 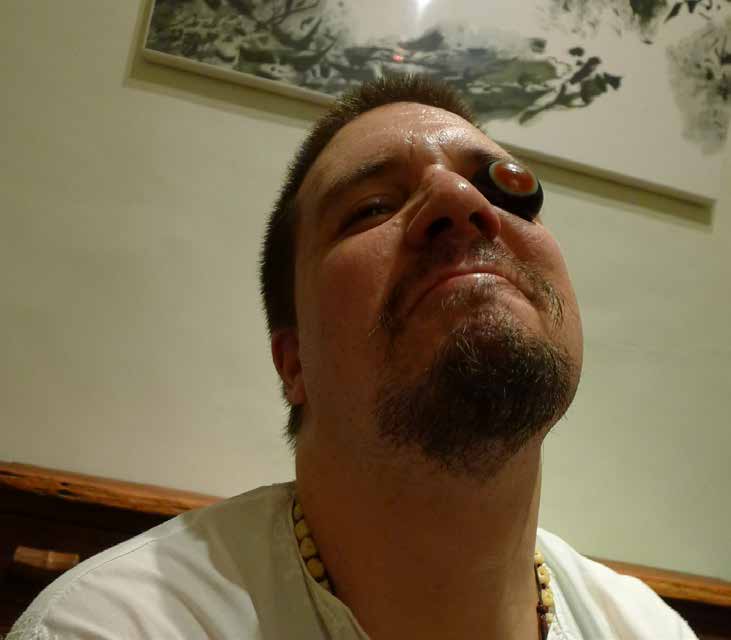