This is our nineteenth month of Global Tea Hut, and up to now we haven't repeated a single tea, providing eighteen unique experiences, energies and sessions for you all! And you can rest assured that we will continue this trend: finding new, rare and exciting teas to help educate you about different genres of tea, methods of production, regions, roasts, ages, etc. After all, there are so many amazing teas we hope to share. But there is one tea we will repeat every year, as it is so close to our heart, and so much a part of what we do here at the center and in our courses abroad as well. Almost everyone who visits our center leaves with a free bowl and a bag of this tea, as it is the perfect tea to start out a journey, and a great companion and friend even for those who have traveled some distance. As a result, there are tea brothers and sisters around the world who were first introduced to Tea through this magical leaf. So whether you are meeting Her anew or celebrating a reunion, please join us for a bowl of 2013 Sun Moon Lake Red Tea... 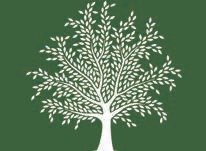 In the first half of the twentieth century, the Japanese were in control of Taiwan and looking to develop the island agriculturally, exporting goods to help fund the rise of their empire; and tea was to play a large role in this. They brought large-leaf tea trees from Yunnan and Eastern India and planted them in Sun Moon Lake, hoping to establish Red Tea plantations there. However, war soon began and the Japanese were later expelled. The tea gardens were left untended for around eighty years, producing semi-wild offspring. These magical trees took on all the power of this magical place, absorbing the minerals, sun and moon, weather and energy. Eventually, people began to tend these wild and semi-wild gardens again, producing an amazing Living Tea. 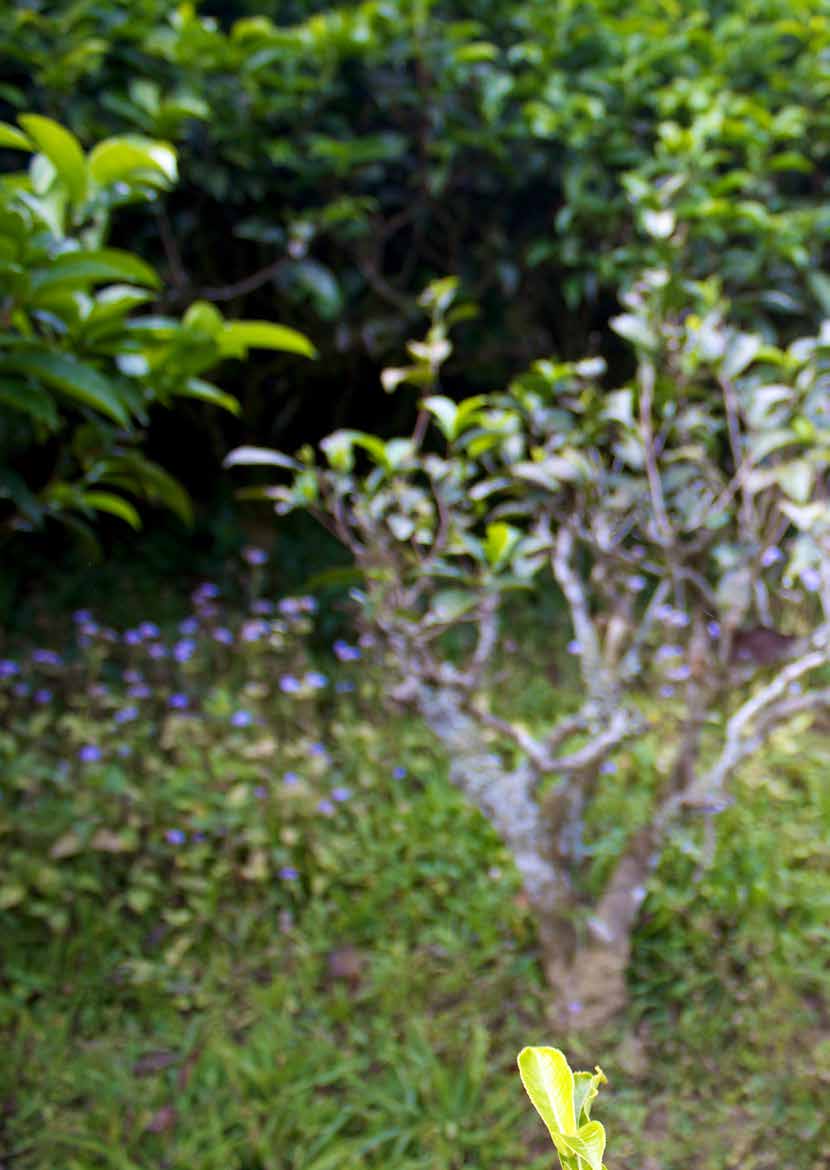 Our Sun Moon Lake Red Tea is organic and ecological, containing all of the characteristics of Living Tea:

Perhaps, it would be worthwhile to review these briefly, as they are central to a life and understanding of tea ("renew" is a better word!).

First, all living tea is seed-propagated. As we mentioned in previous issues, tea is a sexual plant and a lot goes into creating the seeds - a tremendous amount of natural energy, mostly involving insects and cross pollination. Every seed is unique, and every seed-propagated tea tree will also be an individual soul. In fact, that is why so little tea is seed-propagated today. Commercially, farmers think that consumers are ruled by their palates and want flavor uniformity. Is that true? Do you really want to throw out so many potatoes and carrots because they don't fit unnatural cosmetic standards? Or do your realize that Nature is wiggly, and that the magic of tea is that it is different every time? It is also more work to tend a variety of trees with different needs. The vitality, however, is very different between cuttings/clones and seed-propagated trees. First and foremost, seed-propagated trees live longer by orders of magnitude - think centuries or even millennia versus decades - and, moreover, birds won't eat the seeds of cloned trees after the second or third generation.

Second, all living tea is given room to grow. Living things grow as large as their environment permits. Koi fish will remain small if kept in a small bowl, but grow big if they are in a big pond. The same is true with Bonsai trees. People are that way too: we only grow as much as we give ourselves room to... Every plant has a ratio between its roots and crown, and when you prune the crown the roots also shrink. Plantation tea is pruned for easy picking. Some living tea compromises on this issue for practical reasons, viz. a single farmer can't possibly climb and harvest five hundred trees on time - he would be too slow and miss the picking window. Our Sun Moon Lake tea is pruned, for example. But there is still space between the trees to extend their roots and grow healthily. The tea trees organize themselves, in fact, in a living garden, rather than being forced into rows like on a plantation. They know which soil is more nutrient dense, and can have more trees clustered closer together, and which is less so, and therefore they must grow more spaced apart.

Third, all living tea is ecological. It includes a vast array of biodiversity. We always think that in controlling a few factors in a monoculture system we can generate sustenance for ourselves, but the overall impact is always more complex, intricate and subtle than we could ever imagine. And as we are finding out, our destructive intrusion into natural ecologies is having many larger and unintended "Red Tea" or "Black Tea" effects, over time and space. There is no saying what the true relationship is between the weeds, bugs, snakes and even snake poop and tea trees. How are the local squirrels related to the tea trees? It may not be apparent, but if they cohabitate in the same environment, they are related. Maybe the discarded nutshells help fertilize the trees, or maybe it is more complex by one or many degrees: maybe the nutshells are food to a certain insect that attracts a certain kind of bird which sings in a way that tea trees enjoy, helping them to flourish? True tea is ecological: you cannot distinguish the tea garden from the surrounding forest! Fourth, and the most obvious, is that living tea is chemical free. The evil triad that pollutes our earth, animals, birds and people is not sustainable and not a healthy compromise. It doesn't matter that a study proves that such pesticides can be consumed by people without quantifiably detrimental effects. First off, they destroy the environment, often running down the mountains and harming other ecologies as well. Second, what are healthy amounts? And how long was the study? Maybe the participants showed no deterioration of health after a two-year study (which would be a long one), but what happens when you consume pesticide-laden tea for ten years? Such chemicals are unhealthy for people and harmful to the earth. They defeat the purpose of tea, which is to bring Nature to society. Master Zhou Yu always asks, "How can you sit in a beautiful tea room and connect to Nature, when the thing you are using to connect was produced in a way that destroys Nature?" 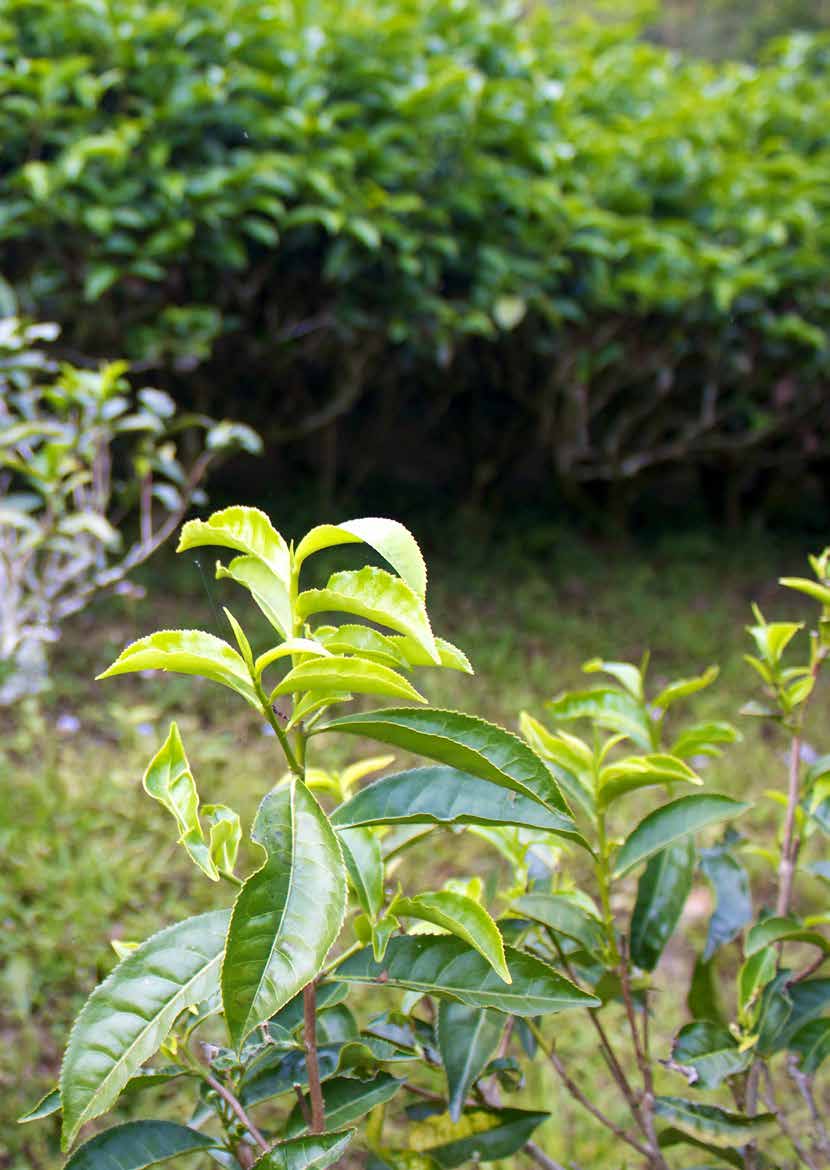 Finally, tea is a conversation between people and Nature. In the Chinese character for tea, the radical for 'man' is right in the middle. Tea was traditionally always respected. Each tree was a unique being, with life and spirit and treated that way. Most farms don't treat animals or plants in that way anymore. There is no respect for the individual being in any of the trees - you can hardly tell where one ends and the next begins on most farms. It is just uncountable "tea" - product, value, stuff, object for consumption, etc. Our Mr. Shu, who produces this month's Sun Moon Lake Red Tea, is as good as they come in this regard.

Mr. Shu is a second-generation farmer with an incredible attitude. Many of his neighbors have increased yield by switching to plantation-based, inorganic farming practices, but he would rather live simply and in harmony with Nature. While his neighbors constructed new-andimproved houses with satellite dishes, he stayed humble, simple and in love with his work and trees. This year there was a drought and bugs that decimated the area - insects that come only every decade or so. When we talked to him about it, he responded with great wisdom, proving that - like the ancient Daoist texts - even the simplest people can achieve harmony with the Dao, mastery of life and a great wisdom that we all can learn from. He said that this year he received less. If he were to stress about that, or worse yet compromise his values and turn to pesticides for help, it would be like rejecting his destiny, arguing with Heaven. Furthermore, he said that it would show how ungrateful he was for what Nature had given him. "We should be grateful for what Nature provides and accept the times that Heaven takes from us - learning from times of having less, or even losing what we have, as much as in times of abundance. We all will face lack and loss sooner or later. If you resist and argue with Heaven that your destiny is unfair, you don't learn and there will be greater misfortune later. Better to accept whatever Nature gives us and be grateful for it. I have less this year, but it is okay because I saved when I had more last year; and maybe next year I will have more again." There couldn't be deeper life lessons than these!

Most Red Tea is processed in 3-4 phases: first it is picked and then it is withered in large piles. Most tea is spread out when it is withered, but Red Tea is piled to completely oxidize the leaves. It is then rolled for an exceptionally long time, to continue the oxidation and break down the cells. It literally turns into a pasty mass in the process. Then it is dried, usually in an oven. Our tea, however, is completely different. The farmers think we are crazy, but we reduce the withering/piling period and the rolling period, leaving some green in the leaves, which you will see when you brew them. The reason for the complete oxidation in normal Red Tea processing is to make the tea sweet and delicious. Nevertheless, we have found that such extreme processing removes some of the tea's Qi, and distances it from the mountain and deep essence it touches. The leaves of these large-leaf trees are often bitter and astringent, but we can accept a bit of that along with the sweetness, can't we? And isn't that a significant life lesson as well? In the end, we'd rather have a slightly less delicious tea with incredible and relaxing Qi than the other way around.

We recommend putting these leaves in a bowl, watching them unfold in the oldest brewing method around, older than the pyramids in fact. It is a great morning tea, leaving you awake, bright and calm. Try waking up a bit earlier one morning, alone or with some loved ones. Put more or less leaves in your bowl, to your taste, and fill it with hot water. As it steeps, have a moment or two of meditation. Then pass the bowl between you, sharing a single bowl as you share a single encounter, a single chance... 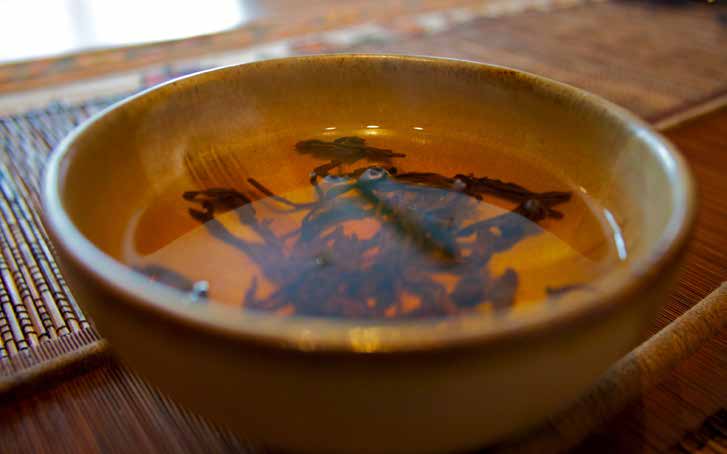 It is important to understand that what most Westerners call "Black Tea" is actually "Red Tea". Ordinarily, it doesn't matter what something is called, but in this case there is actually a problem, because there is another kind of Chinese tea that is called "Black Tea" (characterized by post-production, artificial fermentation). So if you call Red Tea "Black Tea", then what do you call Black Tea? The reasons for this error are to do with the long distances the tea traveled in chests to Europe, and even more importantly with the general lack of information for the first few hundred years tea was traded. Europeans weren't allowed inland in those days. They never saw the tea trees and rarely its processing either. Buying through middlemen in broken pidgin, you could see how easy it would be to spread misinformation. But you can correct this centuries-old error by saying "Red Tea"!
As we mentioned in previous months, we recommend letting the tea get over its jet lag. Let it sit a week or two and become acclimatized.