In my wildest dreams, I never imagined I would ever be so far north, sharing tea with Siberians. And as the miracle of life has unfolded, and I now find myself looking down on the Gobi and Mongolia - heading home to Taiwan - I feel just the opposite, like it couldn't have been any other way; and like the people and places I've made friends with have always been in my heart. I want to share some of my journey with you, so you'll know and love your Russian tea brothers and sisters the way I have come to. And hopefully you will also be inspired by the awakening of the heart that is happening all over the world, and tea's great role in this change.

Siberia is an ancient land deep with a power and wisdom all its own. The word "Siberia" in Russia is akin to "suffering" as it has long been a place where prisoners and dissidents went to escape civilization. The weather is harsh, of course, and many of my new friends like to joke that Siberia has no summer but two winters, one white and one green. There is a mystery in the people here, as they seem on the outside to mirror their environment's cold harshness, only to erupt in love, joy and laughter at the slightest tickle. You've never, ever been truly hugged until you've been hugged by a Russian.

And then there's Nature itself, which extends on and on - way beyond any words I could ever put to paper, and whiter still. The forest has a living mind, and you know how easily its imagination could swallow you, even looking out at the great expanses from the window of the train. Here the cedars ring and the white birch everywhere dance to their songs. Having a bit of Native American blood myself, I couldn't help but look out and wonder how my everso distant ancestors survived winters here: I see their black eyes full of firelight through the fire smoke, but I can't read them. They are too mysterious and we're too far apart, as if that fire spanned an abyss.

Our first stop was amazing. We traveled to Irkutsk by Trans-Siberian rail, covering more than a thousand kilometers in twenty-four hours. The endless hills and forests and rhythmic rocking of the train put me into a kind of timeless trance. Endless tea prepared by my student Max made the trip magical, and as the spirit of tea returned to me - or I to it - I began to see why it had summoned me to this distant land.

And then all the doubts and all the wonder I had felt about my trip to Russia exploded when we stepped down onto the platform from the train and into the huge hugs of the two Romans. I don't think that any of the writing skills I've ever had would suffice as far as these two go. In Russian, the name "Roman" is pronounced "Roma". And these two Romas have been great friends since childhood, binding them in so much more than name alone. I instantly understood that I had loved them long before we'd ever met in this incarnation, as if our brotherhood echoed in my soul, telling me of other teas drunk in other times. And nothing, not even the language or cultural barriers, could keep it in. Have you ever loved someone instantly? Have you ever felt the inexplicable sensation that someone you just met was already in your heart long before you met them? Meeting Roma and Roma was like that for me. It felt like they were manifested projections from out my own heart, and though we grew up at different times and on opposite sides of the world, and even at a time when our countries were actively disagreeing with one another, they were my elder brothers the whole time. Right there on the platform we were having a family reunion after a lifetime apart. The Romas are not only best friends, but they

work together. They own a chain of rehabilitation centers where people come to be healed of various spiritual and/or psychological problems - everything from drug addiction to losing weight and learning to eat healthy food. They told me something that inspired me to the core: they have had great success in using gongfu tea to help addicts achieve and maintain sobriety. For me this was like coming full circle, because my first clear and living spiritual memories are all associated with my own time volunteering in such rehabilitation. I was helping addicts before I was serving tea, and so seeing the tea work together in this magical way touched me very deeply.

We held an excellent workshop at their headquarters and many people were changed by the tea. After we left, Roma sent word that Irkutsk was drowning in a giant wave of tea spirit. We also got to spend some time in the mountains near Lake Baikal deepening our understanding of why we were brothers, and from whence these powerful bonds.

Both of the Romas (Roma y Roma) are powerful mentors to me, and I have been forever changed by their love. I admire all of what they are doing so much. They are great lovers of tea; and therefore, if you look deep enough into your own bowl, you might just find them there. I know I sure did.

Back in Novosibirsk we held one of the most amazing tea workshops of my life. It felt like one of those momentous spiritual gatherings in which all those present have waited lifetimes to meet and hold council together. The two days slipped in and out of time, as we drank liters of great tea, and often felt timeless - like we had been sitting in the tea house for years. Originally, we planned to meet from 10am to 6pm, but both days we found ourselves still drinking tea at 10pm. It was a magical gathering, and everyone left in a very calm, loving space.

More and more I find that what we are doing with this tradition is just a part of the movement of the Heart into the consciousness of the world, and that tea is just one of its mediums - for me, the best. I keep meeting people that I know are already embodying tea spirit, and manifesting it in their own way. And as tea becomes human, it never, ever stops with the transformation of that person alone. It ever and always wants to be shared, affecting all those who come near the one who is filled up with it. Teaching through a translator was an incredible experience for me. Firstly, it forced me to slow down and be more aware of my big mouth. Secondly, it allowed me to watch more carefully as the people took in what I was sharing, which is not usually possible when you are speaking. It is amazing to say something and then be afforded the chance to look on quietly as the person absorbs what you are saying.

The spiritual readiness of people in Russia explained why I had been summoned there, and why the soil is so fertile for tea. Very soon we will have a sister center and all our websites and materials will be translated to Russian. Of course, volunteers were coming out of the woodwork. Most places I go, people can feel the transformative power of the tradition I bring and many of them tell me they feel like they've been a part of it since before they met me. I tell them that it's because this tradition comes out of tea, and they were already drinking tea, of course.

And that brings me to the second great insight of my trip. More and more as I hold these workshops, I find that when I say something from the depth of tea - in the ancient way - the person looks up at me and says, "That's like when I...." and then goes on to relate some specific tea-related application of the wisdom I am trying to convey as it was previously manifest in their own personal experience. They already knew it, in other words. And they knew it in their own way, and in a living way much more powerful than the traditional stories I've come to tell. The tea taught it to them. They just hadn't articulated it before. This happened several times with the Romas, and again in Novosibirsk.

In Tomsk we held our final workshop, and I can't think of a way I would have rather spent my last day in Siberia. We drank tea all day, and I was once again honored to share my love for the Leaf. Russian teahouses have a very casual atmosphere, and are as much social clubs as they are places to enjoy and learn about tea. There are cushions all over the floor and people are as likely to sit cross-legged and look at you attentively as they are to lounge about or even lay down completely. They feel wonderfully at home in them, and I later found out they have "movie nights" like we do at our center, which made me smile to no end. The casual vibes in public places make Russians seem very warm. On the train, people walk around and share food with everyone else. Max wasn't just making tea for me on our long train journeys, but very often carrying the traditional Russian glasses clanking to a neighboring compartment to share with a sweet old lady or two. I loved how comfortable people felt during our workshops in Novosibirsk and Tomsk, enough to lay down and listen with a contented smile while their neighbors engaged me with intense, and often deep, philosophical questions. 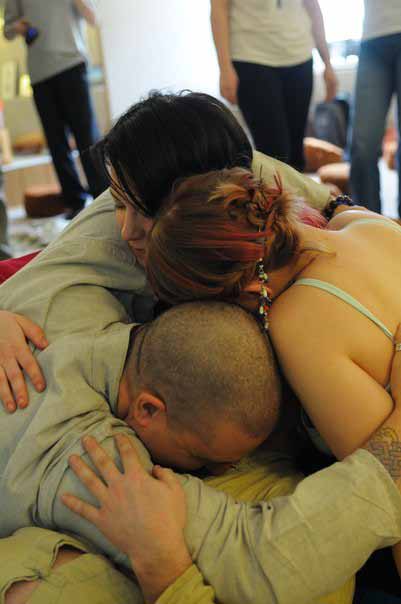 If my account of my time in Siberia seems over-emotional or too full of flattery, think again. I honestly believe that I have not only not exaggerated anything, but perhaps even undervalued the love for tea in this account. I leave a bit lighter, having left a chunk of my heart behind in Russia.

And so, let us raise our cups to our northern tea brothers and sisters. May the seeds of this tradition grow strong and beautiful in Siberia. May the people there be awakened through tea to their true heart of presence and loving-kindness. And may tea spirit spread from there to all beings...