A tradition grounds us, giving us a foundation to stand upon and a sky compass to find our bearings. When we are lost we return to tradition, our center, for consolation, understanding and guidance. A tradition has a great heritage of collective wisdom hidden in all the canisters scattered around her hut, and she can always surprise us with leaves taken out of old jars we had never noticed before. The steam curls, the leaves unfurl and we find ourselves drinking a tea we never knew existed, but which is perfect, as though it has waited there in that jar just for us. We have accumulated into this tradition thousands of years of tea wisdom: some rediscovered and dusted off after much neglect and some handed down through the ages. There is a lifetime, and more, worth of guidance here - and not just in how to make tea, but also how to awaken harmony and insight as well as how to master the self. For that reason, we thought it would be nice to hold council with the wise old woman we call "Tradition" and discuss not just what we can learn from her, but how to relate to her in general.

There is a vast and deep discussion to be had over what exactly constitutes a "living" tradition. In the ancient Daoist texts, emphasis is placed on the fact that living things are flexible and changing, while dead things are rigid and firm. As a living being, a tradition should also grow and change rather than stagnate. We achieve a perfect balance, as a community, between innovation and insight on the one hand and preservation of the tradition on the other. This isn't easy at all.

Perhaps the most inspirational teachings on tradition and its application in people's lives come from the tribal, aboriginal peoples. Native Americans had many stories full of medicine concerning tradition. Sometimes tradition was indeed an old woman, other times a man. These stories are like a tradition itself: endless wisdom and truth hidden in the many, many pockets of her robe.

In one such story, there is a man who represents tradition. He takes a wife and moves out near the edge of camp. They have a son and daughter soon after. When the son and daughter get a bit older, the man grows frightened of them and kills his wife. He then abandons them and flees to another camp. The children are then aided by animals who teach them how to survive and give them some powerful medicine objects. Later they seek out their father and find him in another camp where the people are starving. They seek reconciliation, but he is still frightened of them. He tells the people that they should tie them up and leave them behind, moving away quickly. He lies and says that they killed their mother and are a bad omen, promising that after they move away they will be fed. The people follow his advice and stake the children to the ground. Once again, the children are helped by animals and freed. They soon after find some food and buffalo and send a raven to the people with food, inviting them to come and learn how to gather as they have. The people realize that the man lied to them and go off to where the children are. They make the children chiefs and create a new camp circle nearby.

The man in the story represents tradition - wisdom handed down through the ages. Getting married is symbolic of his relationship to the people. He is in the camp, married to the people, guiding and advising them. His first mistake, then, is to move to the edge of camp, distinguishing himself. Despite the slight distance, the people and the tradition work together, and they birth new insights - new life. This son and daughter are full of new perspective and wisdom. They begin to grow within the hut of the tradition. But the tradition gets scared of these new gifts and kills his marriage to the people, becoming a force all his own. He abandons the new wisdom. But it grows up just the same and comes back later seeking reconciliation with the tradition. Yet again, the tradition is afraid of the new gifts and tells the people to stake them up, which isn't necessarily killing them, but leaving them to the elements and what will probably be certain death. Nature comes to their aid, though, and they live and grow. Eventually, the people can no longer resist these new gifts, as they are starving without them, and abandon and/or kill the tradition and go off to start a new tradition with his children as leaders.

In many other stories the Old Woman, tradition, goes around stealing the people's braids to sew some kind of huge braid-robe. She plans to use this in some way to save the people from what is actually her superstition. The braids represent the people's experience - their personal wisdom. The Old Woman (Tradition) has good intentions, but she is acting out of a closed mind, out of fear. She steals the experience of the people to try to create a protective robe that she thinks will save them from some monster she fears, not realizing that the monster is a shadow of herself. And every child is born and starts living, growing new hair, which means her robe keeps getting bigger. We mustn't let our tradition steal our personal experience, especially out of superstition and fear. In these stories, it is usually a magic medicine man that defeats this outof-control old woman by turning his braids to stone so she can't cut them. He defies a tradition that doesn't allow his own experience, in other words.

There are two ways for a tradition to lose its life-force. The first is when the tradition abandons its marriage to the people and the children of that marriage. It must remain open, allowing for change as the times change. A tradition must also be open to including new insight. Otherwise, it becomes rigid and loses its connection to the living spirit. The wisdom must be embodied by all the members, and recreated anew each and every generation. This is how it grew in power over time, and if any one group forgets that and stops the flow, it will begin to wither. And though it may be a giant and powerful tree, it petrifies and no longer bears leaves or fruit, changing with the seasons. It's dead, old bark and its branches can still be used for shelter or firewood, providing warmth, but without a renewable source of life it will eventually be used up. We must be careful when our traditions disassociate themselves from the people and take on a life of their own, independent of the people they were once married to. A self-serving tradition is a nonhuman tradition, and often is cold, lacking in the compassion needed to deal with the lives of its members. 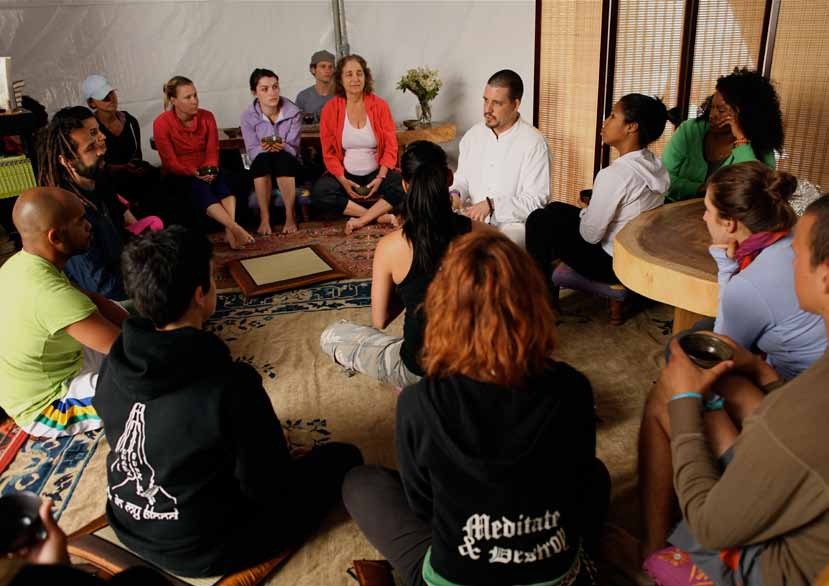 A living tradition holds council with its people, rather than moving to the edge of camp. A living tradition stays in the camp circle. A living tradition also has no fear of its children, which are the new ideas, insights and innovations that arise through its evolution, for it knows that these children not only make the tradition stronger, but they are its future as well. We are the living embodiment of this tradition, in other words, and it only lives as long as we do. To keep it alive, we willingly hand it off to the next generation of students to be a guide in the world they find themselves living in. They will draw from it, and they will also add to it!

The second way a tradition can die is just the opposite: by being too open. If we have too many other activities at our center here, then the tea wisdom will be lost amongst it all. Without some kind of boundary, the tradition is also diffused too much and is consequently lost. We think the Japanese symbol of an enso is poignant in this regard. The open circle has many meanings in Zen: it symbolizes that our circle isn't complete, even when we die, but always connected to other circles, which are in turn connected to other, greater circles. Our tradition is connected to the other traditions of this earth, which is connected to the circles of the suns and stars, galaxies and planets. The enso also signifies the beauty in imperfection, wabi. Recently we realized that it could also be a poignant reminder of what a living tradition looks like: a circle with an opening. This suggests that we are bounded enough to have an identity and know who we are, but still have an open gate for new gifts to enter through. A tradition lives not in books or scriptures, but in its living members. The old wisdom is embodied there, flowing through the masters and students alike. All masters are also excellent students, and if any of the great teachers was resurrected now the first thing that they would do is not start teaching, but rather start learning! They would have a lot to learn about our world, language and culture, as well as our wisdom, before they could start sharing again.

We are this tradition. We are creating it as much or more as it is creating us. Which directions will we go from here? How will our center in Taiwan develop and to which purposes? The ancient wisdom we have accumulated definitely has sent some guides to sit on our council as we decide these and other matters, and their voice is heard, but we also have our own seats and our own voices in the discussion, and the old ones are willing to heed our advice. Our faith and wisdom helps guide this community. Our participation is not just in service of spreading the old wisdom, but of facilitating and incorporating the new. All of us are the blood and bones of this tradition, as the old ones are perhaps its spirit. Together we can achieve amazing things, creating and maintaining a healthy tribe to which many starving souls will gather...