It's no wonder that Yunnan is the birthplace of all tea. It is a magical land, vibrant in flora, animal wonder and distinctive culture. In the tea world, people often speak about the role of "terroir" in tea. Ordinarily this word is used for wine, though it could be effectively applied to any agricultural product, especially tea. It is difficult to translate, as it is a rich word, which further justifies learning it and utilizing it in your vocabulary if you want to explore the tea world. Terroir means soil and climate - all the weather, sun, rain and moonshine, as well as the biodiversity around the tea. It also refers to the kind of soil, and the organisms that live with/in that environment. Beyond that, terroir also accounts for the human relationship to tea, the cultural context in which the tea is grown as well as the perspective of any particular farmer. As you can see, "terroir" paints bold strokes. You could think of it as the environment and/ or context in which a tea is produced. And no tea-growing region on earth has a longer history or richer terroir than Yunnan.

There is more biodiversity in Yunnan than anywhere else in China, and more than most places on earth. In fact, 25% of all species in China live in Southern Yunnan, which is tiny compared to the vastness of China itself. The soil there is rich and loamy, and even plants found elsewhere are bigger here. The British ethnobotanists that first came here thought it was the fabled "Shangri-La", amazed at the lush verdure. The waters here cascade down from the top of the world, as Yunnan is a series of stepped plateaus that march up to the great Tibetan Plateau in the west. Ancient, mineral-rich glacial waters encourage the vibrancy of this magical place. In Daoist geomancy, called "wind water (feng shui)", there are "dragon veins" that connect Heaven to Earth, and Yunnan is said to have more than anywhere on earth. Rich mountain soil, constantly shifting biodiversity and the moist climate of mists and rains that roll through the valleys make this the perfect place to farm tea.

The terroir of Yunnan also includes the rich cultural heritage here. Where there is such tremendous vibrancy - and has been since the last ice age carved these valleys - people were of course attracted by the easy life and abundance here. Yunnan has always been a meeting place of many people: Sino-Tibetans who migrated here from the Himalayas, Han Chinese as well as the hundreds of aboriginal tribes who migrated here from Southeast Asia. These are some of the oldest cultures on earth, with shamanistic traditions dating back to the dawn of man. It is likely that these tribal peoples are related to the same who crossed the Bering Strait and began Native America. They are deep and earthy people, with a strong connection to the mountain spirits and Nature. It was their ancestors who first gathered tea from the forest, using it to commune with Spirit, themselves and each other. We should follow in their footsteps.

Every variety of tea on earth is found in Yunnan, even the ones that evolved elsewhere. They have been brought by modern farmers to grow there, and most all of them are happy. Still, it is the indigenous, wild, old trees that make the best Yunnanese teas. Remember, there are two general kinds of tea trees (every tea tree is a unique being, so categorizing them is like categorizing people: useful but also dangerous). Big leaf tea trees have a single trunk, and roots that grow down, while small leaf tea trees have many trunks, are bush-like and their roots grow slightly outward. The big leaf variety is older, while small leaf tea evolved later as tea traveled to colder climates, both naturally and carried by man. Traditional Yunnan tea is big leaf, and made from old trees grown in gardens that we call "Living Tea". These old trees have deep and complex root systems, connecting them to that Himalayan water, vibrant mountain spirit and Heavenly dragon veins. The ancient tribal cultures, which still subsist primarily from the land, add human strength and power to the terroir of a fine Yunnanese tea. 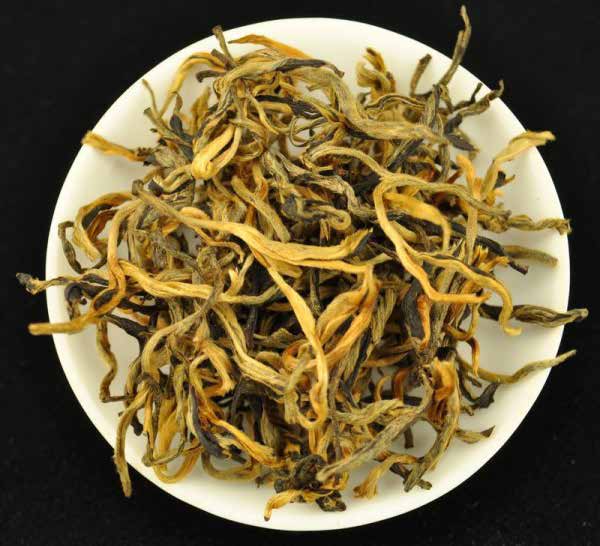 For the New Year, we wanted to send you a festive tea. This Red Tea is colorful, bright and spicysweet - everything the holiday season should be. It is also warming and energizing, since most of us are retreating from colder and colder weather each month. Picked during the autumn harvest of the year, this Wu Liang Mountain tippy Red Tea is mostly hairy, golden buds - a characteristic of Yunnanese Red Tea.

Wu Liang is the highest peak in Yunnan, and the old trees there have a unique quality amongst tea trees in Yunnan. Most trees there are grown in deep, old forests and have a greater affinity with the loamy earth than they do with the rocky, craggy mountains and the sky, such as high-mountain Oolong in Taiwan. Wu Liang reaches a peak well over 3000 meters, so many of the teas from there bring together the age and power of old-growth Puerh with the sky and rocks (like our Light Meets Life Wu Liang cake). This month's tea is somewhere in the middle, growing at around 1800 meters, which is still considered high-altitude for Yunnanese tea. It comes from old, semi-wild trees, which were propagated by humans but live in natural, biodiverse environs. Most of the trees are around 200 to 300 years old, bringing a deep vibrancy to this month's tea.

Red Tea from Yunnan is often called "Dian Hong". "Dian" is an aboriginal word for Yunnan, so this just means, "Yunnan Red". As we have often discussed, "Red Tea" is what is often mistakenly called "Black Tea" in the West. Ordinarily, a name doesn't matter so much and we wouldn't even take the time to correct this age-old mistake, and most vendors don't. But in this case there is an important issue that a Chajin (tea person) will face if this mistake isn't corrected: there is another genre of tea in China called "Black Tea". So if you call Red Tea "Black", then what do you call Black Tea? The problem began because early trade between Chinese and Europeans was limited to the ports, and most merchants sailors didn't see the tea trees, farms or processing and learned what they knew through broken Pidgin English on the docks, often from Chinese merchants who didn't care to correct them. Actually, Europeans used to call Oolong tea "Black Tea" as well, probably because it has the word "black" in the name ("Oolong" means "Black Dragon"). Our tea is very much a Red Tea.

Red Tea is fully oxidized. It is picked and withered for a long time, sometimes with machines that blow hot air into large piles of tea. Our tea this month isn't withered with such machines, but rather naturally withered spread out on bamboo mats for 24 hours. The tea is then rolled for up to 90 minutes, further oxidizing it and breaking down the cells to release more fragrance and essence. It is rolled, in fact, until it turns paste-like. After that, the tea is roasted dry. Making Red Tea is a simple process, and even though Yunnan is more famous nowadays for Puerh Tea, it has always been a region of Red Tea as well, producing as much or more Red Tea as other regions for some decades. In fact, Puerh's rise to fame is rather recent, and in Yunnan there was more Red Tea by volume fifteen years ago. But our Red Tea isn't a plantation tea, instead grown high up dirt roads in the heart of the mountains.

When old-growth Yunnanese tea buds are completely oxidized they turn a beautiful golden color that is characteristic of Dian Hong tea. The more buds in a tea, the sweeter it will be, and in market it will be considered higher quality - fetching a higher price for the farmer. When a Red Tea has more buds, it is said to be "tippy". Our tea this month is the most tippy available from this farmer - his best tea! While it is possible to find Dian Hong that is all golden tips, like the one we sent out in February of this year, we find that a blend of some of the more mature leaves adds more Qi to a tea. 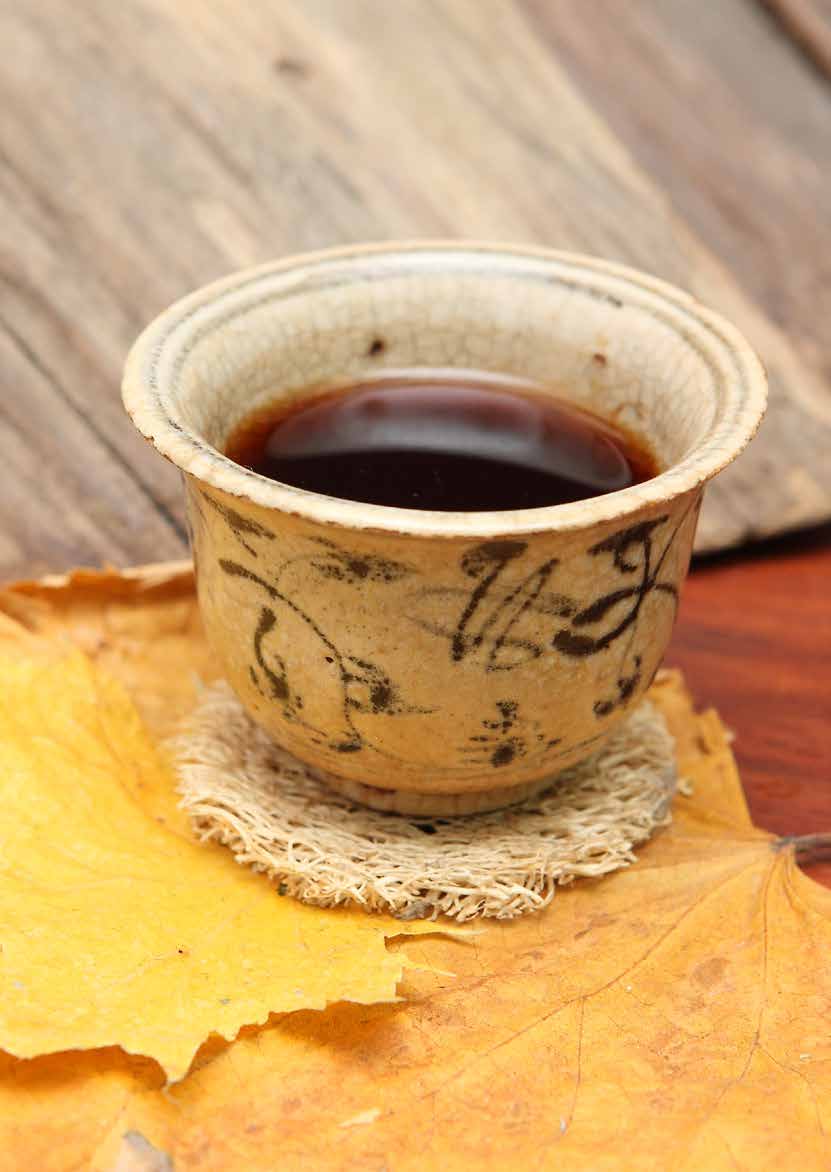 This tea brews up a lovely, sweet liquor with a floral and honey aroma. The taste is sweet and thick. It's hard to over-brew, and won't go sour, astringent or bitter easily. It has a spicy, entrancing flavor that lends itself to the holidays surrounding the New Year. Also, the Qi is vibrant, pulsing Yin with a graceful note that leaves one awake and giddy, making this the perfect tea to share with some friends, along with some laughs.

As we mentioned in previous months, we recommend letting the tea get over its jet lag. Let it sit a week or two and become acclimatized. Now you can do that with your brand new tin!!!