You encounter the tea spirit in so many places. You often meet the most kind and giving friends, tea brothers and sisters, and in places you least expect to. This month we attended a tea expo in Taichung, as you'll read about in a bit, and sat down to try some Black Teas with Mr. Lin Yi San, whose friendly smiles and array of teas seemed inviting. We enjoyed the Liu Bao he served us and told him so. When we mentioned Global Tea Hut, he immediately offered to donate this month's tea. His generous heart and warm smile reminded us why we love tea so much, and why we are all here in this Hut sharing tea with each other, despite the distance that separates us.

Before we start discussing Liu Bao, we must once again drive home the difference between Red Tea and Black Tea. What is called "Black Tea" in the West is actually Red Tea (hong cha). Red Tea is oxidized completely during production, whereas Black Tea is characterized by post-production artificial fermentation. Ordinarily, the mistake wouldn't be worth correcting, as it doesn't really matter what we call something. However, in this case calling Red Tea "Black Tea" is confusing because there is another genre of tea called "Black Tea" in Chinese. So if you call Red Tea "Black Tea" then what do you call Black Tea? The mistake began when Europeans first started trading with China and weren't allowed very far beyond the docks, learning most of what they knew about tea in broken Pidgin English from the dockside merchants. In those days, they also called Oolong "Black Tea".

Liu Bao is a real Black Tea produced in Cangwu, Guangxi. The name "Liu Bao" literally translates to "Six Castles", which may refer to forts that existed in the area at some time in the distant past. The local mountains are full of canyons, streams and waterfalls that are misty year-round. The loose, fertile soil, humidity and proper sunshine make it an excellent region for growing tea. The tea trees here are Big Leaf, which we have discussed extensively in past issues. To briefly summarize: the first tea trees are all what has become known as Camellia sinensis var. Assamica. They can grow bigger leaves, and generally have a single trunk with roots that grow more downward. As tea moved northward, naturally or carried by people, it evolved into a Small Leaf varietal, known as Camellia sinensis var. Sinensis. These trees can't grow as large of leaves, are more bush-like with many trunks and roots that grow more outwards. Like Puerh, Liu Bao is Big Leaf, and the best quality Liu Baos are made from older tea trees as well.

Liu Bao tea is processed similar to Shou Puerh. In fact, when Puerh manufacturers were developing the process of artificial fermentation used to create Shou Puerh in the 1960's and early 70's (officially licensed production began in 1973) they studied Liu Bao production, amongst other kinds of Black Tea. Ultimately, Shou Puerh production methodology is based on such teas, and owes its existence to them.

There are some variations in Liu Bao production, like all tea, so formulas can be a bit misleading, as they ignore the adaptations farmers make to suit the weather - different amounts of rainfall lead to different schedules and moisture content in the leaves, for example. Also, different factories/farmers have different recipes, even internally at different times or for variety. Liu Bao is traditionally harvested in bud sets of one bud and two leaves, though in modern times more leaves are sometimes picked to increase yield - a problematic trend in many tea-growing areas. The tea is then withered indoors and/or outdoors to oxidize and remove moisture, which is necessary with most teas. The tea is then fired in a wok, called "kill green (sa qing)", to arrest oxidation and remove certain green enzymes that make tea bitter. Like Puerh, this is often done at a slightly lower temperature than other teas, to keep some of the enzymes that help in fermentation. The tea is then rolled, oxidized and rolled again. At that point most Liu Bao tea is fermented in moist piles, similar to Shou Puerh. This heaping is called "wo dui". After fermentation, the leaves are dried, traditionally in the sun.

After fermentation and sorting, the leaves are steamed to re-moisten them and then pressed into large, bamboo baskets. The tea is packed down into these wicker baskets, pressed in tightly around the edges and more loosely in the middle to facilitate the next phase of air-drying. The drying takes a few months, after which the tea is often aged.

In previous times, Liu Bao was only sold in large baskets weighing 40 to 50 Chinese jin (1 jin = 600 grams). These large bundles were sometimes wrapped in huge bags for transportation, called "gunnies (Bao Lan 宝篮)" by Malaysian Chinese who spoke fluent English. In more recent times, Liu Bao has often been re-packaged after aging into smaller one-kilogram baskets, or into other amounts in boxes, bags, or even compressed into other shapes to hitch a ride on the bandwagon of Puerh, as its neighbor has soared to great popularity and wealth. 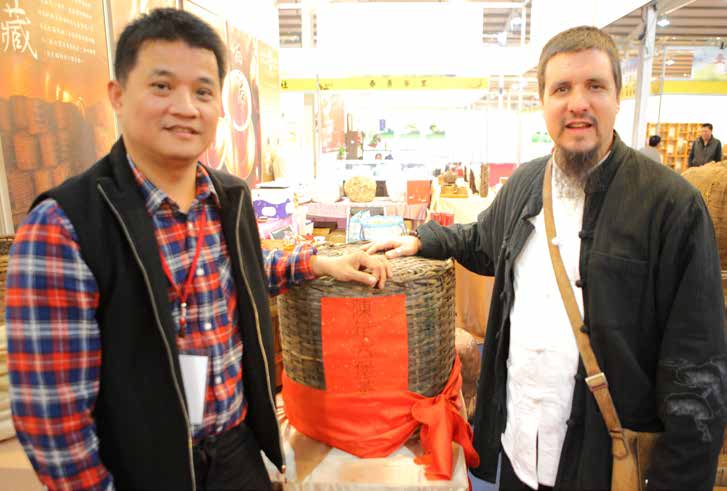 Traditionally, Liu Bao tea was exported to Cantonese tea drinkers in Malaysia and Hong Kong. In Malaysia, it was often served to tin/pewter miners during their breaks. In mainstream Chinese culture in Malaysia, senior citizens refer to it simply as "Big Leaf (Da Ye)". It always had a reputation for being cheaper tea, often boiled, dried and re-boiled in restaurants. A lot of famous old Liu Bao teas have survived in Malaysia - mostly left over from the large stocks that the mines had when they closed. Some of the most famous, most coveted vintages of Liu Bao Tea are:

It used to be that Liu Bao was a cheap alternative to aged Puerh, often providing the same warming, deep and fragrant brews that settle the soul and aid in digestion. However, nowadays the more famous vintages of Liu Bao are equally expensive. Aged Liu Bao is said to offer a bright red cup with mellow, thick liquor that tastes of betel nut. It is often regarded as the highest quality when covered with the spores of a certain yellow mold, which you will read about later on in this issue. In traditional Chinese medicine it is cooling, refreshing and good for dispelling dampness as well as detoxification.

Our tea of the month is a 2000 Liu Bao that was also produced by the famous Guangxi Wuzhou Tea Factory. It was aged by Mr. Lin in Tainan. It is deep, dark and mellow and settles the soul. Liu Bao is one of our favorite teas, combining the power of Big Leaf, old-growth trees with the processing of man, the fermentation of Nature and the work of all the microorganisms that change the tea so magically over time. The Qi is deep and Yin, moving towards the center, carrying you inward as you drink. Try brewing this tea gongfu if you can, or at least in a quiet space with some people you love. You'll find this deep, clarifying brew centers everyone and allows for a deeper connection to each other and the moment. We are grateful to Mr. Lin for his generous heart, and so grateful to share this amazing tea with this growing community!