Last month, we discussed the topic of gaiwans as they relate to gongfu tea. We offered two different experiments to help us experientially understand the effect of material and shape as they relate to gaiwans. Offered here are the notes and results of two gongfu students comparing the material of a gaiwan to that of an Yixing teapot. These results aren't meant to be the last word on anything. You should all try this experiment yourself, and if you like tea a gaiwan produces, then continue using one with relish and joy! 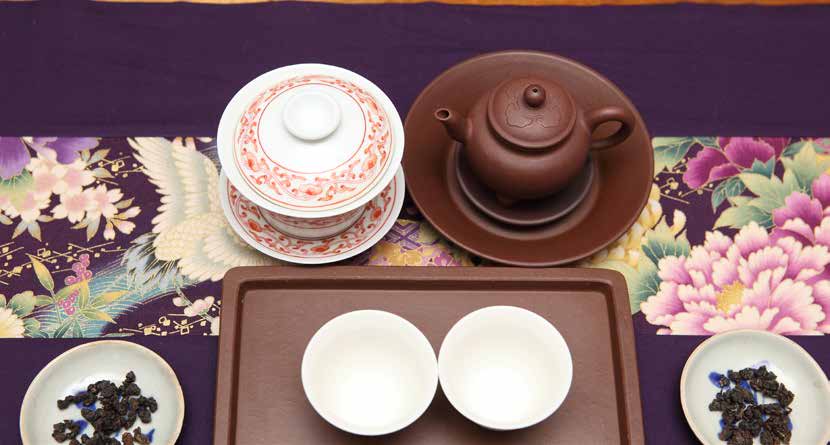 As mentioned in February's gongfu experiment, just do your best to gather the materials available to you. First and foremost is your participation in these experiments, for without that, you will always be drinking tea through your head. Don't be afraid to make mistakes and grow experientially, and don't make a serious fuss over them either. The impetus to carry out these experiments should come from a desire to enjoy yourself, and then to share that enjoyment with all those whose path you cross.

This experiment is more complex than the last as you will be using two brewing vessels at the same time. I would not recommend pouring the gaiwan and the teapot with two hands simultaneously for the safety of the teaware. You should instead pour sequentially, one after the other, taking into account the steeping times and the time it takes to pour each individual brewing vessel. To create equal steeping times, you will need to pour water into the first brewing vessel and then wait approximately the amount of time it would take to decant from that vessel before pouring water into the next one. Then you can simply pour the tea from the first vessel into the cups followed immediately by the second vessel to approximate equal brewing parameters. It also helps to switch the pouring order each steeping to get a feel for both.

For this experiment, we will be looking for any differences that exist between the tea brewed in the two brewing vessels. That includes aroma and flavor, and all of the usual mouthfeel-suspects: temperature, smoothness, viscosity, movement, splash to the upper palate, ease of swallow, production of saliva and hui gan (minty fresh sensation returning on the breath).

It's usually a good idea to perform these experiments with some degree of quietude, saving your discussion for the end. This calms the mind, increases your awareness and keeps participants from influencing each other's perceptions. I will share my observations for the experiment.

Also, the Tea Wayfarer this month, Ivan, joined me for this experiment. These are his notes as well. Cheers Ivan!

It was clear from the beginning that the purple-sand clay from the Yixing teapot outperformed the gaiwan on all accounts. The tea was smoother and silkier, rounded and penetrating; it splashed to the upper palate, coated the mouth uniformly and moved towards the back of the throat with an easy swallow. Temperature was better preserved and the tea had a sense of balance, was grounded and more patient. (When a tea offers more steepings it is said to be "patient".)

The gaiwan, on the other hand, was simply less adequate for brewing this tea. There was an obvious difference in all sensations in the mouth and the tea had a sense of sharpness, airiness and imbalance - all comparatively speaking.

One important thing to note about the gaiwan is its "peak and trough" effect. Where the purple-sand clay brings all elements into harmony and balance, the porcelain (and design) of the gaiwan tends to fracture and pronounce certain qualities of a tea while dampening others. This is important to understand because, otherwise, it can catch the unaware tea-drinker off guard. Often times, a gaiwan may highlight the aroma or flavor of a tea in the first infusion or two, giving you the impression that the tea actually tastes or smells better from the gaiwan. From a merchant's point of view, that might be just what he or she wants in order to sell a product to a consumer. However, if we are going to turn our quality switch on and consider fine tea in a larger context, even the less experienced tea-drinker can appreciate the balancing, smoothing and grounding effect of Yixing purple-sand clay.

In a crude but simple visual, you can consider the se two figures to the right. Figure 1 suggests the balancing effect of purple-sand clay, while Figure 2 reveals the fracturing "peak and trough" effect of the porcelain gaiwan.

These figures do not account for time. While the highlighted qualities from the gaiwan might be sensually pleasing in the beginning, the differences in quality became more and more pronounced as time went on. The peaks dissipated and the troughs were never really experienced. Meanwhile the tea from the Yixing teapot progressed uniformly, infusion after infusion, slowly and subtly releasing its qualities in a balanced manner. Though an impatient tea is not necessarily a bad thing (some teas simply release their essence faster), the issue here is that a tea which had the potential to be patient was compromised by the brewing vessel.

One mechanical note to mention is that pouring from the gaiwan into small cups is actually quite difficult because of the design of the brewing vessel. It's very difficult to pour smoothly into each cup and, moreover, to obtain an even infusion as a result. The awkward and ungraceful pour from the gaiwan into the cups could be factored into the peaks and troughs of Figure 2, but the details of that can be saved for another experiment altogether on pouring and shape. Of course, some of that discomfort could also be mitigated with practice.

In summary, it is obvious which brewing vessel is more appropriate for brewing fine tea. Our conclusions were suggested before the experiment even began, not because we made any assumptions, but because historically, gaiwans were intended to be directly drunk from, not as brewing vessels to decant tea into a pitcher or cups, which is a much more recent trend. One point of this experiment was actually to dispel the assumption, no matter how obvious, so that we may instead speak from a place of experience and more fully understand why it is we do what we do. Now, not only can we articulate why a purple-sand clay teapot is more appropriate than a porcelain gaiwan, we can demonstrate it. The proof is in the cup!