According to most versions of the story, the Shogun Ashikaga Yohimasa (1436-1490) was given a Song Dynasty celadon bowl for tea which became his most prized possession. Through use, the bowl developed a crack, so the shogun sent it back to China to be replaced. Apparently, the Ming potters returned the bowl with a metal clamp fixed over the crack, apologizing that no one alive at the time could replace the bowl. This story, and others like it, would affect potters up until the modern day: it became gospel that even the official kilns of the Ming Dynasty could no longer reproduce celadon masterpieces, called "qing ci" in Chinese. The art of Song Guan would remain a thing for museums over the course of the next few centuries. Only in the modern era would potters of China, Taiwan and Japan begin to confront the challenge of celadon once again.

What is qing ci? This special kind of glazing was invented and mastered during the Song Dynasty (9601126 AD). The clay and glaze both have minute amounts of iron in them that reduces during the firing process. The work then develops blue, bluish-green or even jadegreen colors. However, it is the sky-blue celadon pieces that have always captured the admiration of collectors and potters alike. Sometimes the glaze is intentionally crackled and cracked. These cracks sometimes ask the tea drinker to only use them for one kind of tea, but the cracks will eventually stain brown and give the piece an antique ambience. The high firing temperature and temperamental nature of the clay and glaze make this form of pottery very difficult and time consuming to create. Potters regularly lose pieces to flaws. The iron will often react and come to the surface, causing a blemish that will send the piece to the scrap pile. Sometimes potters will add powdered iron to cover the surface with these dots, but should one or two occur accidentally in the blue pieces, the piece must be abandoned.

Traditionally, the best Song Guan pieces used dark brown clay with traces of iron in it. When fired they will have the "brown rim and iron foot", as it was referred to in ancient times. Because of the iron, the clay fires a deeppurplish kind of dark brown. This is seen in the foot. As the layers of glaze roll down the cup or bowl, the translucent rim also takes on a purplish-brown hue. Many of the potters in Taiwan and elsewhere have started using ironfree red clay. The bottom of these pieces will be red and the rim a golden brown. Though not as beautiful, these pieces are far less sensitive and can therefore be produced in larger quantities and in less time.

We have found that this kind of celadon teaware, especially the cups, is most useful for drinking puerh teas, and especially young sheng puerh. The obvious reason that this kind of celadon is good for puerh is that the glaze is one of the thickest in all kinds of pottery. The soft, thick glaze keeps temperature in, which is important for Puerh, and adds a nice cottony texture to the liquor as it enters the mouth, softening an otherwise bitter/astringent tea.

Celadon has always been a refined ceramic, attracting the attention of royalty and connoisseurs for centuries. Holding a beautiful cup or teapot is more than pleasing to the eyes. The colors change in the light from jade to sky blue, to a cyan of the deepest, clearest ocean. Beyond that, the cups are so soft and smooth, and don't really feel like ceramic at all. The liquor, then, is smooth and softer when sipped, and the taste clear. There is nothing more one could desire from teaware than to enhance the beauty, taste and ambience of a tea session. Traditional celadon teaware has the power to inspire a session, and lend it an ambience of refinement. 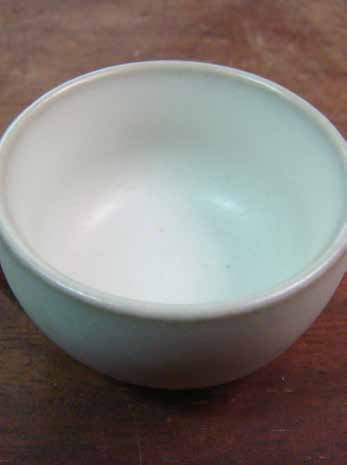