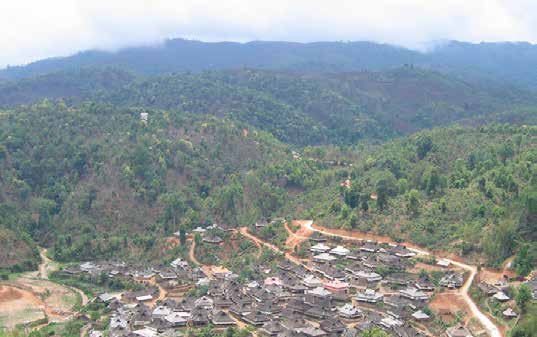 Every puerh lover needs to know a bit about the rich geography of Yunnan itself. In this article, we get a brief sketch of Yunnan's diverse tea landscape.

If you love puerh as much as we do, it helps to get to know Yunnan a bit. In previous issues, we've discussed the term "terroir" and its significance in relation to tea. "Terroir" is a French word that is generally used in discussions of wine, but it is so applicable to tea as well that most tea lovers have adopted it into their discussions of the Leaf. Terroir denotes the special characteristics of a place, found in its geology, geography, climate and even cultural heritage, which interact with a cultivated plant species to create unique expressions. Terroir is the soil and weather of a particular region, the geography and culture of the people and their relationship to the plant, and even the microorganisms and their interaction with the plants. Every place has a unique soil composition, pH, minerals and climate - all of which create a distinctive tea. When we talk about a tea's terroir, we are speaking to the unique environment that created it, one that couldn't be reproduced. Even if you took a grafting of a tree and cloned it elsewhere, it wouldn't be the same since the sun would be weaker or stronger, the soil composition different, etc., etc. It follows, then, that every region in Yunnan produces a very distinct puerh tea, with unique flavors, aroma and Qi.

The vibrations of an environment are the organism itself, and the organism is the environment. There is great wisdom in understanding that living things "go with" their environment, as Alan Watts used to say. Any change in the environment is a change in the organism - physically, and more subtly, on the vibrational level as well. When you watch a documentary on "Rivers", it isn't just an hour of water flowing by; it also contains the fish, frogs and crayfish. Each of these affects the water chemistry of the river, the levels of its banks, etc. And the river in turn affects their lives. They are the river, in other words. Similarly, tea trees are their environments, which is why it is so important that we promote living and/or organic teas!

As a result of tea trees being their environment, one of the first steps on your puerh journey will be getting to know some of the key regions of Yunnan, the birthplace of all tea, as well as the flavors and vibrations of the teas that come from those places.

Nowadays, puerh tea is mostly produced in three areas:  Xishuangbanna, Puerh (which was called "Simao" for a long time) and Lincang. Historically, the most famous of these was  Xishuangbanna, which literally means "Twelve Rice Paddy District".  During the early eras of Puerh, almost all commercial tea came from this region. It is in the very south of Yunnan. There were traditionally "Six Famous Mountains" in Xishuangbanna, all located in a cluster to the northeast of the Lancang river (Don't get confused - "Lincang" is a province and "Lancang" is a river). The names below are Yunnanese aboriginal words. We have also included the meaning in English, Mandarin characters and pinyin as well:

There are many other popular areas producing puerh tea in Xishuangbanna. The most famous in recent years is Lao Ban Zhang (老班章), which is the most expensive of all puerh tea regions. Nannuo (南糯山), Bada  (巴达山) and Menghai (勐海山) are amongst other famous tea producing areas that are to the southwest of the river.

The "Puerh" region is home to the city where this magic tea got its name. This is also where we took our trip, covered in July's issue of Global Tea Hut. Qian Jia Zhai is in Puerh, which means many of you will be drinking tea from there soon. Puerh is in the southwest of Yunnan, just north of Xishuangbanna.

The Lincang region is the northernmost of the three major tea areas in Yunnan. It is also the birthplace of all tea. The forests there have the oldest trees, and deepest roots in Cha Dao. There is some disagreement amongst scholars as to the origin of tea, but in traveling to the three major areas of Yunnan, we have found that the Lincang region is the home of all tea. We especially feel this in the "Five Mountains". Our understanding, however, is based more on a feeling, a connection and affinity to Tea and Her spirit than on any linear proof - take it or leave it... The five mountains all tea originated from are:

There are many other tea-growing regions in Lincang, like Bing Dao, where this month's tea comes from. Tea from this area has only blessed the market in modern times, though the aboriginals have been drinking this tea for millennia. The tea here is strong and deep, with sun, moon, mountain and air pouring through it.

Recently, teas from other regions in Yunnan have also started to become available, following the great popularity of puerh tea in China. De Hong is one other region in the very west of Yunnan. Our beloved purple varietal red tea, which we have recently named, "Plum Blossom Trail" comes from De Hong.

While it is nice to learn some of the names associated with the tea we love, more information alone doesn't really improve your affinity with tea or your ability to appreciate it. It is much better to travel to Yunnan and meet the geography in person - or, if that's not possible, travel the regions by drinking your way through them. In this way, your knowledge of puerh will be experiential! We hope to provide more chances for you to do that. Of course, not all of our teas will be puerhs, or even come from Yunnan, but we will definitely be sending more of this magical tea - and from different regions of Yunnan - in the coming months and years...