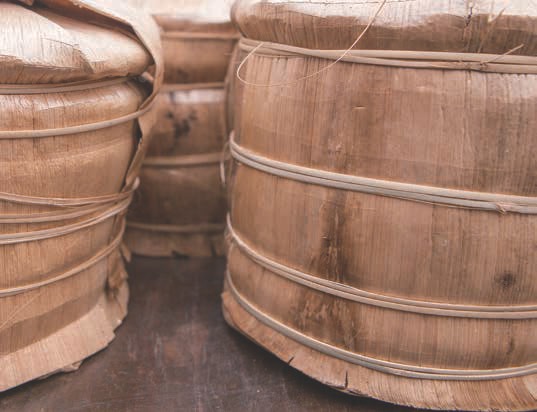 We love nothing more than a good tea story! In a humorous session with an old hermit, we learn why puerh cakes are always stacked in bundles of seven, and why they've been called "Seven Sons Puerh" for so long. Stories like this add to what makes tea so great!

Puerh cakes from 1972 to 1997 are all called "Qi Zi Bing", which literally means "Seven Sons Cake". Puerh teas have always been packed in bamboo-wrapped bundles, called "tongs", each with seven cakes inside. This tradition of packing seven cakes together caught on in the Seven Sons Era, and later scholars have since started calling the period by that name. But why seven cakes?

One funny old man seems to know the story of why puerh always comes in seven cakes and why it's called "Seven Sons". Let's go visit him for some tea, shall we...

The old man pours the thick black brew into worn old porcelain cups. The steam rises in swirls from the amazing liquor. In its shadows, you can see black and brown swirling towards red and a golden tinge that rings the outside of the liquor. The tea starts blurring the corners of the world - everything grows softer and more pliable, while at the same time clear and bright. The old man grins toothlessly, suggesting a looseness in his bearing, as if some of his mind isn't here, but rather drifting out the window with the dust particles and tea steam... "Seven Sons, eh..." he mumbles, starting his story:

"They say that long ago in the distant village of Feng Yang," he begins waving into the distance, "there was an old couple that really, really wanted a daughter, so they ended up with eight children... Now why anybody would have eight children," he mumbles more to himself than us, taking a sip of the dark brew... "Now, what were their names..." He pulls at his beard, and then picks up his cup to take a drink. Looking into the brew, he suddenly remembers! "Oh yes. Ai Lao was the first. Then Bu Lang, Ji Nou, Ah Wa..." He sips loudly, "As you can see, this couple was strange, indeed... The fifth son they named Ai Ni, which means 'Love a Daughter'. Apparently, they kept trying because they wanted a girl..." He giggles - a cute, yet toothless sound that is so filled with mirth that we're all soon laughing. "The next one was La Gu, which means he would 'Pull in a Daughter'. The seventh was named Wu Liang. That means 'Too Many Damned Sons'!" He guffaws, rolling around and patting his belly. "Anyway, they finally had a daughter - the eighth child - and named her 'Ha Ni' or 'Finally!'." Hahaha! 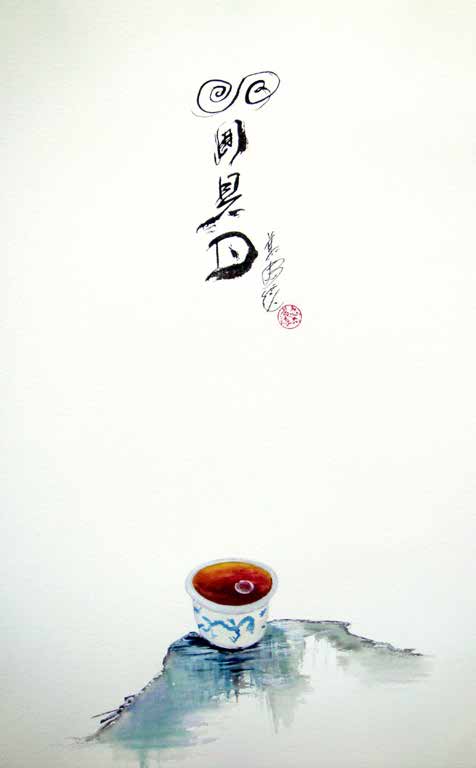 "Now this family was a bunch of tea farmers, puerh in fact, so having the extra hands around the house was alright, since it meant less to do for the old rascal that sired them all, eh!" he says smiling mischievously. "They didn't earn much, but they raised their children well.

"When they were of marriageable age, the old soot gathered them all together to talk about their futures. Like most Chinese puerh farmers, the father wanted his sons to follow in his footsteps and farm tea. It turns out that this particular farmer wasn't as stupid as this story makes him out to be: he actually loved tea, and thought the world of it. He knew it had good juju..." The old man smiles and the tea gleams so brightly in his eyes. "As they talked on, the old man knew that his small farm would not be enough to support so many children, especially if they all got busy making as many kids as he had!" As the tea session continues, the tea and the funny, toothless old man both start to get funnier and you too roll around a bit, laughing with glee. "They went to bed without a resolution. Over the coming days, the poor old man was so distraught and worried about his children that he fainted, and fell into an illness... Maybe he wasn't so smart, after all..."

"All his seven sons were sad. Their father had fallen ill worrying about them. They therefore ventured off in seven directions to find some medicine for Old Ba... Now, this is my favorite part," the old man says, pouring out another pot into the stained old cups. "The seventh son, Wu Liang, came to a distant mountain where it was told that there was a magical elixir that could cure anything. He hiked up an old, worn trail and found an ancient and mystical tea tree with thousands of years of canopy rising up into the sky. He prayed at the altar there and plucked a few of the leaves, rushing home... I bet you know what happened, eh?" He looks down at your recently-filled cup and giggles. "You got it, the tea revived the old coot!" He laughs.

"The tea also showed that old dodger a vision... and he had an idea. He summoned his seven sons and told them all to travel to distant, remote tea mountains and bring back the amazing old tea leaves that grew there. The sons obediently started doing this and brought the leaves back home to be processed. Over time, they had to travel further and further afield, but they did earn enough to start families of their own... Hopefully, not as big as their old man's, though!"

"The daughter stayed with the old couple, as she rightly should since that old mom went through so many births to bring her into the world!" The old man slaps his knee, taking another sip. The liquor is starting to turn from deep black and brown to amber and red. "The father renamed her 'Nu Er Cha', which means 'Daughter Tea'. Those sons all settled down in the mountains that are to this day named after them, though they always sent tea home and came to visit now and again like good brats..." Funny old guy!

"Each year, they would also bring a cake of their best tea, from the oldest and wisest trees to gift to their father. He would drink that tea himself, aging what he couldn't use in bamboo bark. The aged tea helped him live a long and healthy life, and he never swooned into a coma again - especially now that his house was finally quiet!"

"And over the many long years he lived, he also shared that tea with all the other villagers, and the many guests that come to disturb such toothless old men," he winks playfully. "Some even came from far away. And to all of them he would proudly hold up a bamboo bundle of seven cakes and proclaim, 'This is my Seven Sons Tea!'"

The old man pours a last brew from the wizened pot, as we look around at all the bamboo tongs on the shelves, each with seven cakes inside...