Out of Bounds Tea

Out of Bounds Tea 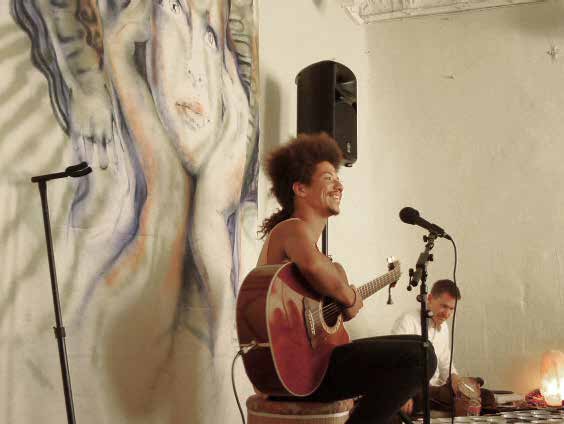 Steve's chatty and entertaining writing style pulls us in. He always writes like a friend, and we feel like we're sharing tea. Here he tells us about two tea gatherings he served at recently. Each one had its share of challenges, but ended in insight, joy and a deeper understanding of Tea and himself. After reading, we might feel the same!

As we have all seen, tea is appropriate in all sorts of situations and spaces. As we get more practiced in serving tea, the comfort level and desire required to bring tea into different environments also increases. We love the traditional meditative approach in which we serve tea and see its immediate effect on people, yet recently we have also been shaking it up a bit, trying out different teas, different spaces and incorporating different elements - to sometimes delirious effects! Recently, there have been a few less-than-classical settings in which to enjoy tea, and I thought I'd share two of them with you:

When an opportunity came up to serve tea recently at a concert given by Dustin Thomas, there was an instant "yes" that bubbled up from the tummy region. The brain then stepped in with its worries about the logistics involved in preparing tea for 40 to 50 people, as well as murmurings about how "appropriate" a "tea ceremony" during a concert might be. Just the left-brain doing its usual, tedious thing: finding fault and looking for something to worry about! Luckily, they were gently placed aside and the right brain enjoyed a little triumph. And the evening turned out to be one of the most free-flowing and joyful tea experiences of my life!

Thomas has for years been the bass player and a powerful contributing force to Medicine For The People, the now-massive spiritual-folk band led by Nahko, who calls Thomas "a light, teacher, warrior and deep brother." "Little Buffalo", as he was dubbed by the band, has toured with MFTP extensively throughout their frenetic rise to fame. Calling them a band almost misses the point; they are more of a movement, spiritual and activist. In their lyrics and interactive live sets, they propone a higher, more exalted way of living and being, a reconnection with Mother Earth and a realization of how precious this life we live is. Most people know them thanks to the hard-to-believegorgeous video to their song Aloha Ke Akua, and anyone who has spent time at Tea Sage Hut likely knows Budding Trees as a background soundtrack to Wu De's cooking/dancing-cooking.

Though the group has received a lot of attention centering on Nahko, Little Buffalo is a powerful force of light in his own right, and has recently been touring the world, playing sets over-flowing with love, from Australia to Moscow, and most recently in Tallinn and Helsinki. Tom and Jane, a couple who have done so much to awaken the same kind of life-affirming energy in Tallinn with their singing evenings, met him in Bali and on a whim asked/told him to come to Estonia during an already-planned European tour. Promised a land of "berries and fairies", it didn't take Dustin long to agree.

Indeed, his Estonian introduction was mind-boggling. On the day he arrived, he was taxied from the airport to one of the planet's largest outdoor concerts; the Estonian National Song Festival, held just once every five years in the spirit of reconnecting to tradition, roots and nature via song. Suddenly he was among over 100,000 people gathered peacefully to sing. His head was still spinning as he was brought the next day to an isolated bog, a favorite Estonian hangout to have tea there. "I was like, 'Where am I? What is this place I had never even heard of a few weeks before?'" 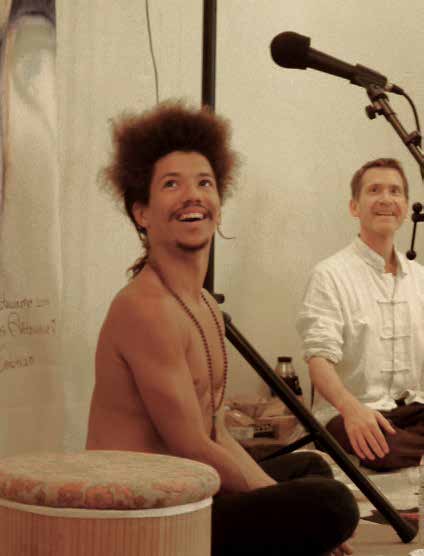 Dustin is all hair, all smiles and all heart. His has an eternally young, cute face framed in a dreadafro combo that would be the envy of bushmen and yogis alike, often lit up with an ear-to-ear smile and bright, eager eyes ready to face the world with wonder.

Not sure how Dustin was to react to the already-planned idea of serving tea during his concert, I was psyched to hear how psyched he was about the idea. Turns out that Dustin is an avid tea drinker and even worked at a knowledgeable teashop in the US. He even knew about the Black Tea (hei cha) I was planning to serve. Indeed, right after the event, the first thing he did was call his old buddies back home and say, "You'll never guess! My dream has finally come true - I just combined a tea ceremony with my music!" Turns out he had long fantasized about somehow, somewhere combining tea and music, and here in little Estonia the Universe responded.

As more and more people piled into the room, somehow I didn't even worry about service questions, knowing that all would take care of itself. It did. As 63 people finally turned up, I had to ask couples to share bowls. Indeed I didn't really worry about anything that night, and while sitting at the front of a roomful of people is not my preferred scenario for evoking a calm and restful spirit within, somehow everything felt like it was progressing as slowly and sweetly as flowing honey. Time was stopping and I tried to be just an empty vessel doing what was required at the moment. At some point, only after much practice, the "me" components in any focused act (serving tea, engaging in sports or concentrated on a craft) appear to diminish into irrelevance and you are simply responding to the necessities of the moment.

Dustin had the crowd in a state of bliss with his joyful, rhythmical songs. Many are interactive, meant to be sung along to in a verse-repeat-verse method well known to Estonians, as this form evokes traditional folk songs for them. Here, to warm, lush, often rousing guitar melody lines, we were singing songs like One Way Or Another and opening our hearts with simple but touching lyrics like:

Amazing what sitting on the floor and singing along to a friendly spirit playing a guitar can feel like! What a simple gift Dustin offers: one man, a guitar, a smile and lots of heart. Armed with just that, thousands are touched.

And the tea, I must say, helped some too. I boiled up some 1990's Liu Bao, my favorite choice for anything requiring a bit of heart opening. It flowed continuously as some gorgeous, angel-helpers poured it into people's bowls. As I truthfully said at the end of the concert, I think that it was perhaps the most delicious tea I had ever brewed, as it was made with a heart fully opened by the joy and love in that room then and there, and steeped while singing along to his touching songs. Dustin, by his very openness, in the simple way of just presenting himself to others as he is, served as a powerful, living example for everyone to just shine! No matter who you are or what your specific talents are (and we all have some), don't hide them! Let them come out! The space into which you step will be steeped in love and acceptance, and your doing so will open others' hearts as well!

Truly, it was among the finest moments of my life, a powerful learning experience and an honor to serve tea in such a state of flow and bliss. So glad, too, to be in the company of friends throughout. 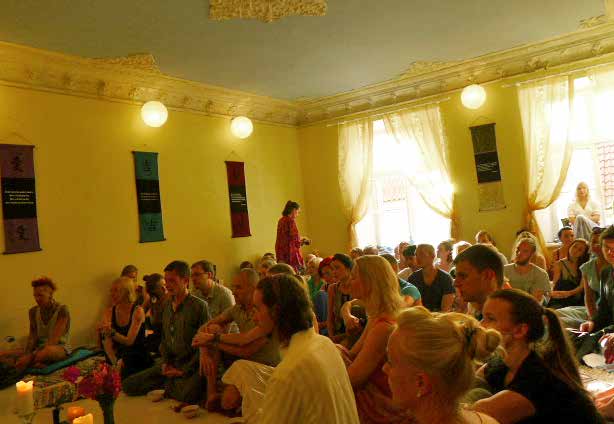 There was another recent tea event that stepped out of the boundaries of our usual experience. We dubbed this the Tantric Tea Temple, after an actual space run by Tantra teacher Shashi Solluna. We met at the recent Tantra Festival in Estonia, where she was hanging out in our Chado tea tent, and it turned out that she was so into tea that she had merged tea drinking sessions in with her tantric courses in Thailand. Her space there was called the "Tantric Tea Temple". Of course, we hit it off and after being taught a lovely Guan Yin Qi Gong ritual by a lake, we decided to set up a tea session before she left.

In attendance were three tantric instructors and some friends. Inspired by the heart-opening theme of the eve, I again chose a Liu Bao tea - this time an unopened 800g basket from the 1980's. There was quite a lot of excitement in the air that this tea had been packed over 30 years ago and had been meditating all the while, waiting for us to open it up again! Shashi started with a heart-opening meditation exercise, which centered us and provided the perfect ambience into which tea could start flowing. Recently, I have also found that a short, loosely guided meditation before a tea session helps a great deal to shed everyday concerns.

We enjoyed a few bowls of the black brew in silence and then I gently suggested that during the next bowl, we all shift our focus on 'where the tea goes' as it slips into our bodies at the back of the throat: To follow the liquid as it dissolves into us. To simply see 'where it goes'. There were a few giggles. "Well, seeing as this is a tantric tea session, there may be a few obvious destinations, but just stay focused. The tea can surprise you." What soon followed was unlike any other moment I had experienced during a tea session. Someone started laughing, at first just gently, as if the laugh had bubbled up unintentionally from deep within. Then a few more laughs, starting to sound free-flowing. Another, and then another started laughing after this, genuine just-for-its-own-sake kinds of laughs: mouth relaxed, with the sounds emerging from the middle of the chest (versus those throat laughs we often use to signal joy to others but are not very deeply felt). Soon, about five of the eleven gathered were laughing quite uncontrollably, shaking their heads, moving shoulders rhythmically and enjoying the feel of big smiles on their faces. Fantastic!

Had anyone walked in on us, they would have either thought I'd slipped something into the tea or that we were all a bit loony (or at least that we were having a group Kundalini awakening moment). I kept pouring tea; lips parted in a joyful smile, enjoying the happy, unbridled chaos around me. Delightful! One guy lay on his back and let out a whooping exclamation, placing his hands over his head in seeming disbelief.

Had the tea spoken through them? Had it helped dislodge free-flowing energy (which, in the tantric community is never too deep under the surface anyway)? Were the spirits of the tea farmers who had processed the tea in the 1980's coming back to do a little tribal dance through us? Did the spirit of the tea wish to experience this form of human joy vicariously through us? Or are tantric tea drinkers just a tad... on the sensitive side?

Either way, it was a glorious tribute to the tea plant. There was also spontaneous dancing that seemed to emerge seamlessly from the flow, and, of course, hugging. And in tantric circles when people hug there are no body parts pulled back, back-slapping nervous ticks or a sense even in a full embrace that the person is holding back due to inner fears and discomforts, as happens so often in everyday life, even among friends you'd think were comfortable with each other. These are full-frontal mega embraces - soul hugs in which the spirit seems to dislodge ever so slightly from the body and lilt upwards. The heart-opening exercises and Liu Bao had helped loosen inner tensions and everyone sensed the safety and acceptance of the space.

Tea finds its place among us all, in every kind of situation. Now it is up to us to learn from Her flexibility! 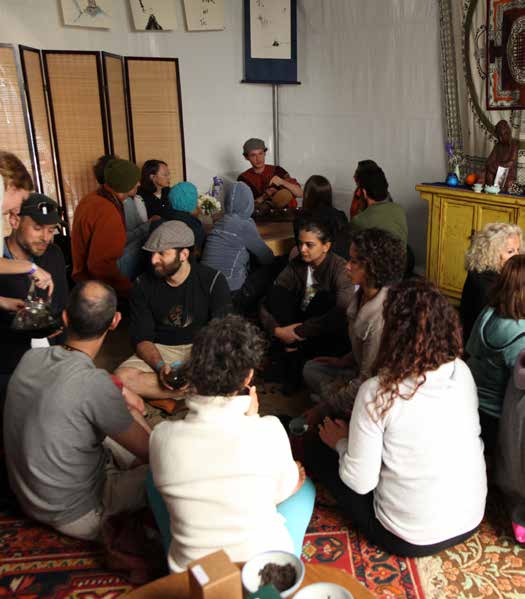