Lu Tong's famous Tea poem has been recited at Tea parties, shared amongst friends and even carved on Tea jars and pots for millenia. It resounds with a deep and timeless Tea spirit, celebrating Tea's ability to inspire us to soar. Through drinking Tea, we find our wings and raise them on a wind that blows towards the poetic heart waxing within. 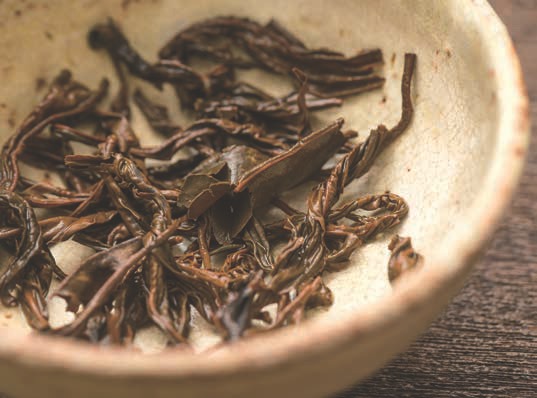 Lu Tong was a tea sage of the Tang Dynasty, born near the end of the eighth century of our era. Little is known of his life, other than that he declined an offer to be a provincial officer, preferring a quiet life of renunciation and Tea. He lived a secluded life somewhere in the mountains of Hunan Province, writing poems under the name "Master Jade Spring". His poems oh-so-elegantly wrap around the Way, capturing all the beauty and serenity found in a life of Tea. And though his life took its course without any history or much story to speak of, other than his tragic death, I often find that my affinity to him is greater than other more renowned tea masters. His poems clearly demonstrate his presence and understanding of the power Tea has to help us live more natural, complete lives. His tea poetry especially deals with the Qi of Tea in a profound way, which we can explore in this issue. The artist and poet in me is also moved by the elegance of his writing, as it stirs my soul and makes me yearn in my heart for the next trip to the tea room.

Lu Tong also studied Daoism, growing up on one of China's most sacred mountains. Though he was married and had children, he still lived a life of leisure withdrawn from the world. His poetry and lifestyle, however, attracted the attention of some officials and it would seem that the tea sage himself kept up these relations in exchange for the high-quality teas they offered him. He was even given some Imperial Tribute Tea, which was priceless and unavailable except by gift from the Dragon Throne. A government official and friend sent some to Lu Tong, inspiring his most famous poem, the Song of Tea, or The Seven Bowls of Tea. The most famous and inspirational part is:

It is difficult to translate the depth and perspective of Lu Tong's poem and one is better served by reading several versions. In this poem, he elucidates the effects Tea has, slowly rising from a physical sensation, to one of comfort and warmth - like the company of a true friend - and then on to the communion with the universal energy, the Qi, and all the Heavenly transcendence of those final draughts.

The poem naturally moves from the physical to the spiritual. It starts with the comfort of Tea on the most surface level, coating the throat and bringing satisfaction in drinking. The second cup moves to the emotions, satisfying the heart with the Here and Now of this moment. The third brings actual, living, experiential truth to what was before only studied by the intellect. The fourth purifies the body, as the Qi begins to rise. With the fifth cup, the whole body is felt in the flow of subtle body sensations. After the sixth cup, we begin to transcend and no more is needed. Other translations have the Qi rising up, sweeping out iniquities - sometimes from under the arms, in the seventh bowl, raising them like wings to sore to the land of the immortals.

Of course, this is just one, mild interpretation of the poem. There are many, many ways to translate and/or understand this great tea poem, and a lifetime of tea drinking would better express it (or even a single bowl). Each of us should read many translations, and find our own meaning and Truth in Lu Tong's timeless words.

Unfortunately, Lu Tong lost his life while visiting the capital. The emperor plotted to remove some of the eunuchs that were manipulating the throne. He sent them out of the inner palace to collect some dew from an important tree, believing it to grant longevity to those who drank some. Assassins waited for them in the grove. The eunuchs, however, realized the plot and fled back into the palace. They called in the army, and the emperor went along with their investigation in order to feign innocence. They ransacked the city and executed many officials, even without convincing evidence. No doubt, they used this as an excuse to get rid of some of their own political barriers. Unfortunately, Lu Tong was visiting the very same official who had sent him the tea that had inspired his poem. The soldiers captured the official and his household, including the guest. Years earlier, Lu Tong had written a satirical poem that mocked the court eunuchs, and they hadn't forgotten. He was beheaded and buried in a humble grave, his children orphaned.

There may not be a colossal gravestone commemorating him, and even much of his poetry has drifted into obscurity, but there hasn't been a tea lover since his time that hasn't learned, and often memorized, some of his poems. The above poem captures all of what tea is about: mindfulness, reverence and withdrawal from worldly concerns.

The first time I saw one of Lu Tong's poems, it was inscribed upon a Qing Dynasty jar for tea storage. While others were busy drinking tea, I found myself revolving the jar over and again, trying to comprehend the meaning of these words. I found myself imagining this man on some mountain - images of Wuyi dancing in my head - brewing his teas and writing his poems with brush and ink. I imagined the vivacity his calligraphy must have had after such seemingly powerful tea sessions. When I returned to the table that day, my tea tasted that much sweeter...