This Zen tea story is from Master Wu De's upcoming book Zen & Tea One Flavor. In the first part, we "Have a Cup" in the form of a traditional Zen story that involves tea; and then "while the next one is steeping" Wu De discusses the story's medicine. We hope you enjoy the preview...

One of the wisest professors at the University of Punditry had reached the end of a long and prosperous career, with an alphabet of letters after his name and a paragraph of awards to put in the small biographies printed on the backs of his many books. He smiled and accepted compliments, pretending to be modest while his face betrayed the fact that he was basking in it all. Despite his intellectualism and the fact that he had lived so disembodied that most ordinary people couldn't understand what he was saying - despite his "elephantiasis of the ratiocination organ" (as he himself would call it), he did deep down wish to understand the Truth, the world and even perhaps himself. He wasn't really content.

He had spent twenty years seeking answers in the library, discussing and re-discussing his ideals over and again in the jargon he and others had created. They sent memos - and later in their careers, emails - arguing the nuances of what "Truth" itself meant (because, of course, one had to establish all that before any real understanding could begin). However, now, at the end of this long, winding path through academia, he still felt hollow, as if he was in fact no closer to understanding why he was here or what life was about.

A friend of the family was over for dinner one night and described a recent trip to the mountains. He mentioned meeting a monk who lived way up a winding trail in a small temple. He said the monk had become quite famous in the region for his wisdom and perspicacity. The scholar's ears perked up. Perhaps one such as this would have the answers to life. What did it all mean? Is there a God? What happens when we die?...

As he planned for the trip, the scholar made lists of questions - crossing some out with red ink and rewriting them. He then paced his study memorizing them, as it would be unseemly to bring the actual list before the monk. He insisted that his family stay behind in the small village, hiking up the trail himself. After a long, grueling trek, he found the small temple and adjoining cottage.

The monk invited him in. When he said that he had come from far away to ask the monk some questions of the utmost importance, the old man asked him to sit down and insisted that they first drink some tea. This made the impatient scholar a bit peeved, as he had waited so many years and was anxious to test the wisdom of one who hadn't read nearly enough books, but he agreed out of politeness. As the water boiled the old monk glanced out the window at the mountains, and the scholar thought he was being ignored. He used the time to organize his questions in his mind, silently counting them off on his fingers.

When the tea was ready, the monk placed a bowl before the scholar and leaned over with the teapot. His wizened hands were perfectly steady, and the stream of tea poured so smoothly it appeared soft in the dim light - it poured, and poured and poured. Soon the tea reached the rim of the cup. Then beyond. It spilled over the table and splashed onto the mat next to the scholar with a resounding "Hey! What are you doing?!" The old monk set the pot down gently and gestured to the brimming cup with his eyes, "Your mind is like that cup, so pray tell me: Where am I to pour the wisdom you seek?" 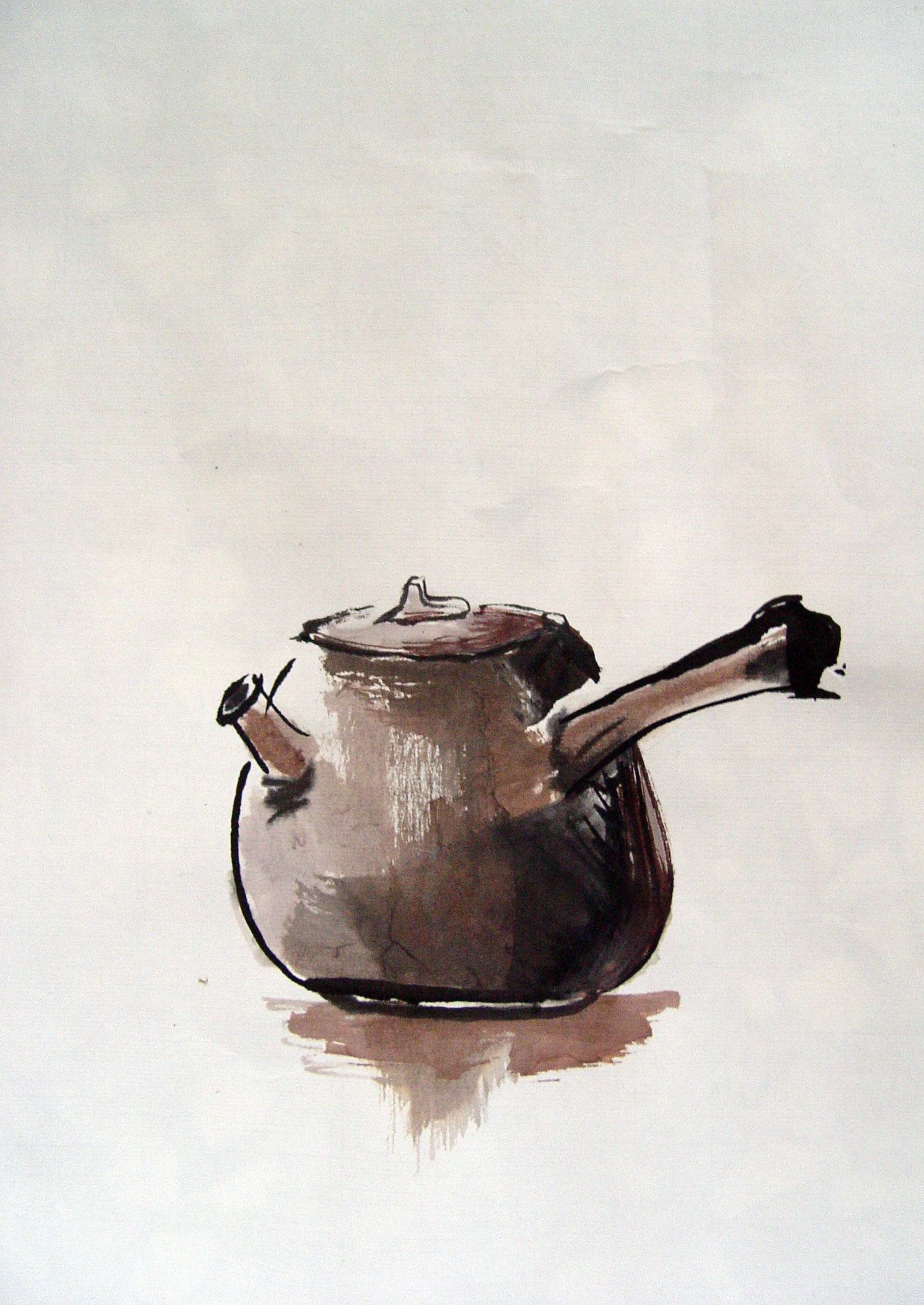 While the next pot is steeping

Is your cup full or empty? Do you come to your tea as 5.2 grams of Puerh tea harvested by the Menghai factory in 1997 using the 8582 recipe, with slightly larger leaves....or are you empty? Can your cup hold the tea you wish to drink, or has it too become something you've filled with ideas, opinions, questions or comments? And can we really enjoy the aroma, the flavor or the comfort of a cup of fine tea when we've made of it but another topic in our libraries?

There is enough to think about, worry about and debate in our lives without making the times set aside for our relaxation into something serious. Instead, let tea be just leaves and water. Approach it with an empty mind, ready to learn from the liquor itself rather than from a book on tea processing, history or other trivia. Some of that is fun and we're all curious; it can also be useful when purchasing tea, for knowing about tea production makes one an aware consumer. However, now that the tea is before us, let us wash away all the intellectual traps, whether about tea, Zen, spirituality, the Way we should live or even the Way we should drink tea...just leaves and water.

There aren't any questions about yourself to which you don't already have the answers. There is nothing about the tea you need to know which isn't taught by the liquor itself. There is no need to record the moment with an internal dialogue - no need to describe the tea. There is just leaves and water.

When asked how to practice Zen, the master responded: "Drop all opinions!"

Don't approach tea as the scholar in this cup-story. Don't come to the mountain hermitage of your tea space with a lot of questions in the form of words. Instead, sit down before your cup of tea with a clear, relaxed mind - open to any wisdom it brews. This is, in fact, how the Zen adept approaches life: as if each moment was the master, and there was something to learn from every blade of grass. The tea sessions, like any words that could describe them, are just "fingers pointing at the moon". They are a basket to convey something deeper. And that is why Japanese tea masters have often called tea books, tearooms and even their disciples by names like: "Forgotten Basket (Bosen)" or "Abandoned Basket (Hosen)". After the basket carries something, it is abandoned.

Dump out your cup. Throw out all you have learned about meditation, tea or the Way. There is no need to understand tea when we can let the tea understand us. A simple, empty cup or bowl resting on the table as it awaits tea is the perfect symbol of the Zen mind: always beginning, always humble and waiting. Lao Tzu often said that it was the spaces between a house's walls that made it useful, the hollow part of a pitcher that held the water; and, we may add, it is the freedom of the empty cup that makes it beautiful: I am that cup, humble and indiscriminate. The cup doesn't object. It holds great and mediocre tea alike. It also remains untainted after the tea is drunk. It is filled with a tea for some time and then releases it without a trace. Thoughts also pass through my mind, like tea through this cup; and let them also leave no traces to taint my future tea sessions. Let my mind also spend the majority of its time empty, so that when the tea is finally poured it will be fresh and new, unaffected by any cups I've drunk in the past. The tea I had before doesn't matter - only this cup! The moments that have gone or are yet to come also are not in this cup here before me. Without judgment, plain and unadorned wisdom is poured into me, emptied again, poured, emptied... If your mind is too full, empty it; and if it's empty, fill it. That is the natural and skillful use of a cup: empty... full...empty....full... Your cup is now empty and awaiting the tea that will soon be poured, filling you with wisdom and Truth more palpable and real than any concept of an experience can ever be. Each sip is pure, unadulterated living wisdom and monumental presence, here and now. This is your life, it isn't elsewhere and there is no need to think about it, rationalize it or analyze it - just drink it!