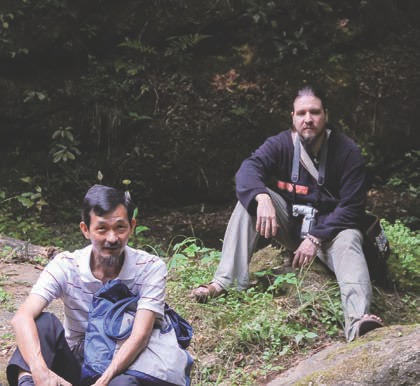 In May, we enter the season for Tea! All the harvests start to come in and we begin to gauge the year in Tea. There was a time long ago when the official start of spring was the day the emperor sipped the first flush of green tea. In a life of Cha Dao, not much has changed since then. There are now many harvests a year in commercial tea production, though there was traditionally only one in spring (with the occasional surprise in autumn). But even with more harvests, nothing compares to the spring, when the rains and weather concord to produce the finest Tea symphonies.

We decided that this month we would honor our teachers and tradition. With a good teacher and a book, anyone without a learning disability can learn algebra in two years. If you take away the teacher, maybe half of us could still learn algebra with just a book (especially if the book was written by a good teacher). But none of us could ever learn algebra without the book or the teacher. People on desert islands don't learn algebra. Even if I lived on that island and did nothing but brew tea all day from early morning until late at night I could never figure out even a third of what I know about Tea. I am not its author. It was poured into me by all the amazing teachers I have had the fortune of learning with. And when it comes to tea brewing, none have taught me more than Lin Ping Xiang.

We must remember, as well, that the best way to honor a tradition is to keep it alive - to grow it. A tradition only lives in the flesh and blood of those who are living it; otherwise it is a tomb or a dusty old book. And as living, breathing wisdom, a tradition must also grow. In serving tea, sharing our brewing methods and our approach to Tea as plant medicine, we keep this tradition alive. If we serve others around us, then this tradition doesn't just improve the lives of its members, but of the world. And everyone in this Hut is here because we love Tea, love Nature and love each other...

As this community grows up, we have to take the time to stop and bow to the generation of tea masters before us, many of whom have so ceaselessly strove to give their heart, time and love to help us prosper in our own Tea journeys. In the legendary origin of Zen, the twenty-eighth patriarch, Bodhidharma, brought Buddhism east from India to China, where it not only prospered but was revitalized and refined - ultimately it was also shared with Korea and Japan where it was also treasured. In each of these places, new enlightened masters added to the body of wisdom, expanding and growing an understanding of practice and life. There are many, including my own Zen master, that believe that a similar thing is happening in this age, as many of the Eastern traditions make their way to the West. In many ways, globalization is ending traditional cultures, languages and practices. That process isn't all bad - it expands communication and opens a door towards a future without nations, as people of a single Earth. But not all progress is good either; sometimes we throw the good out in the name of change, especially when the future is quicker and more convenient.

My Zen master often spoke of the movement of Tea and Zen into Western hands using an analogy of Bodhidharma taking Buddhism from India, where it was dying, to China, where it would thrive. Of course, this movement will not be a complete one; it wasn't in Bodhidharma's time either. But it is amazing to see the changing colors of alchemical smoke that have resulted from the meeting of ancient traditions and modern Western people. There is great beauty in knowing that we live in a world where the best teachings and teaware, methods and approaches are being blended to create new and exciting forms of culture and spiritual practice. Such cultural exchange has always happened; it's how all cultures change and grow. And into this growing, changing world of Tea, some very, very old practices are resurfacing just when they are needed most. This Global Tea Hut is a testament to that!