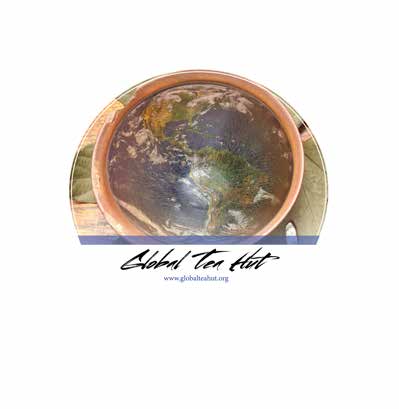 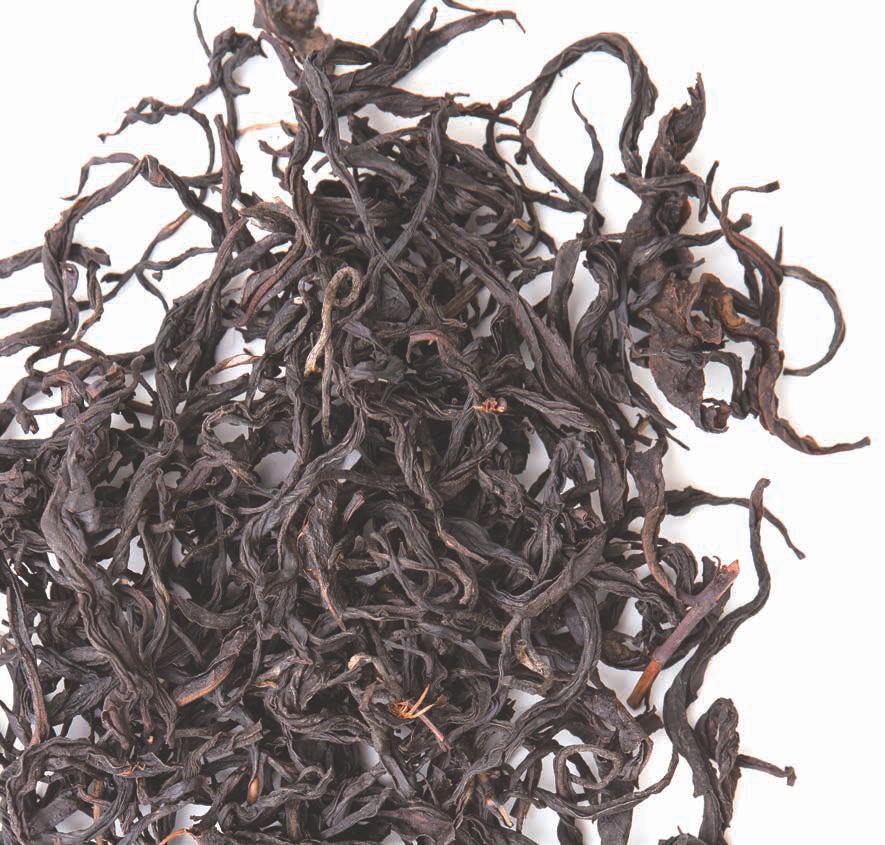 It's that time of the year again: the only tea we repeat every year, the return of the classic Sun Moon Lake red tea we've come to call "Elevation". The tea for this month is our all time favorite tea, and the one we send home with travelers who stop at our center! You could say it's our signature tea: the one we use to introduce new tea wayfarers to the path - the first wayside sign on the road. It's also one of the teas we like to serve when we set up our roadside huts, serving tea to passersby.

This amazing red tea is definitely a living tea, in all the ways we have been discussing in previous issues of these newsletters: It is seed-propagated, the trees have room and space to grow, there is a living relationship with the local ecology - undergrowth, plants, insects, animals, molds and bacteria - there are, of course, no chemicals used in its production and no irrigation either. It shines with a bright and uplifting energy that makes it the perfect morning tea, radiating your day and filling it with "elevation". It is simple and true, and you feel like you know it after your first bowl, as if a beloved friend from another lifetime has come back to you.

As you may remember, there are two main varietals of tea: small leaf and big leaf. Originally, all tea comes from the forests in and around Southwest China: Yunnan, Vietnam, Laos, Myanmar and Eastern India. The ancestor trees are single-trunked, with large wide crowns that can grow several meters in height. The roots are also deep, extending down into the Earth before branching. Then, as tea traveled north and east - naturally or by human hands - it adapted to colder, sometimes higher, climates and terroir. These trees, called "small leaf ", developed into several trunks, like a bush, with roots that extend outwards rather than down. The leaves got smaller and smaller as tea progressed north into colder climes, until they get so small in places like Japan that when they are rolled, they look like little needles (like sencha or gyokuro). Our tea of the month is a large leaf varietal, like puerh.

When the Japanese occupied Taiwan, they wanted to develop several long-term agricultural projects to help their economy. They brought many large leaf trees and saplings, as well as seeds, from Eastern India to make red tea plantations, choosing Sun Moon Lake for its accessibility and for the way the terroir was similar to the original home of these trees. Soon after, the Japanese were expelled and their gardens were abandoned. In the coming decades, these semi-wild gardens would grow up and also produce completely wild offspring, as well as adapting and relating to the local terroir in all the amazing ways a tea tree can - through the soil, the insects, rain and minerals, sun and rock. Our tea comes from one such small, organic and ecological garden consisting primarily of semi-wild trees with some wild ones scattered about.

The farmer, Mr. Shu, is an amazing man. Many of his nearby neighbors have utilized their gardens to create more industrial plantations and get rich. He says he only wants enough to provide for his family, and therefore keeps it simple and organic. He has even bought up some nearby property so that he can control the proximity his trees have to anything harmful others may be using. For that reason, the tea is incredibly clean and bright, speaking of its long heritage here in these mountains, and beyond to the older forests its ancestors once lived in, at the foot of the great Himalayas.

Further proof of Mr. Shu's love for Tea is found in the way he dealt with the betel nut trees on the new land he purchased. Betel nut is a mild intoxicant sold throughout Asia. The tree is easy to grow, requiring little care; so many farmers plant it in and around their tea to supplement their income. This kind of palm is unhealthy and bad for the land, depleting the soil and causing landslides due to its root structure. It has a negative impact on the energy of the tea as well. Consequently, Mr. Shu has killed the betel trees that were on the land he bought. The dead trunks have been invaded by grubs that quickly consume the pith of the betel trees. When split open, this makes a nice fertilizer for the tea trees. 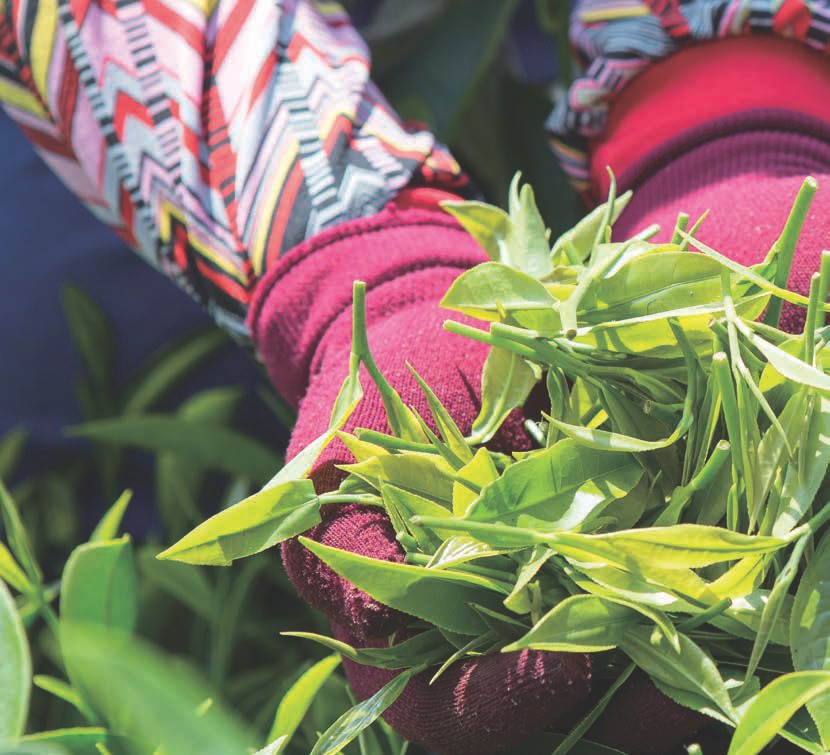 In Harmony with Heaven

Mr. Shu is a second-generation farmer with an incredible attitude. While his neighbors constructed new-and-improved houses with satellite dishes, he stayed humble, simple and in love with his work and trees. Two years ago, there was a drought and bugs that decimated the area - insects that come only every decade or so. When we talked to him about it, he responded with great wisdom, proving that - like the ancient Daoist texts - even the simplest people can achieve harmony with the Dao, mastery of life and a great wisdom that we all can learn from. He said that at that time, he received less. If he were to stress about that, or worse yet, compromise his values and turn to pesticides for help, it would be like rejecting his destiny, arguing with Heaven. Furthermore, he said that it would show how ungrateful he was for what Nature had given him. "We should be grateful for what Nature provides and accept the times that Heaven takes from us - learning from times of having less, or even losing what we have, as much as in times of abundance. We all will face lack and loss sooner or later. If you resist, and argue with Heaven that your destiny is unfair, you don't learn and there will be greater misfortune later. Better to accept whatever Nature gives us and be grateful for it. I have less this year, but it is okay because I saved when I had more last year; and maybe next year I will have more again." There couldn't be deeper life lessons than these!

Once again, it is important to understand that what most Westerners call "black tea" is actually "red tea". Ordinarily, it doesn't matter what something is called, but in this case there is actually a problem, because there is another kind of Chinese tea that is called "black tea" (characterized by it post-production, artificial fermentation). So if you call red tea "black tea," then what do you call black tea? The reasons for this error are to do with the long distances the tea traveled in chests to Europe, and even more importantly with the general lack of information for the first few hundred years tea was traded. Europeans weren't allowed inland in those days, and never saw the tea trees or the processing either (except some roasting). Buying through middlemen in broken pidgin, you could see how easy it would be to spread misinformation. We repeat this every time we send a red tea, because it is an important mistake that we tea lovers have to correct in the world, so that the real black tea can have its name back! 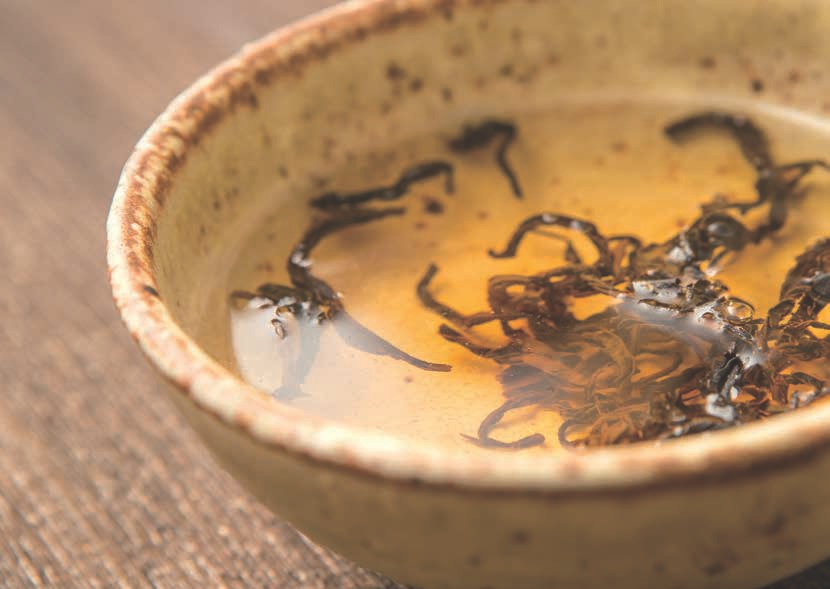 Most red tea is processed in 3-4 phases: first it is picked and then it is withered, traditionally on bamboo trays stacked on shelves built to hold them. The withering of red tea is very long, usually from twelve to twenty-four hours. It is then rolled for an exceptionally long time, to continue the oxidation and break down the cells. It literally turns into a pasty mass in the process. Then it is dried, usually in an oven. Our tea, however, is completely different. The farmers think we are crazy, but we ask them to decrease the withering and the rolling period, leaving some green in the leaves, which you will see when you brew them (essentially, we've asked that the tea be less oxidized than that which is produced commercially). The reason for the heavy oxidation in normal red tea processing is to make the tea sweet and delicious. Nevertheless, we have found that such extreme processing removes some of the tea's Qi, and distances it from the mountain and deep essence it touches. This is especially relevant when the tea leaves were plucked from old-growth, big leaf tea trees. The leaves of these large-leaf trees are often bitter and astringent, but we can accept a bit of that along with the sweetness, can't we? And isn't that a significant life lesson as well? In the end, we'd rather have a slightly less sweet tea with incredible and relaxing Qi than the other way around.

Like last year's, the tea this year was a bit more oxidized than usual, due to a lack of rainfall. Mr. Shu still decreased the withering and rolling for us, but not as much as in previous years. The raw tea leaves themselves were also more astringent, so a bit more oxidation was necessary.

We recommend putting these leaves in a bowl, watching them unfold in the oldest brewing method around - older than the pyramids, in fact! Elevation is the penultimate bowl tea! It often defines this brewing style, as so many of us started our tea journey drinking this very tea in this very way. It is a great morning tea, leaving you awake, bright and calm. Try waking up a bit earlier one morning, alone or with some loved ones. Put more or less leaves in your bowl, to your taste, and fill it with hot water. As it steeps, have a moment or two of meditation. Then pass the bowl between you, sharing a single bowl as you share a single encounter, a single chance...

As we suggested last month, take a hike to a water source and gather some fresh water yourself. Store it in a sacred urn, waiting for that perfect day when you are free. If you can, strike up some coals and let the kettle of fresh spring water awaken to a strong and lively fire. With such leaves, water and heat, the session is sure to be transcendent. And what if it were outdoors in Nature?

If ever there was a month to try heating your water on coals, this is it! If you can, strike up some coals and heat a kettle over a true flame, awakening these big red leaves in a glorious steamy swirl. Some nice spring water heated on charcoal will make this one of the best tea sessions you'll have all year. Elevation is an amazing, humble and simple tea. It teaches us to celebrate the simple, ordinary moments in life.

This is an amazing tea to have in the morning. Try sitting cross-legged and putting a few leaves in a bowl. Sit and soak up the warmth and feel how it invigorates you. It has an amazing energy that calms and uplifts simultaneously. Try this for a few days and you will find that afterwards your outlook each morning is getting brighter and your life is starting to change - and all from a few leaves scattered in a bowl...