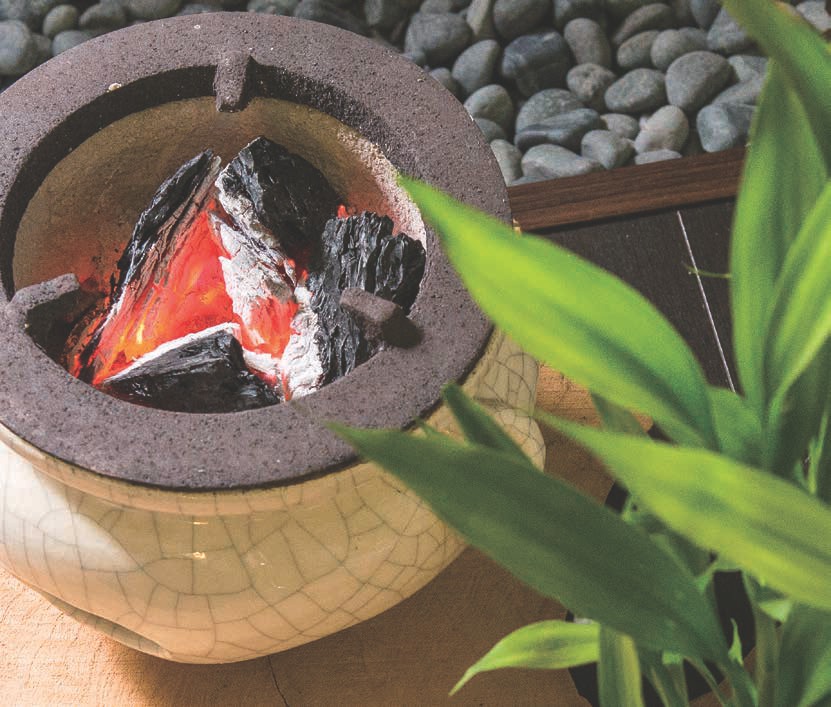 Wu De sat down with Master Zhou to talk about fire and its role in the eta ceremony. Learning from the generations above us is one of the highlights of living in Taiwan. Zhou Yu (周 瑜) is the founder of Taiwan's oldest and most famous tea house, Wistaria. He has decades of experience with tea on all levels. Like most tea masters, he is hospitable and generous with his time and wisdom.

There is an old Chinese adage that "water is the Mother of Tea, a teapot its Father and fire its Teacher." There seems to be a lot of discussion about the importance of proper water - source and storage - as well as a lot of books and articles on the best kinds of teaware; but little is ever said about the role fire plays in the preparation of fine tea. I thought I would sit down with a master and get some ideas about what role fire plays, and the ways in which it can 'teach' our tea.

In most Far Eastern philosophies, including Chinese, Korean and Japanese, the world is divided into five elements, called "wu shing" in Chinese: water, fire, earth, wood and metal. To the ancient tea sages, the perfection and balance of all these elements was necessary in order to create the best cup of tea. Lu Yu himself carved elemental symbols on all of his teaware and spoke at length about how to find the perfect leaf (wood), water and fire, as well as how to mix them together into "liquor like the dew of Heaven." Like Zhou Yu, he also had many ideas about what made the ideal fire for tea preparation.

Zhou Yu mentioned that it was important to understand that in Chinese tea, one wants what is called "martial heat", which means that the water is boiled quickly. If the water is boiled too slowly, it will lose much of its Qi. This is especially important when using pure mountain spring water. For us, this advice is especially relevant since we hike up so many mountain stairs once a week to get our tea water. Zhou Yu suggested tasting different waters oneself, not only to establish water quality but also to compare different heating methods and help cultivate sensitivity. He poured out two teas, one heated quickly and one slowly, and I found that the second did in fact taste flat, and was rougher on the tongue and throat. Zhou Yu showed me that this second water had been boiled using an alcohol burner, common throughout his teashop. "These alcohol burners are actually not designed to boil the water, only to keep it warm. We have them because we bring boiled water out from the back and these burners look nice and do a good job of keeping the water at a nice temperature."

After that Zhou Yu brought out two kettles to teach me another lesson about fire. He used one of the kettles until it was half empty/full (depending how you see it), before adding some cool water to the boiling water. He then poured a cup from each. I found that the unaffected water was much better. It was smoother, cleaner and since we were drinking good mountain spring water, it was easy to notice the difference in Qi. Zhou Yu said that we should always use all the water in the kettle, or dump out the last bit, before adding more. Adding cool water to hot water shocks the Qi of the water and takes away some of its smoothness. I experimented with this more at home and found that almost every time I could identify the water that had been affected in this way, and always in a negative way.

Knowing that different teas prefer different temperatures of water, I asked Zhou Yu whether we should first allow the water to reach a rolling boil and then cool down, or try to reach the proper temperature in the initial heating. He said that at the tea shop they of course boiled the water for sanitary reasons. "Throughout history different tea sages have disagreed on this point. Some thought it better to boil first, some to gauge the proper temperature each time. I think it depends on the water," he said. He went on to suggest that some very clean mountain waters need not be boiled for sanitary reasons and therefore it might be better to never let them reach a rolling boil, as oxygen is depleted, and the texture or Qi changed. Whether or not we let the water boil, one should never let it boil for very long. Zhou Yu sent me to look at the section of the Cha Jing in which Lu Yu discusses the best water sources. He says that the best waters are mountain springs and rivers. He then goes on to say that the water shouldn't have too much Yang energy, and therefore shouldn't come from turbulent, churned water. Zhou Yu said that a rolling boil was in effect the same as a cataract. However, he did seem to think this point of boiling or not of minor importance, and immediately launched into a longer lecture about using the senses to develop sensitivity. 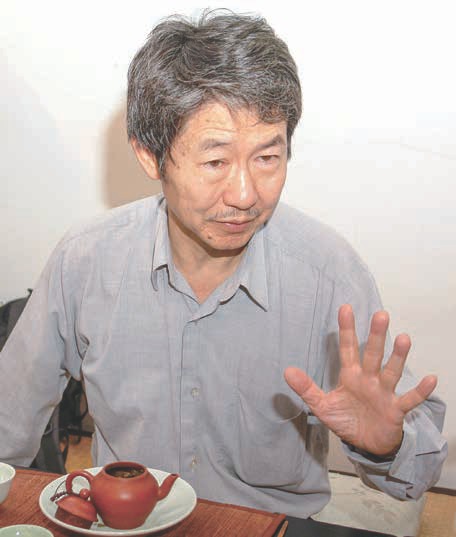 In one of his favorite lectures, Zhou Yu reminded me that sensitivity, refinement and real appreciation come when the senses are aligned with what we are experiencing - when the mind is free of discursive thought and focused on the moment at hand. For that he suggested connecting to the fire in tea preparation as directly as possible: "Feel the temperature through the handle of your kettle, listen to the boiling as 'the wind soughing through the pines'; and then when it is time, you'll know." Watching his gentle old hands lift the kettle and quietly cover the pot and leaves said more to me than the words he had used. To master the Way of Tea, we must make it a part of our lives, a part of us. That means that the process of brewing tea has to flow through us, as our intuition finds the point at which the water is ready and determines the stream that will embrace the leaves. And the way in which the water is poured is perhaps the point at which one's technique becomes most evident. Beyond that it's all mind and the absence of mind.

Zhou Yu said that the ultimate form of fire is of course hardwood charcoal. "Losing touch with the elements and with Nature is the saddest romantic tragedy in the history of humankind", he remarks poignantly, and one is left with the feeling that he was born in the wrong age. He reminded me that tea is not a beverage to quench thirst, though it sometimes is made in that way. Truly, most everyone - no matter what culture or method - brews tea to relax, whether alone or with friends. Like the true master, Zhou Yu asked me to wonder how one could ever rush relaxation. "Most people think using hardwood charcoal is a hassle, when actually it just takes a few extra minutes and the rewards are well worth the effort. I would never brew any of my higher quality teas without it." Like most masters I've had tea with, Zhou Yu seeks to refine the tea experience with the best leaves, purest water, antique teaware and hardwood charcoal. I, too, have found that the water heated with charcoal is very different, in an almost indescribable way. The temperature is always more direct, the water brighter and stronger in Qi. The ambience such a brazier brings to the experience and the effect it has on the water are only the beginning for masters like Zhou Yu, who recognize more subtle levels where all the elements are working together harmoniously. "Without charcoal, you're missing the element of fire, and your five elements (wu shing) have become four", he says.

Lu Yu also devoted much of his time to finding the purest water and fire for tea preparation, and through that process a connection to Nature. "In tea, there aren't any short cuts: to merely pluck tea from the shade and dry it on a cool evening is not to truly process it; to sip it for flavor or sniff at it is not to be discriminating; to bring along a rusty old brazier or a stinky bowl is not proper teaware. Resinous firewood or charcoal from one's kitchen do not make a seemly fire. Gathering water from turbulent rapids, dams or flood water is not suitable for tea...," he says in the Cha Jing. We could replace some of his proscriptions with the contraptions and gimmicks used to cheapen tea nowadays and make the process easier, less connected - to Nature and ourselves - and other forms of neglect that have set in since the time when Lu Yu wandered the mountain crags alone, his teaware in tow; finding his own leaves, roasting and grinding them in the shade of a bamboo grove. He would carefully remove the fresh water he'd collected from the spring below and light the charcoal he had made at home and carried in an elegant box within his basket. Can you see him sitting there, the sun setting behind the distant peaks?

There really is a special affinity between Man and fire that speaks of Nature, lonely vistas and time that is free and open. You can't rush a fire. You can't turn a knob and control it. It doesn't come on and off when you want. It requires care and skill to ignite properly, and effort to maintain and master; but once you've experienced the joy of sitting next to a portable brazier or sunken hearth and boiled your water in this way, tasting the difference in quality the use of charcoal has on the water's temperature and depth, you'll understand why masters like Zhou Yu would never even consider brewing their better teas without it.

A lot of the highest quality teas are also very rare. Because of that, Zhou Yu stressed to me, it is very important that we take the time to truly appreciate them. Many old teas are getting rarer and more expensive over time. It would be a shame for all the future tea lovers who may never get a chance to drink a tea like Song Pin, for example, if those who have had the chance to try it have done so too quickly and capriciously, without fully enjoying the tea. "To me, a big part of that is taking the time to get the right water, lighting some charcoal and sitting back with plenty of time to just be with the tea", he says.

It isn't always easy to get a true tea master to talk, especially at length, and Zhou Yu was happier to show me what he meant than to talk about it. He left and returned with a Qing Dynasty zisha pot filled with some old puerh from my grandfather's day. We hushed up and let the charcoal do the work. I took his advice and let its warmth and placid aroma fill me. As my thoughts started to thin, the water started to sing, first quietly like the tuning of instruments, but slowly gathering to become a symphony. A few minutes later and a soft, old hand silenced it. As the water steamed and poured over the small pot, permeating the tea, I thought perhaps I understood the lesson the fire had taught it... 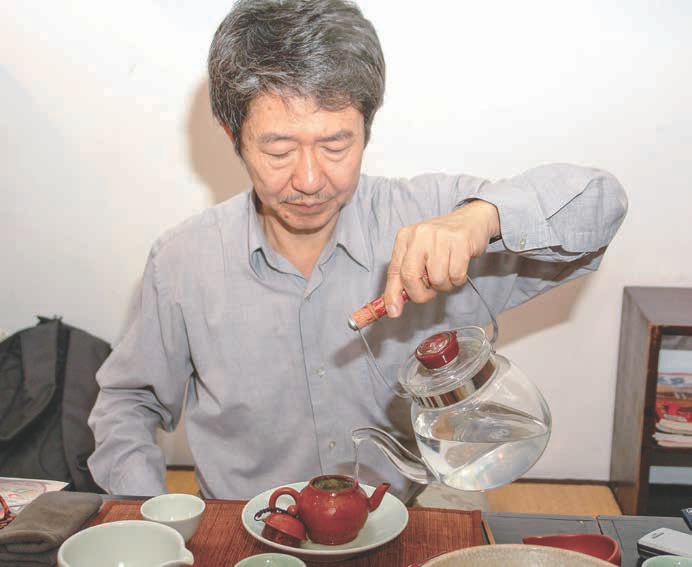