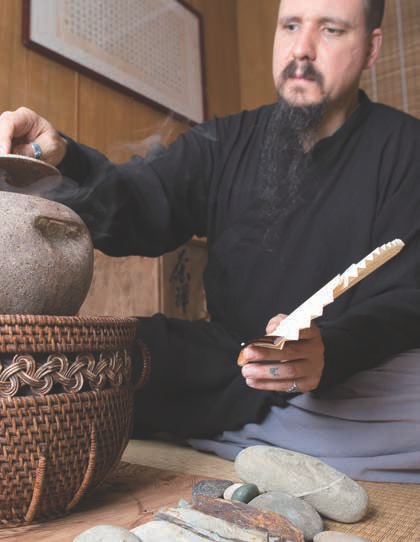 In September, we enter the final quarter of the solar year. It's also a very important month in the Chinese lunar calendar because it is the largest moon. This month, the weather starts to get cooler and the first hints of autumn arrive. We find that our teas start to shift from green teas, sheng puerh or more lightly-oxidized oolongs to darker, more heavily-roasted oolongs. Cliff Teas, especially, start showing up with more frequency. This means more gongfu tea, of course.

The Moon Festival, or Mid-Autumn Festival (Zhongqiu Jie), is one of the most important Chinese holidays of the year. Family members gather to have picnics or meals and stay up to see the full moon, which is a symbol of abundance, harmony and luck. It is also a romantic time, and you'll see lovers out on benches holding hands celebrating the fullest moon of the year. Chinese people eat pomelo as a symbol of fortune and abundance. They are huge and delicious fruits, gifted to the center from many family and friends. We also eat moon cakes, which are traditional sweets with an egg yolk in the center, combining sweet and salty - like life. (We prefer the ones without the eggs, however, some of which are made with amazing pineapple filling!)

For the second year in a row, we are continuing our new annual tradition of giving you a bigger and special edition of this magazine as a gift for the Harvest Moon. Last year, we published a monumental work on puerh tea, which you can check out on our site if you haven't yet read it. This year, we have put together something even more special. Many of you will know that we have long promised to start translating some tea texts from Chinese and Japanese. Well, we thought that if we were going to foray into publishing works on tea, we'd have to start with the most important book of all, the Cha Jing, written by Lu Yu in the Tang Dynasty.

Our dear tea brother Matthew London, whose loving eyes have been improving this magazine for years, contributed this month's cover photo of a statue of Master Lu from his forthcoming book The Spirit of Tea. His words describing the photograph, we feel, introduce this amazing issue of Global Tea Hut much better than we could. Matthew writes:

Lu Yu has been revered as the Sage of Tea since he wrote his magnum opus in the Tang Dynasty. As early as the beginning of the Song Dynasty, tea dealers were making offerings to small figures of him to bring good luck. In time, artists also began to honor him with tiny figurines and massive statues, made from clay, porcelain, stone and bronze. This contemplative statue of Lu Yu is at the Great Tang Dynasty Tribute Tea Museum in Changxing, Zhejiang. Lu Yu wrote in the Classic of Tea that the Purple Bamboo Shoot (Guzhu Zisun) tea which grew on these bamboo-covered hills was the best in China. It became the favorite tea of the Tang Emperors and the first Imperial tea factory was built here to ensure a supply of this tribute tea. An excerpt from the first chapter of the Cha Jing is written on the wall behind the statue.

This seminal work is only one of a handful of complete translation in English that we know of, and the best one, by Francis Ross Carpenter, is out of print. As such, this is an important landmark for Global Tea Hut, and for tea in the Western world. A tremendous amount of effort has gone into translating this text from classical Chinese, including a plethora of footnotes to help you enjoy Master Lu's masterpiece more fully. May it deepen your love of Tea, for it has been created and offered by hearts wide open.