James Norwood Pratt published his first book on tea in 1982. He is widely recognized as one of today's leading authorities on tea and tea lore. We are fortunate to start off our introductions of Master Lu with a modern tea sage's take on the old tea saint. Norwood's graceful pen helps prepare the heart for the poetry of Lu Yu's brush.

Once upon a time in China a man discovered a Spirit inhabiting a plant. The Spirit entered every one who imbibed the nectar of this miracle of vegetation the Spirit inhabited. If you were cold it would warm you, if you were hot it would cool you, if you were weary it would refresh you, if you were stressed it would relax you. It protected you against countless ills and ailments and provided endless hours of leisure, friendship, sociability, and conversation. What amazed the man most of all was how the leaf and nectar - body and blood - of this plant affected his senses in myriad ways, with many different colors and forms and flavors and aromas, and sometimes transported him beyond the realm of the senses altogether.

This vegetative Spirit gradually became the man's Familiar Spirit and from then on they remained inseparable. Now this was a man with no other calling except to give utterance to what exists in realms no word has ever entered. He longed to express somehow the mysteries his Familiar Spirit revealed to him daily, but how could he hope to succeed - how convey goodness the mouth discovers, how boiling kettles sound like wind in the pines?

Aided by the Spirit's patient inspiration, he found words; or rather, since he was Chinese, characters - just over seven thousand - which concealed as much meaning as they revealed and thus perfectly expressed the gospel and mystery of tea. After perhaps twenty-six years in the writing, Lu Yu completed The Book of Tea about the Chinese Year 3458, or 760 CE. 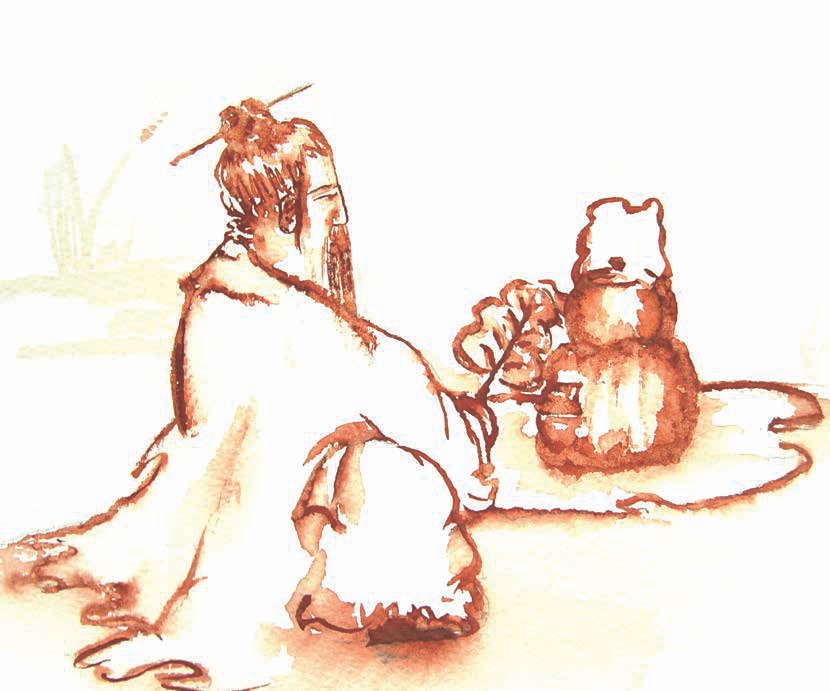 Lu Yu was not China's first tea lover. The tea plant had already been known for thousands of years. At first it was food and medicine, and then a tonic of sorts before becoming a beverage. Tea became a drink only by degrees, therefore, over centuries, and gradually the drink made from the succulent leaf of this camellia, like the plant itself, spread from China's interior down the length of the Yangtze River to the Yellow Sea. Like the farmers, Daoist and Buddhist monasteries throughout this vast stretch of China took up tea cultivation, much the way Roman Catholic monastics planted the wine grape everywhere they went in Europe. In Asian culture we may as well consider tea a sort of Taoist and Buddhist communion: A shared yet wordless transmission of peace; A Mirror of Soul. An orphan raised in a Zen monastery where he obviously did chores in the tea garden, Lu Yu recognized over a thousand years ago that tea - like wine - is one of those agricultural products which at its best becomes a work of art. Tea at its best was what Lu Yu's Book of Tea was all about - where it's found and produced, how to recognize and choose it, and - trickiest of all - the best way of preparing it for maximum enjoyment.

Lu Yu treated these "country matters" with a poet's refinement, and his primer of pleasures made him a celebrity, as these things were measured in Tang Dynasty China. Images of him soon appeared in every tea establishment, like statues of a patron saint, and if business was bad the saint's image might be resentfully doused with boiling water. Mainly business was good, however, as Chinese people increasingly discovered tea not as a soup or salad or tonic but as "pure drinking."

Within decades the practice grew so popular, the emperor was offered tribute in tea and non-Chinese wanted to learn it. Tang emperors began to export tea beyond the Great Wall in exchange for horses. Not too long after Lu Yu's death, one of the border tribes offered a thousand horses for a copy of The Book of Tea itself, and the Emperor of Japan demanded Japanese subjects present him with incredibly rare "Tribute Teas" such as the Tang Emperor received.

In slow motion, therefore, tea exploded across Asia much the way Gutenburg's invention of printing was to explode across Europe - and nothing was ever to be the same again. Consider the countless number of times per day print in some form enters our lives. This is exactly how Asian people have experienced tea ever since Lu Yu, and this is why they esteem him a cultural hero, perhaps one of the immortals. Thanks to Lu Yu, simple, healthful tea became one of the arts of civilized living for all Asians, from the village to the palace. And just as wine as a cash crop evolved from antiquity's terracotta amphorae to the medieval barrel and the Renaissance invention of the bottle, so too tea evolved with time, as ways to process tea leaf and prepare the drink continued to develop and change.

Under the Tang Dynasty Lu Yu boiled tea leaf, but Song Dynasty tea lovers learned how to powder the leaf and whip it with a bamboo whisk in hot water. You drank the resulting leaf in suspension the way Japanese drink matcha, the powdered tea used in chanoyu - the "Japanese tea ceremony." This Songera style of tea was preserved in Japan as if in a time capsule, while the Mongols destroyed Song tea culture utterly in China. By the time the Ming drove out the Mongols in the 1300's, China was producing loose-leaf tea like ours today while Japan persisted in the ancient way of tea manufacture, preparation, and ceremony. Both the teapot and the practice of steeping our familiar loose tea leaf are thus relatively recent Chinese innovations.

Japan's chanoyu, an aristocratic "high tea" in rustic disguise, acquired its final form from the Zen practitioner Sen no Rikyu, a Japanese contemporary of Shakespeare's. Rikyu's cult of tea may appear insanely refined to outsiders but it remains the ultimate practice of mindfulness - tea as medium for a religion-free form of Buddhism practiced long before Japan's first encounter with a teapot. It seems only fair to conclude, however, that in Japan it's the ceremony that's the most important aspect of any tea ceremony, while in China the tea itself remained most important.

China developed the gaiwan, or covered cup method of steeping and imbibing leaf tea, and also invented the teapot. The first teapots were large earthenware, and then later small "gongfu" pots were invented in the South, used for steeping oolong tea leaf, a new type of semi-oxidized tea. These were the new ways of tea prevailing in China by the time Europeans made the first direct contacts by sea with China and, inevitably, got their first sip of tea. In 1608 the first tea ever sent for sale in Europe arrived in Amsterdam, half a world away from its origin. Tea had already been known for thousands of years in Asia, before the West got its first taste just four hundred years ago. 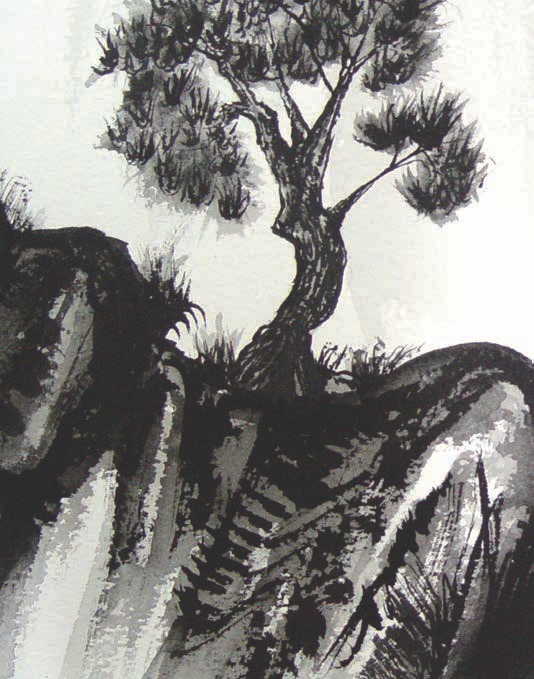 Tea, in a short four centuries, has now drenched every culture on earth: Mankind drinks more tea than any other beverage but water, following traditions that range from Japanese tea ceremonies to Russian samovars to Scottish scones in the afternoon - India chai, China green, Tibet butter tea - you name it!

The worldwide progress of this famous plant has always required a Lu Yu and a "Book of Tea." As times and teas changed in China, successors authored almost a hundred re-writes of the Book of Tea to describe new ways of enjoying the new forms of tea. Tea has from the first been a practice whose enjoyment must be learned from a master, a foreign practice from somewhere beyond the border, like an acquired language or art or skill. And in every culture it has entered, tea has inspired the best loved of all the applied arts - teaware. Whether you think of Chinese porcelain, Japanese earthenware, or English silver, it seems safe to say the cult of tea has produced some of the world's finest artisan craftwork - objects intended for us to hold as well as to behold, things to love.

Each culture learned ways to love teatime as a moment of relaxation amidst the demands of daily life. But from the ancient Asian point of view - as Lu Yu might say - there is more to tea than the mental and physical refreshment it confers. Tea is also a sort of spiritual refreshment, an elixir of clarity and wakeful tranquility. Respectfully preparing tea and partaking of it mindfully create heart-to-heart conviviality, a way to go beyond this world and enter a realm apart. No pleasure is simpler, no luxury cheaper, no consciousness-altering agent more benign. In every culture, taking tea somehow evolves into a ritual re-enactment of communion, a spiritual practice in other words, and by gradual degrees this becomes a Way - a Mirror of Soul - in its own right. The first priest of this secular Way of Tea was the author of China's Book of Tea, Lu Yu. 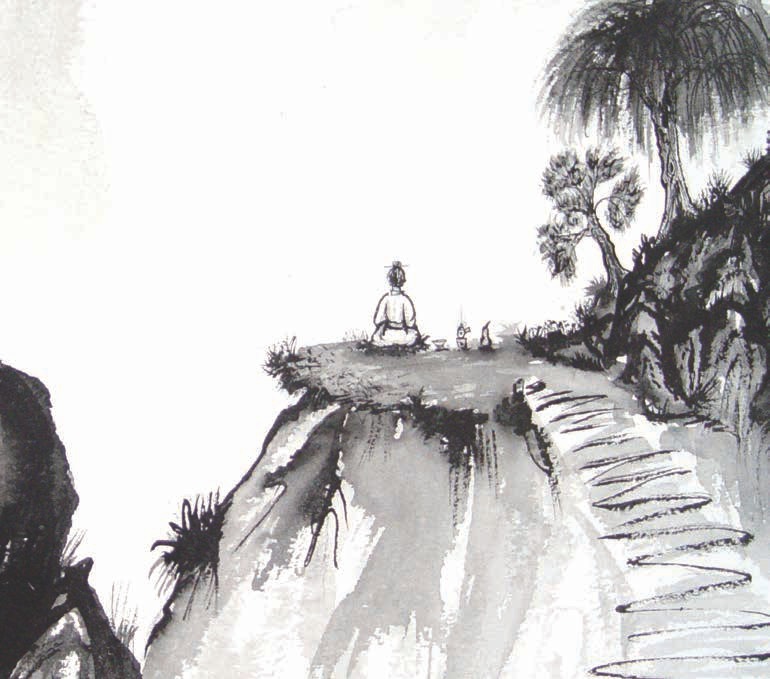