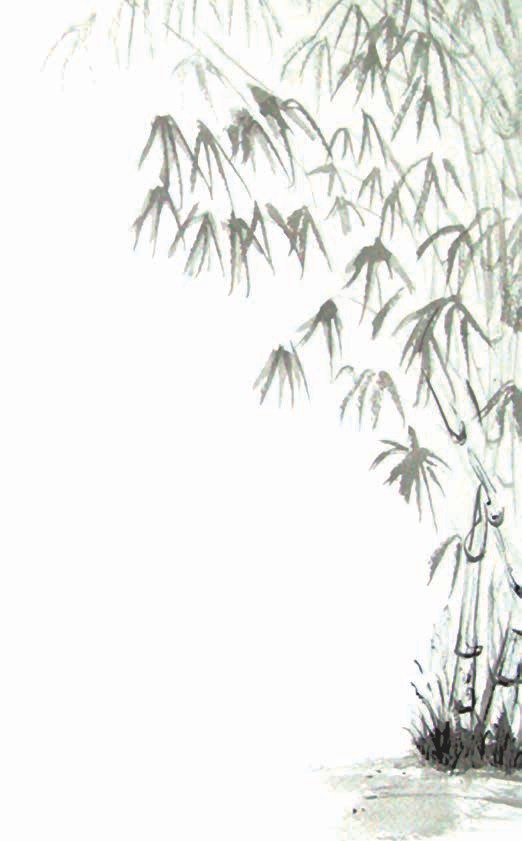 Understanding the life and times of Master Lu makes reading the Tea Sutra all the more enjoyable. Lu Yu lived an amazing life, the kind of legends. His story is as inspiring as the words he left behind. Through it, we look out onto the tea vistas he saw, wondering if the same energies swirl in our own bowls 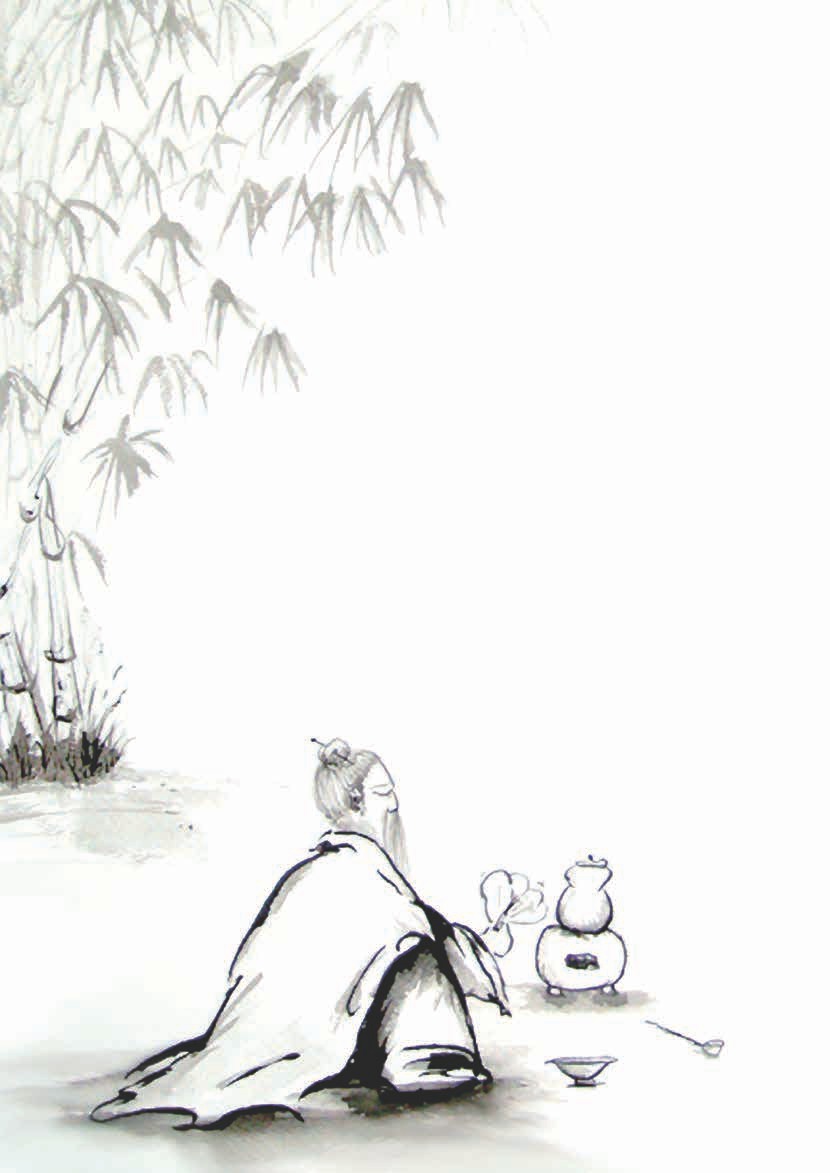 Lu Yu was the most important scholar to ever write a detailed treatise on tea. His Cha Jing (茶經), the Tea Sutra, is the definitive book on the cultivation, processing and preparation of tea from the ancient world. It also teaches us how to find the Universal Dao in the particular. Like so many sages before him, he recognized the power tea had to speak to the soul, and spent his life trying to convey its teachings in words. Down through the ages, it would be those 7,000some odd characters that would be brushed again and again as the paragon of tea spirit for Chinese - while Lu Yu himself would become a legend, an immortal revered and even worshipped in some places.

Scholars estimate Lu Yu's birth at around 730 CE, in Jinling County (modern day Hubei Province). At that time, China was in another of its many periods of war and chaos, and for whatever reason Lu Yu was abandoned as a baby. Like the mythical "Hero with a Thousand Faces", Lu Yu was left in a basket by the river. He was found and adopted by the abbot of the famous Dragon Cloud Monastery and raised as a novice. At the monastery, he was first exposed to tea, and we can only envision that it affected him in the same ways it has affected us.

Lu Yu was more of a scholar than a monk or meditator, and to discipline him the abbot gave him the job of tending the oxen. This, however, didn't seem to bother the boy as it allowed him time to study. Even today he is often depicted laying astride the back of an ox and leisurely writing calligraphy. He was also in charge of the cultivation and preparation of the monastery's tea, apparently making such excellent tea that the abbot soon refused to drink a bowl not poured by his hands.

Eventually the wide world, and we can only imagine a longing for books and new experience, prompted Lu Yu to leave the Monastery. In 760, before he was fully ordained, he fled the monastery to make his own way through the burgeoning Tang Dynasty.

Amazingly, Lu Yu joined up with a theatrical troupe where he performed as a clown and even wrote plays for several years. He never lost touch with the tea that had stirred his soul as a boy in the monastery, though. In his travels, one imagines, he would find time to visit the various tea farms, try new teas with fellow travelers and locals alike - absorbing as much information as he could. In one such tea session, his passion for tea and sharp intellect attracted the attention of a local governor, Li Qi Wu. The older man offered to sponsor the young man's research and education, impressed by his writing and acting abilities. With access to the provincial and private libraries of his patron, Lu Yu was in scholar's bliss. He studied earnestly, took more trips to tea-growing regions - including an extended stay in Hu Zhou where he and his sponsor were forced to flee because of the political turmoil of the age - and befriended the literati and artists of the day, including the poet Huang Pu Zheng and artist Yan Zhen Qing. (Another version of the story has it that Li adopted him when he was a boy and that he spent part of his childhood growing up in his household.) After some years studying, Master Lu wrote his opus. 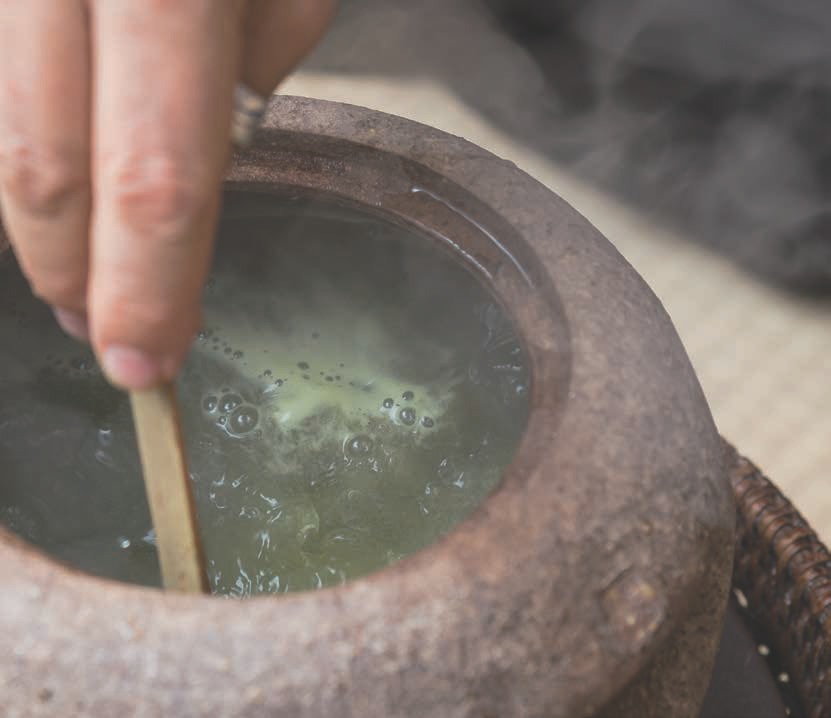 The Tea Sutra is an in-depth study of the origin of tea, the tools and instruments used to brew it, as well as the legends, anecdotes and the principles that guided the tea ceremony of that age. Lu Yu scorned the addition of other plants, flowers or fruits to tea, stating that real tea connoisseurs must drink the leaves pure and simply to taste of their essence. During his lifetime, tea was processed into cakes, then ground into a powder form. Lu Yu refined the process and popularized it amongst the literati and royalty of his day, and his book was a huge success - widely distributed even long after he was gone.

Lu Yu believed in the purification of every aspect of tea, and by concentrating on the refinement of the tea, the water, the fire, etc. one could also master oneself. Lu Yu talks extensively about the cultivation and harvesting of tea during his time. He speaks of the guidelines for plucking the best quality tea, whether from a wild or cultivated plant. He noted that leaves which were picked early were what he called "Cha (茶)" and the later flush "Ming (茗)", borrowing terms already well-established before his time. After the initial leaves were picked, the second growth would be stronger and juicier as a result of the stress the first harvest had put on the plant. This second flush was of much higher quality, flavor and texture, and valued the most by true connoisseurs. The use of these terms no doubt predates Lu Yu, exemplifying that the cultivation and appreciation of tea had already been refined greatly by the time that he began his studies. Eventually, tea connoisseurs, emperors, artists and the intelligentsia alike, would all be asking if the tea was "Cha" or "Ming", perhaps demonstrating that even in his own lifetime Lu Yu had become respected and renowned even by the Dragon Throne itself.

Lu Yu also demanded that the whole tea ceremony be treated with reverence, as an art in the purest sense. He outlined all aspects of tea preparation from the baking and grinding of the leaves, the water preparation, and even the arrangement of the tea sets. He emphasized the higher ideals of enlightenment throughout the book, suggesting that the golden mean of Confucianism, the Buddhist quest for higher truth and the ancient Daoist quest for harmony with Nature all found their perfect expression in the tea ceremony. He also suggested that tea drinkers should be virtuous above others, so that the tea ceremony itself was pure, perhaps knowing that as such it could result in a sharing of hearts - life-changing experiences as one comes to know the Dao.

Like the other tea sages of his day, Lu Yu also spent much of his time sleeping in temples, winding up through mountain peaks and valleys, talking to farmers and drinking tea beneath the moon. He suggested drinking three bowls, a reference to Daoist numerology, signifying that enlightenment was possible after these three draughts. He himself tried to refine all of the five elements to their purest states to prepare the ultimate bowl of tea, and given that he had studied Daoism and Buddhism both for many years and was living a quiet life in retreat from the World of Dust, we can only assume that it wasn't the best flavor or aroma that he was chasing in the purification of the elements. In fact, some scholars believe that Lu Yu traveled to Mount Mao in 779 CE to study Daoist alchemy, and that he was quite versed in all the theory up until that period. All of his teaware was also covered in such numerological and geomantic symbols: three legs on the tripod, three trigrams, three vents, etc. Therefore, much of what you will read in his work is esoteric, with layers of meanings that aren't so accessible to translation. It may seem that the language is terse or simple, or that he is often conceitedly hammering the "right way" to brew tea, but this is not the case. Actually, he is demanding reverence and attention to detail for the libation he loves, hinting at alchemical references with every turn of the brush - and simple brewing instructions twist off the page to soar amongst the clouds. This should come as no surprise to any tea lover with experience in tea ceremonies.

It is said that in his old age, Lu Yu returned to the monastery where he grew up to share tea with the abbot that had raised him. He had come full circle, realizing that the peace and quiet of the mountain were actually more in tune with the Way of Tea - as opposed to the scholarly, intellectual method he had pursued for most of his life. His trip through the carnival of senses that is the World had brought him back to the peace that his life had begun in.

Lu Yu then retired to Xiao Qi (modern day Wushing county, Zhejiang) to spend the rest of his days in quiet seclusion, drinking tea and meditating on his growing beard. It is assumed that he left behind a whole body of other work besides the Cha Jing, including an often-mentioned book on the best sources of water in China, though sadly all the other ink that flowed through his brush was later lost. Even the version of the Cha Jing existent today only dates back to the Ming Dynasty.

Lu Yu is in so many ways the source of magazines like this. He was the pioneer who first popularized the idea that tea could be a Way of life beyond just spirituality and meditation, beverage or elixir. He helped establish the culture of collectors and scholars that would flourish later in the Song and Ming dynasties. So much art - calligraphy, teaware, pottery and even music - owes respect to its heritage as a descendant of the work that Lu Yu began. I am humbled by his presence, and thinking of the difficulties he overcame - the distances he walked, sandled and robed, to write his opus makes me want to set down my pen and allow one of his friends, the aforementioned poet Huang Pu Zheng, to express my feelings:

The Day I Saw Lu Yu off to Pick Tea 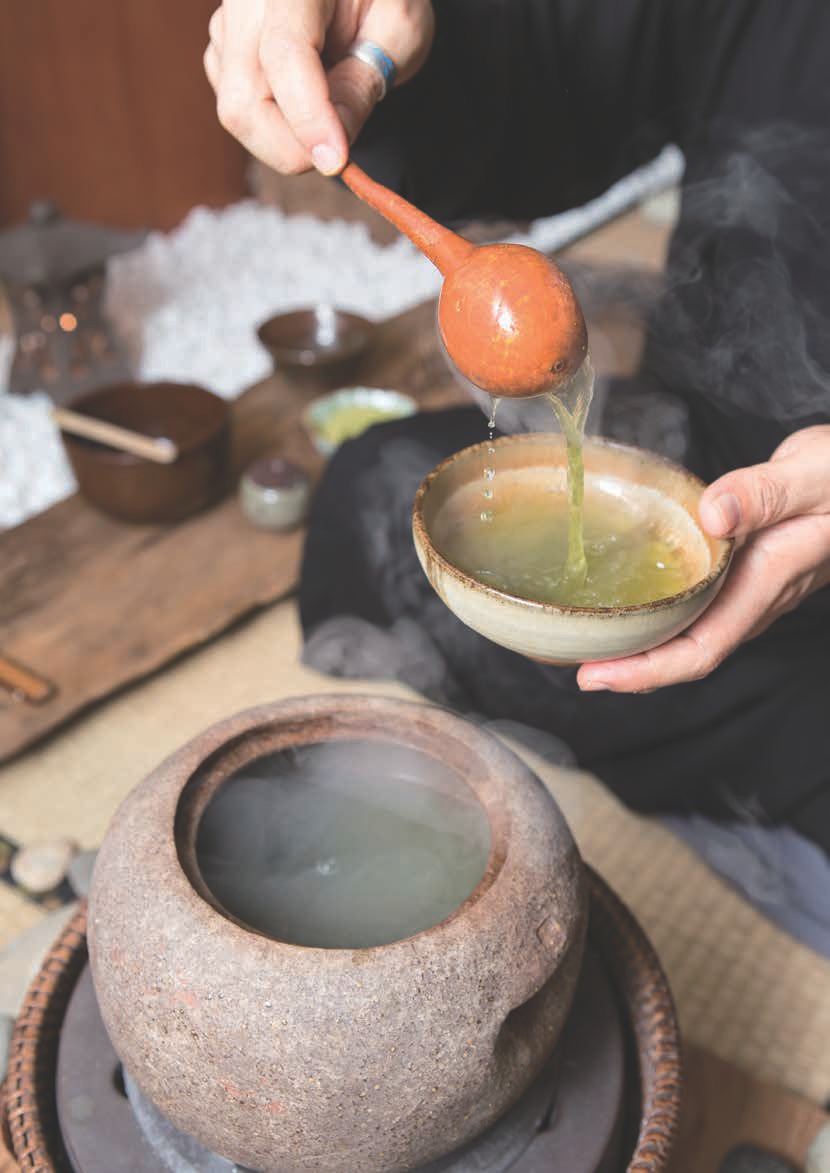