So much work has gone into the translation of the Cha Jing that follows these notes. We would like to bow deeply, with palms together to Michelle Huang, Joyce, Wu De and all our editors that have worked so tirelessly to make this happen. A few comments about the book, and this translation, will facilitate a greater understanding of the work.

The Cha Jing is the most important book on tea in all the vast history of China. In Asia, great works and their authors are revered with such heartfelt devotion that generation to generation their status grows, until eventually Lu Yu is a god of Tea worshipped by farmers and merchants of the Leaf throughout the empire. For its influence alone - for the thousands of cups and bowls raised to Lu Yu, and for these very bowls we drink from, each a heritage and legacy of Master Lu's own bowl - for this alone, we who have heard the call of this same plant spirit should read the Cha Jing fervently and with the respect it deserves.

But of course there is more in the Cha Jing than nostalgia for its influence on the history of tea. There is also a lot for us to learn, though it may seem otherwise. However, relying too much on the words of the ancients betrays the experiential simplicity of a tea practice. There is so much that has changed since Master Lu's brush touched paper: tea is processed so very differently, and we have access to a much larger variety as well. Also, our brewing methodology has evolved. We can't truly prepare tea in the specific way Lu Yu would have us do, for there isn't such tea around anymore. Furthermore, Master Lu himself learned through decades of practice. The tea was in his hand and in his heart, not the characters he wrote. So what part of the Cha Jing is applicable to a modern life of tea?

The first of many glories in this ancient book is that through it, we look out a window onto the many, many tea sessions that informed it. Before there was a Cha Jing, there were thousands of tea gatherings. And though the masters of Lu Yu's day are dressed differently, with different utensils and movements, the same grace and reverence inspired by the same plant spirit flows through the ceremonies we share today. The Cha Jing is like one of the bottom layers of an old palimpsest, with each generation of tea painted on the next. And though Master Lu's world is so far gone, there are many before him as well. Reading the Cha Jing is for me more about being around these old tea men, basking in the ambiance of earlier tea spirit. This reminds me of just how ancient, deep and profound a practice this is! As I read, I feel like I am drinking modern tea from a Tang Dynasty bowl - every crack stained with a thousand, thousand sessions.

There is also the reverence, mindfulness and devotion that pours through Master Lu's writing. At first glance, he may seem narrow-minded in his approach to the "right" way of brewing. But he himself says later on that all this can be abandoned when one is out in Nature, contradicting any conceit by admitting that he enjoys simpler tea out in the mountains. And of course he did! His refined brewing style wasn't preaching a view or perspective on tea, but rather the product of decades of experience and research, listening to Tea and the way She wanted to be prepared and honored. And that itself is a worthwhile lesson, for in it Master Lu is implying that we should do the same; that reverence and a true desire to listen to the spirit of the Leaf are the true measures of proper brewing.

Aside from the many other gems that decorate this glorious work, there is also the theme of Nature and harmony that pervades all Tea, then and now. Master Lu often mentions adulterating tea, and how improperly grown tea can make one ill. He also promotes frugality and moderation, for when one sees tea as medicine, one need not consume so much. Tea is indeed "A magnificent tree growing in the South." Like the first line of this and other ancient Chinese scriptures, there really is not more to say. 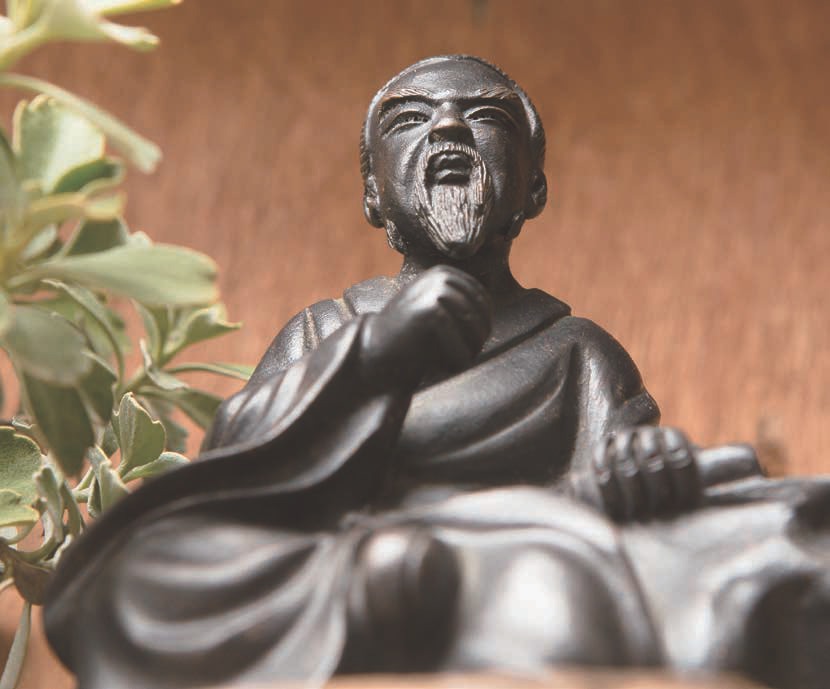 We plan to refine this translation and publish it in book form with commentary on each individual chapter, as well as some more ideas for how you can brew tea the way Master Lu did, or as close as possible. For now, let us turn to a few notes about this particular translation, before leaving you to the work itself. May it inspire your tea journey!

Note on the Translation

Master Lu's work is very difficult to translate. Ancient people valued words much more than we do, for their power and grace, and therefore used them more sparingly. Carving on bamboo or stone, or ink brushed to paper all cost more to an author - in time, energy and money as well. The old ones, therefore, left a lot unsaid. This, of course, wasn't just economically motivated. They wanted the reader to be left with mystery and gap, spaces that point off the page like calligraphic twirls at the edges of Chinese characters. Master Lu knew that most of Cha Dao is in the bowl, not on the page; and that the words could, at best, but point towards that spirit flowing from Nature into the Leaf, into us. Daoist sages are renowned for hiding their meanings, so that only the earnest seeker who truly practiced and explored the work would find its essence. It's as if it was all written in the sloppy, grass script calligraphy - the kind even a Chinese scholar has difficulty reading.

Due to the terse, deeply poetic and profound writing style, the Cha Jing is extremely difficult to translate. In Kakuzo Okakura's amazing Book of Tea, he says that "Translation is always a treason, and as a Ming author observes, can at its best be only the reverse side of a brocade..." Indeed, this translation is but the coarse underside of a glorious and intricately beaded brocade that depicts splendid scenes of Nature, water, fire and tea - and we can but see a faint and upside-down reflection of it by looking through. Any and all misleading information, mistakes or awkward phrasings are ours and ours alone. Please lay only reverence at the feet of Master Lu.

The 1974 version of the Cha Jing translated by Francis Ross Carpenter is a wonderful supplement to the following version. Mr. Carpenter approaches the work with a much more florid and poetic pen. Since such a poetic version has already been printed, we decided to take a bit more of a literal tact in translating the work, including a lot of footnotes with historical references that may or may not increase your enjoyment of this seminal book.

This translation is therefore in no way complete. I can remember my first class on the Dao De Jing in college. On the first day, no one had come with any of the books that the bookstore posted that we needed for the course. And before every single hand in the lecture hall went up, the professor giggled and said, "I know what you are all going to ask... No, there wasn't a mistake. Yes, you will buy fifteen versions of the same book! And for good reason!" Later, we all realized that there was a very good reason for having so many versions, since each could add another perspective to learn from. And no amount of perspectives could exhaust the wisdom of the Dao De Jing. The Cha Jing is much the same. However modest an attempt this may be, let this translation be a part of a growing body of translation and commentary, reviving Master Lu's work and spirit and steeping it amongst our own leaves!

Besides taking a more literally path towards translation, we have also tried to preserve as much of the Chinese as possible, weaving it into the work. We hope that this will help tea lovers take a step towards Lu Yu's original. It is worth basking in as much of the original essence as possible! 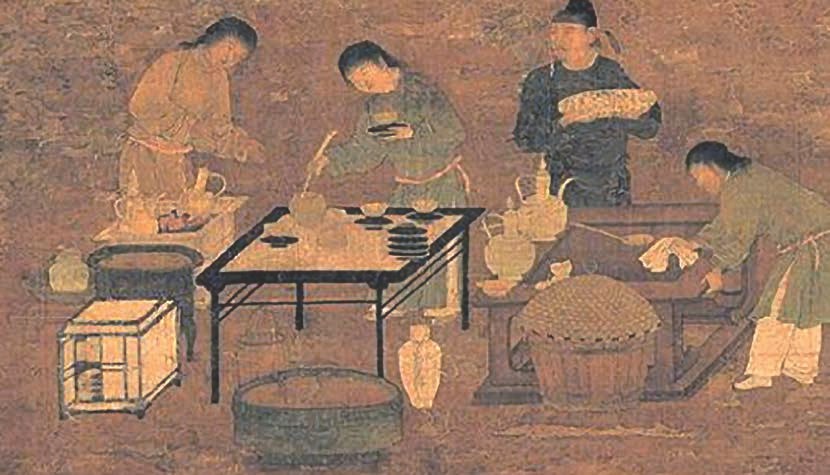 In the spirit of adding to different understandings and perspectives on this profound work, we have translated "jing" as "sutra". "Jing" is usually translated as "classic", like the Dao De Jing which may be translated as the "Classic on the Way and the Power of the Way", for example. We aren't arguing that "sutra" is a better translation than "classic", but rather that "classic" is incomplete and adding "sutra" to the definition of "jing" helps clarify aspects of what this word means.

Calling a "jing" a "classic" is fine now that they are antique, but many such works were given this title as and when they were finished. One could say that, as such, the title was honorary, meaning "this will one day be a classic", but there is still some deeper meaning left in the word "jing" that the word "classic" does not capture. To touch on these, we have to turn to Buddhist scripture.

The great Buddhist saint, and most profound and famous of all Chinese translators, Xuanzang (602 - 664 CE), himself traveled on a great journey to India and brought back thousands of Buddhist scriptures. This Tang Dynasty legend established the long-standing tradition of the five categories of terms that were considered "untranslatable": those with secret, esoteric meaning, those terms that have multiple meanings, names of things that do not exist in China, customarily used terms, and terms that have deep and profound meanings. For these, the Sanskrit would be imported and learned. But why is this relevant?

Despite the fact that the word "sutra" has multiple meanings, esoteric connotations and is deep and profound - satisfying three of the five criteria for being untranslatable - it was still translated to "jing". The very same "jing" in the Cha Jing, often translated as "classic". Why? Because the word "jing" satisfied so completely all the many and profound meanings of the word "sutra", so that the scholars felt it was worth translating. "Sutra" literally means a thread or line that holds/sews things together, as scripture was probably bundles of leaves or paper sewn together in ancient India. But the meaning is also deeper and not just literal: a "sutra" is a rich and pithy writing that is meant to transcend its time, and carry a profundity way beyond its words, which is also a kind of thread - "the thread that runs through everything." And, as it turns out, the word "jing" has all these same meanings within it as well. The character "jing (經)" is composed of two radicals: on the left is the radical for "silk thread" and the radical on the right means "stretching", "penetrating" or even "path", as well as "unchangeable" and "scripture" (the last meaning is the closest to "classic"). That the "thread" of a "jing" is silk, further weaves the word into Chinese history and heritage.

Since the word "sutra" has become commonly adopted in English, we feel it is a nice addition to translations of Chinese works. Though not a replacement for "classic" - since such works are, indeed, classics - "sutra" restores the reverence that the word "jing" conveys. To us, "classic" is a bit too profane a translation, lacking the spiritual context and feeling that the Chinese character expresses.