A lot of black tea that is fermented post-production will develop various kinds of mold. Sometimes this is a bit scary to Western tea lovers. But there's no need to be put off by certain kinds of mold in tea. Many of the molds in fermented teas are medicinal, and sometimes even sweeten the tea as well. No mold is as coveted or as rare as the elusive "Golden Flowers" that you sometimes find in black tea. 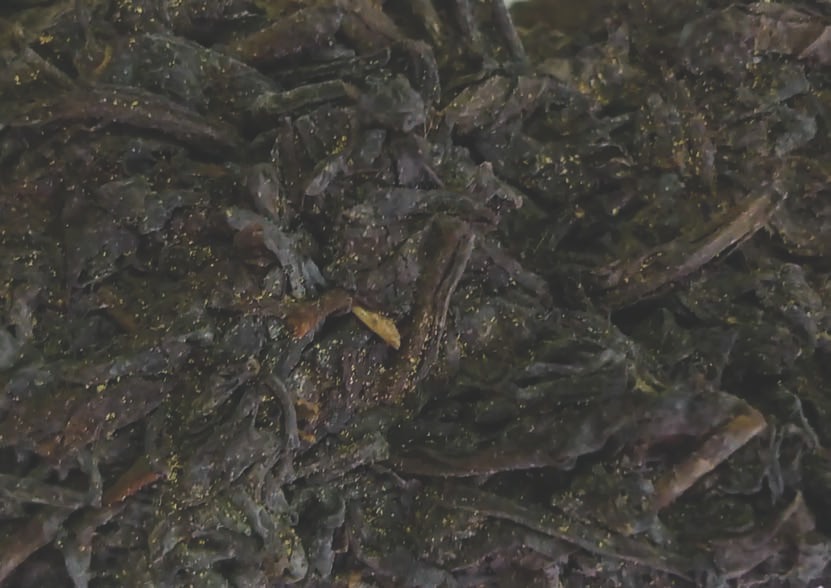 Some of the magic of post-production fermentation isn't in the tea leaves. Scientifically, little is known about many of the molds and bacteria that arise naturally in fermented teas like puerh, Liu Bao and other black teas. Most of these teas grow in humid areas, so molds, fungi and unique bacteria are present in and around the trees. As the tea is fermented, each cake, brick or batch of loose tea will be different. Even sheng puerh, aged naturally over time, is susceptible to mold and not all of it is bad for us. When it comes to black tea, Chinese people have always determined the quality of many teas by how much "Golden Flowers (huang jing hua, 黃金花)" they have. This is especially true of the brick teas of Hunan, where such mold is most desirable. In fact, Hunnanese brick tea is intentionally fermented in conditions favorable to this mold, and any brick without it is considered lower quality. Traditionally, Liu Bao tea was not characterized in this way, though it is sometimes found with this mold on it. For some reason, this particular mold very rarely grows on puerh (aged sheng or shou), though puerh has many other kinds of molds and fungi.

Also known as Eurotium Cristatum, most of the golden bunches are actually spores. In recent times, black tea has started to grow in popularity and some Liu Bao and Liu An teas are also fermented under conditions that promote Golden Flowers. There have been medical studies in China suggesting that Eurotium Cristatum can be effective in treating diabetes, promoting metabolism and used as a digestive aid, and even potentially assisting in the treatment of cancer patients. Though Golden Flowers have been used medicinally in China, Mongolia and Tibet for centuries - where most brick black tea was exported to - further research is still needed.

Beyond the more scientific approach to health, we would also like to offer a different approach that focuses on trusting our bodies, Nature and life, looking to our own connection to our self and plant medicines instead of waiting for a lab report to tell us what is going on inside of us. Perhaps the combination of these approaches results in a more holistic health and healing.

There is some debate about the molds that develop in fermented teas like puerh and black tea. There aren't any known cases of mycotoxins in these teas, but the possibility is there. Some white spores on puerh tea will give it a musty flavor, which people may or may not appreciate. Traditionally, most all aged puerh was musty, having been stored in Southeast Asia. The tea wasn't as valuable as it is today, and was often left to age naturally, with little human intervention. As puerh has increased in value, however, tea lovers are more concerned with how their tea will age, putting more effort into controlling the storage environment. In the future, we will be able to share more experiments and results, as tea is aged in new environments around the world, some conducive to better aging and some not so nice.

Although many people think of mold as bad for us, it isn't inherently so. Our bodies are full of microorganisms. We need them to survive. There are bacteria all around and throughout our bodies, and by number they account for the majority of cells in us. While we find that the presence of certain white and yellow molds on aged sheng and other black teas enhances their Qi, and in the case of Golden Flowers makes them sweeter, we aren't doctors and wouldn't recommend using this tea to treat any illness. You need to take responsibility for your own health, consulting physicians, Western or Chinese.

Putting aside disclaimers about how we won't be responsible for your health, we drink such tea a lot and it is great. As we mentioned above, there are no known cases of mycotoxins released from Golden Flowers - to the contrary, there are several studies promoting their medicinal benefits, Western and Chinese. Also, there is research which demonstrates that the molds and bacteria in most teas are mitigated by the temperature of water used in tea preparation.

There is a magic in the relationship between the millions of microorganisms in fermented teas and our bodies. This is a big part of what makes puerh and aged teas, like this month's Liu Bao, special teas. We have talked here a lot about the scientific aspects of these molds, but we should also recognize that it is hard to say how much of the Qi in any aged tea is from the leaves and how much from the microorganisms. Without humidity, puerh and black teas don't ferment. The changes they go through over time are related to the presence of bacteria, itself the defining characteristic of fermentation - in anything from cheese and yogurt to kombucha. 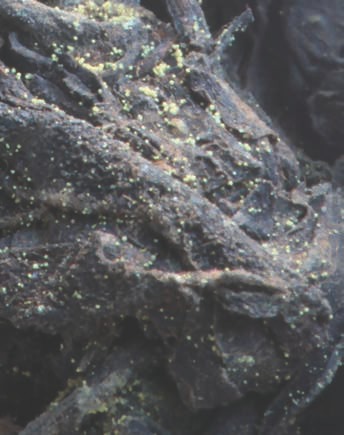 The mold adds a deepening to the Qi, making it more Yin, while sweetening the tea, bringing a longer-lasting aftertaste. Microorganisms - molds and bacteria - are part of what makes tea and the world alive. We have Liu Bao teas from all different ages, some of which are fifty or sixty years old, some from the 1980's, 90's and early 2000's. Very few of them have Golden Flowers, so count yourself lucky if you find one! This month's tea has little to no Golden Flowers, as Malaysia is not really humid enough to encourage them. Still, learning about them is a part of understanding black teas like Liu Bao.