Each month, we introduce one of the Global Tea Hut members to you in these magazines in order to help you get to know more people in this growing international community. It's also to pay homage to the many manifestations that all this wonderful spirit and Tea are becoming, as the Tea is drunk and becomes human. The energy of the Tea fuels some great work in this world, and we are so honored to share glimpses of such beautiful people and their Tea. This month we would like to introduce Jesse Örö. 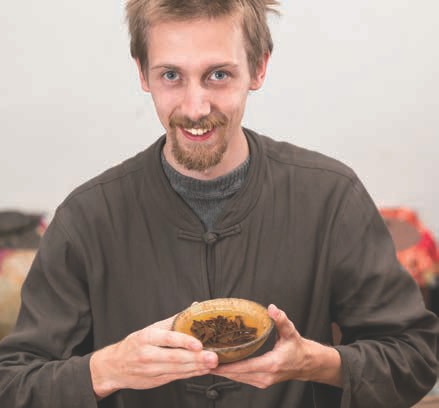 The first cup of tea I had was a Twining's tea bag. My second was a whole leaf Darjeeling, and that contrast of quality put my eager mind on a path of tea-geekiness. Thus my tea hobby started with analytical tasting sessions on my own or with a few other enthusiasts. I am a very intellectual person, so tea was a fascinating challenge. There was a huge amount of information to learn, and the sources were full of contrasting opinions. So the hobby was very difficult to progress in, but also very exciting.

Maybe a year after my first two cups, I was sitting in the home of an esoteric, modern shaman. This dude was brewing a tea he called "the Purple Lady," using big coffee mugs as improvised gaiwans. His words about Qi were something alien to me. However, after a few gulps of that tea, they started to somehow make sense. I felt the Qi. It was as if tea had been black-and-white to me before this tea, whereas this one was in full color. Later, every once in a while, I encountered something similar, but it was rare. Over time, all tea started to be a more holistic experience. Some teas didn't taste very interesting or complex, but there was something else to them, which made me savor them even more.

In Finland, there is a surprisingly large community practicing Japanese tea ceremony. I was more drawn to Chinese and Taiwanese teas, so I went to their beginner's course mostly out of curiosity, and without expectations. I learned a new way of approaching tea. I used to think that drinking tea alone was superior, without any peer pressure so I could stay more objective. For these Chajin, tea was primarily an act of sharing. My time there was quite short, but their attitude and aesthetics affected me. Many Westerners seem to regard whisked tea as nothing but a set of complicated rules, though actually, underneath the rules, lies something very simple and beautiful.

Some time ago, I met a new bunch of tea people in Finland, and one of them had just become a Global Tea Hut member. Leafing through the magazine convinced me to give it a try. I had the mentality of a customer at first, like I was ordering a product which was worth the price. As you know, these pages house a lot of information, and the teas are very high quality as well.

My first visit to the Tea Sage Hut was a very short one. I wanted to see the place and the people and form an opinion about the operation. I saw a lot of similarity with the spirit of tea I'd touched upon in Finland. Later, Wu De visited Finland, and stayed in my home for a night. Having somebody as your guest changes something. I think that's when I ceased being a customer and started to be a member. When I visited the Tea Sage Hut for the second time, I stayed a week. As I'm writing these words, I'm staying for a third two-week stint.

Today, Tea is present in my life on many levels. Often, She is the center of my attention, and at other times the background. Tea is starting to feel something familiar and cozy to me. Maybe our relationship has matured a bit. I love having tea by a forest spring or sharing tea at home after a busy day. But I have to admit, when Wu De starts to speak about puerh mountains, tea cultivars or processing methods I still listen particulary carefully - I'm still a tea geek as well!

Welcome to share some tea with great spring water should you find yourself in Finland!