We interrupt our regularly scheduled gongfu tea tips to try our hand at Song Dynasty-esque tea. We took this month's tea and ground it from scratch, hoping to raise a bowl to the emperor before we start our journey into his world, a froth that he'd deem worthy. 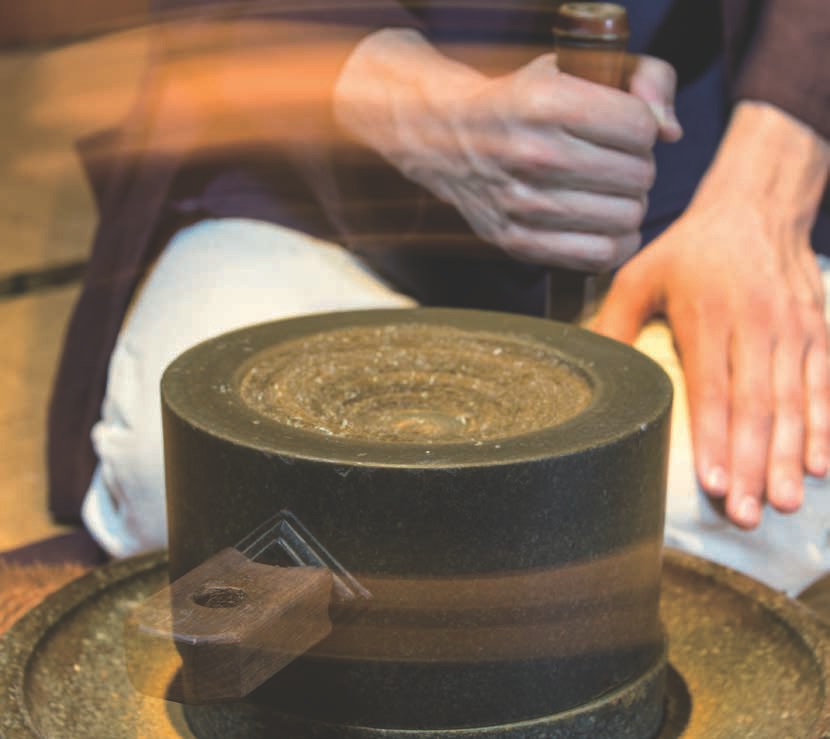 We had to take a break from gongfu tea tips this month and try our hand at whisking tea Song Dynasty style. And since brewing tea à la Lu Yu last September was so much fun, we were enthusiastic to recreate the experience of the emperor's tea this time and do so from scratch. Of course, we can't really replicate Song Dynasty tea, as the tea nowadays is grown and processed so differently, but we thought we would have some fun and raise a bowl for the emperor. Maybe some of you might want to try something similar as well.

We have an antique tea grinder, originally from Japan, here at the Center. We have successfully ground many kinds of tea - from aged oolongs to Five Element puerh, red tea to shou puerh. Some of you have experienced whisking or boiling this precious tea. The process of grinding takes a long time - up to five hours, in fact. We always try our best to surround this process with sacred intention; listening to chants, we take turns grinding in silence. When it's not our turn, we practice loving-kindness mediation to fill the tea with positive energy. Our results have been excellent so far. The Five Element puerh powder, for example, is cosmic. 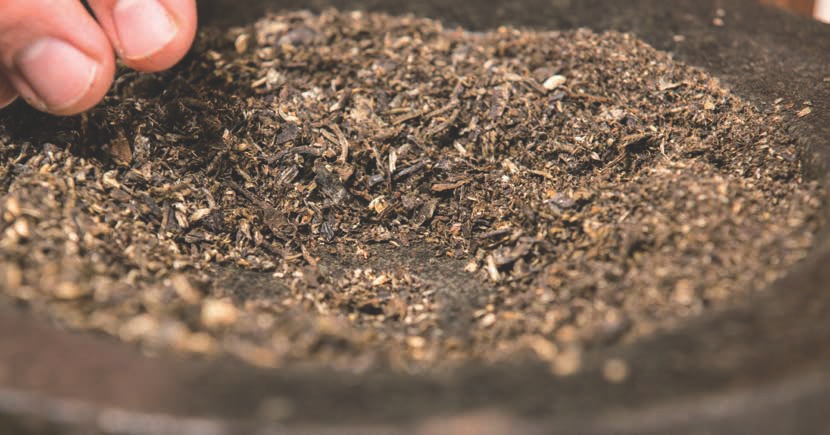 For this experiment, we wanted to try grinding this month's white tea. We have tried Fu Ding white tea before, but the thick "Silver Needle" buds are too fibrous. The powder was almost meshed and didn't whisk very well. However, this month's Moonlight White is made up of as much leaf as bud, and so it ground down into a powder very nicely. Unlike previous grinding sessions, we also asked the guests who were participating to think of the emperor Huizong and hopefully instill the tea powder with some nostalgia to make up for all the many ways that our tea is different than the cakes that were ground in his time. We started in the mortar, grinding and de-steming, before moving to the stone grinder. Of course, we'd need to let the tea sit for a few days before drinking, as we always do, so that it can calm down after the grinding. 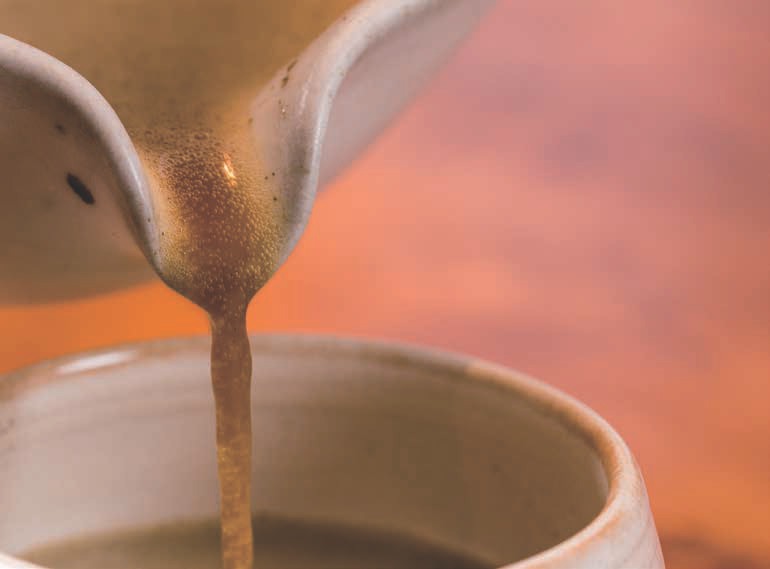 We have admired the Song Dynasty-esque water vases/ewers that are sold at Lin's Ceramics in Yingge for many years, so we were excited to have an excuse to finally get one for the Center. Usually, when we brew whisked tea, we do so formally in the Zendo in a Japanese tea ceremony fashion. However, we designed a more casual style of whisked tea for the Main Tea Hall that we thought would be better suited to trying this month's tea ground. We even had a matcha bowl with a spout made a few years ago. We whisk the tea in this and then decant it into five special bowls that I brought from Japan many years ago. The bowl was designed to match these cups, in fact. This is a nice way to share some whisked tea without spending so much time like we do every Saturday, which is devoted to Japanese whisked tea. (A more formal ceremony takes several hours to set up and clean up afterwards.) Also, we hadn't used the water vase before, and we wanted to try following the emperor's instructions for whisking the tea. The emperor suggests a heavier whisk made of old bamboo. The whisks in the Song Dynasty were shaped differently, so we used our thirty-year-old one as the next best thing. 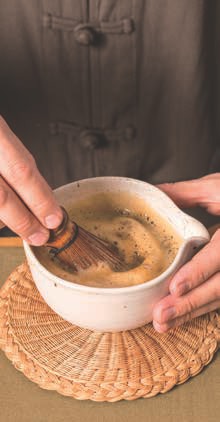 We have tried using seven gushes of water in the Song Dynasty fashion and found that this does in fact create a creamier, smoother bowl of whisked tea. In a formal whisked tea ceremony, we usually add three ladles full (hishaku). But this was the first time we had ever tried the specifics of the emperor's method. After rinsing out the teaware, we added some tea powder to the center of the bowl and waited for the water to boil. When it reached crab's eye, we transferred it to the gorgeous celadon water vase. We poured gently and slowly around the rim, as the emperor suggests, adding just enough to turn the powder into a paste without disturbing it. As with most things, he suggests perfect balance - neither letting the paste sit too long nor not long enough, which makes brewing very challenging. But we're used to such Daoist allegory in gongfu brewing. So when it felt right, we started whisking in ever-widening ellipses. When the first foam appeared, we poured in the second stream in a circular fashion. The emperor says that this stream is not poured around the rim, but quickly into the tea, which we tried. We then increased to a more powerful whisking, circling and then chopping in intervals. At that point, we added the third gust of water, which he says should be more water than before, and followed it with gentle whisking. We used our third method of whisking, which is to gently rake the tea up and down. After this, the emperor suggests a fourth, tiny gust of water. We poured this one from on high, to increase foam. The liberal fifth shot of water came next. We tried holding the whisk more loosely at this point, moving it all throughout the bowl as the emperor instructs. "If there is any place that the foam is too thin, the master will whisk in heavier strokes throughout that area." We searched and thickened the foam. We poured the sixth gust into the place where the foam is thickest, churning one last time to congeal the foam. We usually add a tiny seventh gust of water, but decided to leave it out this time, as the emperor's sentiment seemed poetic, honoring Lutong. 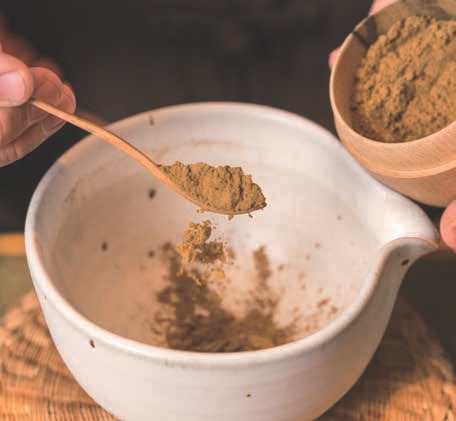 The resulting cups where very blissful. The tea was thick and creamy, with deep and powerful flavors that rolled and changed, with a musky aroma that arose in the back of the nasal cavity. The energy was uplifting. We felt transformed, looking around at eyes that seemed to be emerging from a much longer meditation retreat. All of the care in grinding this tea and the spirit of the emperor's time lent a certain magic to this session. We set a cup aside for Huizong, hoping that he knows that Chajin still admire him!

Some of you will no doubt want to try some Song Dynasty tea at home as well. You don't necessarily need this whole complicated process to do so. Of course, you are welcome to grind this month's tea the way we did, but even otherwise, some matcha will do. And you could use any pitcher rather than a Song Dynasty-esque one like we did. In fact, even your kettle will do. We think that much more of the richness of this type of brewing experience lies in following the emperor's whisking instructions anyway. Try adding water and whisking in the way described above. (You might want to read the emperor's words, as well.) You can then drink right from your matcha bowl, as opposed to decanting the whisked tea the way we did. Set a bowl or cup aside for the emperor, as he was a true Chajin indeed!

Go online to our discussion board on the website and share your findings with the whole community. We would love to hear from you!