In May, all of this year's tea is flushing its last, and tea farmers around the world are either finishing up their processing, or in the midst of sleepless weeks as they struggle to work at the pace of the Leaf. Their lives over the next year will revolve around what happens over the next weeks, as will ours - the tea lovers who are destined to receive the tea they work so hard to produce. May is a time to honor the artisanal farmers who craft our leaves, and recall that tea is one of the most labor-intensive agricultures on Earth, with up to a fivefold reduction in drying. That means twenty kilograms of raw leaf become four kilograms of dried tea! May is also a good time to reinvest our hearts in sustainable agriculture, towards tea that lasts into future generations and is good for the Earth and us equally.

We are working hard on the website. It is going to take some time, though. As we discussed the project with web developers, we realized that it would take a few months to complete, as our goals are ambitious. We plan to fund the new website using three months of gifts, but since it may take more than three months to complete, we thought we would space out the months that are contributing to that project, so gifts will be intermittent over the spring and summer. But it will all be worthwhile when you see the amazing site, and hopefully start using it to host and attend tea sessions locally, as well as to visit with other Global Tea Hut members when you travel.

For our special Extended Edition in September of 2014, we covered puerh tea in all its facets. It was one of the largest sources of information on puerh ever published in the English language! At the time, we knew that we would one day devote a whole issue to each of the seven genres of tea. In March of this year, we covered red tea. Since spring is officially here, we thought we would take the time to explore as much about green tea as we can. In the future, as Global Tea Hut matures, we will publish hardbound compendiums of similar topics like the Seven Genres of Tea, our translations of the Classics of Tea and other books. Some of you have expressed that it would be nice to have hardcover copies of Global Tea Hut issues together.

Nothing heralds the change in weather quite like some fresh green tea. In ancient times, the official start of spring was marked by the emperor's first sip of the first flush of green tea. Let us similarly raise a cup of green tea and welcome the brighter sun and warmer weather. Green tea is light and fresh, and uplifts us. It cleanses. Like a lot of green teas, being so simply processed and lacking pretension, this month's tea enjoys being made in the oldest way: leaves, heat and water in a bowl. Now is a good time for washing away the past and starting an outward period of growth!

I tend to feel nostalgic when I drink green tea. It takes me back to other times; it uplifts me and encircles me in its gentleness and simplicity. Green tea, to me, is an embodiment of light, and drinking it is a communion with the season. I feel it filling the cells of my body, I hear it singing through my soul and my spirit joins in its playful, gentle dance. Green tea is playful, and it reminds me of a time when sunbeams inspired me to play with them, or the way light dances at the bottom of a clear pool of water. I love to drink green tea in a bowl when the weather is warming up. The simplicity of it reminds me that I am alive. 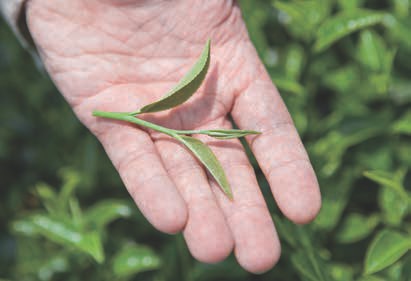