Spring arrives with green tea. Green tea is one of the purest kinds of tea, and the least processed. It is often a Chajin's first love - the tea whose aroma carries us to the places where names like "Temple Mist" and "Dragonwell" make perfect sense. Green teas often taste of such vistas as well, recalling clear stream water singing over stones, forest pines, or sometimes the lightest fragrance of a flower caught on the breeze, though not for long enough to identify... There is a magic in these light aromas, and in the uplifting Qi that often sweeps us up off our cushions. Sometimes it is nice to return to our roots, remembering Nature through perfect fragrance. The freshness of green tea also reminds us of the weather, though it can also be great when it is aged. Let us all celebrate the poetry of tea fragrances this month, as we stray into old dreams of bright leaves floating around a cracked bowl...

The official beginning of spring in ancient China was the day the emperor sipped the first cup of the first flush of green tea, heralding the arrival of the new year. Preserving the freshness is the key to all green tea processing. This is done by altering the leaf minimally. The two most important aspects of green tea production are to reduce the withering/oxidation as much as possible and to shape the leaves in a way that suits their nature, color and fragrance.

Green tea is lighter than other teas because the processing is minimal. Plant cells have thick walls, and so without cellular breakdown, the tea does not release as much of its essence. It is impossible for tea to be processed without some oxidation; it begins oxidizing the moment it is picked. Also, the water content of fresh leaves is too high to process. If you fired or shaped such tea, it would break, being brittle from the water in the leaves. During the trip from the field (or forest if it's living tea) to the processing area, the tea naturally withers, losing moisture and becoming soft enough for processing. Ideally, green tea should be processed quickly, on the same day as plucking.

Traditionally, the best green teas were made from buds only. It takes tens of thousands of buds to make one jin (600 grams) of tea. The buds can also be processed with less oxidation, retaining more of the essence of the fresh leaf. They are also young and Yang in energy, which contributes to the magic of green tea. Over time, a greater demand for green tea has led to many kinds of green teas that are combinations of buds and leaves, or even just leaves. In many instances, such blends or leafy green teas are inferior quality. But as green tea has gained popularity, more regions are producing it and using many different varietals that weren't traditionally used in green tea production. Sometimes, depending on the varietal and terroir, a leaf-bud blend can actually be better than just buds, adding depth and Qi to a particular green tea.

Though green tea began in China, it spread to both Korea and Japan by the tenth century. These three could be considered the homes of "traditional" green tea, which is why we choose to cover these three in this issue. There are many ways of processing green tea - based on local varietals of leaf and terroir - especially if we include the mastery of tea production handed down from generation to generation within the umbrella of "terroir." Remember, "terroir" is a French word that is generally used in discussions of wine, but it is so applicable to tea as well that most tea lovers have adopted it into their discussions of the Leaf. Terroir denotes the special characteristics of a place, found in its geology, geography, climate and even cultural heritage, which interact with a cultivated plant species to create unique expressions. Terroir is the soil and weather of a particular region: the geography and culture of the people and their relationship to the plant, and even the local microorganisms. Every place has a unique soil composition, pH, mineral content and climate - all of which create a distinctive tea.

When we talk about a tea's "terroir," we are speaking of the unique environment that created it, one which couldn't be reproduced elsewhere. Even if you took a grafting of a tree and cloned it elsewhere, it wouldn't be the same since the sun would be weaker or stronger, the soil composition different, etc.

Green tea is most essentially defined by a lack of oxidation. The aim is to arrest oxidation as quickly as possible and thereby preserve the freshness of the tea. Green tea is picked and then goes through some form of heat to arrest oxidation. This could be steaming, baking, or most commonly, pan firing. It is then dried. If the green tea has leaves along with bud, then, after firing, it is rolled/shaped before drying. The rolling shapes the tea. The rolling for a green tea will always be significantly less than for other teas. All-bud green teas are not rolled, however. They are shaped in the pan. Sometimes the firing and rolling will be repeated a few times until the desired shape/color is achieved. The liquor of green tea can be clear to yellow or even vibrant green, depending on local variations. The Qi often enters the body through the aroma.

Whether the green tea is all buds, bud-leaf sets or just leaves will also determine how it is processed.

The basic kinds of traditional hand-processed green tea are: pan fired, basket fired, oven baked and steamed. With the introduction of modern machinery, however, many of these steps have changed. Pan firing to arrest oxidation and de-enzyme the tea, for example, is often done in large, heated tumblers nowadays. Steaming tea is only done in Japan, which is how they arrest oxidation/de-enzyme their tea. The result is the dark green color of Japanese teas, as well as the bright green liquor and distinct flavors such tea offers. 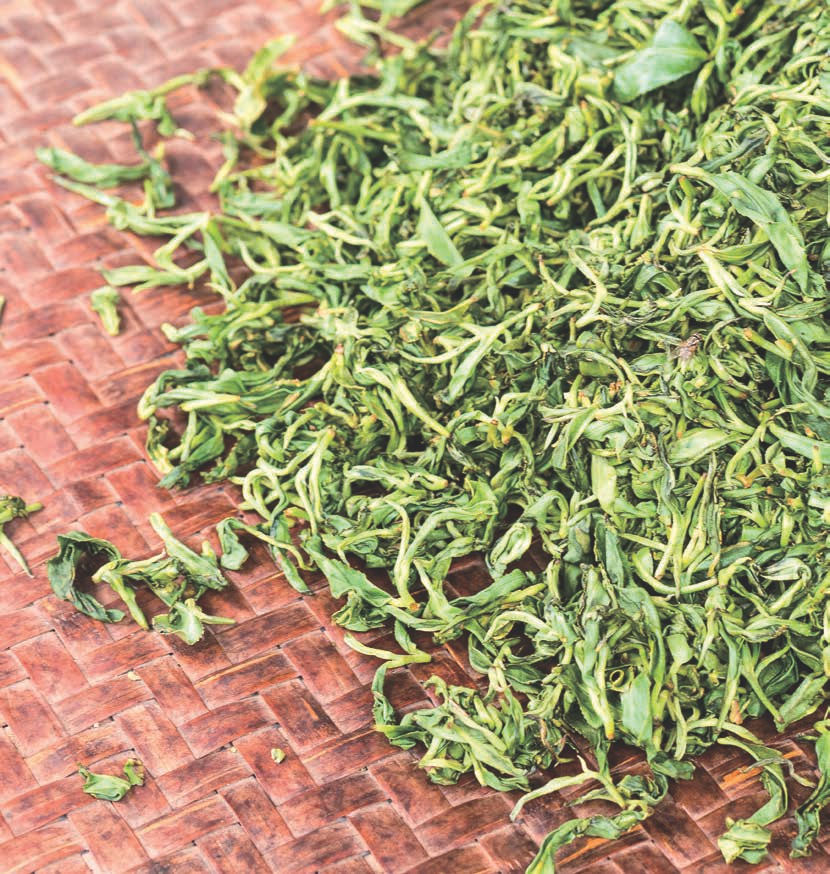 Great skill is required to process green tea, since it is so simple. Sometimes we assume that mastery is in the more refined of the arts, but it is often the simplest things that take the greatest effort and skill. Great chefs don't need to cook with tons of spices all the time; they can also bring out the natural flavors of ordinary ingredients in unexpected ways. We once had a vegetarian chef stay at the Center and he cooked up the carrots we eat regularly, only they tasted somehow more "carroty" than usual! They were delicious. And it was carrots, oil and salt - nothing else! Similarly, green tea at its finest is an expression of simple tea leaves as they are in Nature: bitter, astringent, with a transforming sweetness that lingers on the palate. And the simplicity shines when a green tea is good, like ours this month!

In the Chinese lunar calendar, Qing Ming (清明) is an important holiday. People pay a visit to their family tombs and clean them up before making prayers. It usually falls on April 5th each year, though it wavers like the moon. The highest quality spring green teas are often Pre-Qing Ming (明前茶). The leaves that sprout just before this time are more tender and sweeter, often with less bitterness and astringency. For that reason, they are valued in the market as the highest grades of green tea. The next highest grade is that which is produced a couple of weeks after Qing Ming, which is called "Pre-rains tea ( 雨前茶)." The buds from this flush are also often tender, but not as tender as Pre-Qing Ming teas.

With climate change, agrochemicals and other human influences, much of the meaning and premium of "Qing Ming" is lost nowadays. Even leaving aside the many fakes, different regions have very different terroirs, which means different qualities of tea. Also, what is valued by the mainstream is often based on different standards than the tea lover has. Sometimes we value the energy (Qi) of the tea more than the flavors, especially when viewing tea as medicine. And all of this does not take into account the changes that have started due to climatic fluctuations and agrochemicals, especially chemical fertilizers, which change the time and manner in which tea bushes flush with buds. 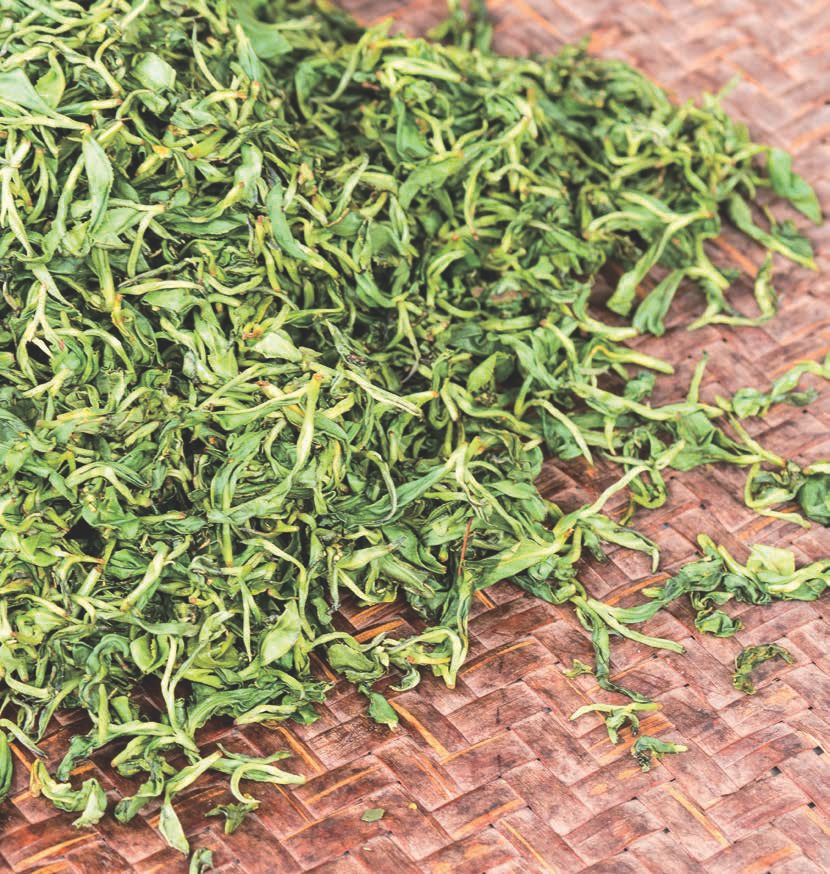