During our time in Yunnan, we shared tea ceremonies together as a group and amongst ourselves a few times when we had breaks in our full travel schedule. As we've discussed in previous issues, every tea session is a beautiful and unique chance for connection. These sessions were no exception - we shared a deep peace and bond in each one. One of the highlights of our previous trip in 2014 was when Auntie Ai made traditional Ku Chong tea for us, so we were excited to have her prepare it for us again. She agreed, mentioning that back in the day such tea was always served to important guests or guests from far away - a tradition she lamented losing.

Auntie Ai appeared in stunning traditional garments bearing some yellow-hued rice, chunks of jaggery-like sugar, pine resin and a bowl of sheng puerh leaves. The previous night, we had been treated to a beautiful Ku Chong dance, though this night would also prove to be one of the highlights of our stay in Ai Lao.

Auntie Ai is a member of the Ku Chuong ethnic minority. The Ku Chuong have inhabited Ai Lao since around the third century CE, and they are also found in nearby Laos and Vietnam. For about 1700 years, they have been interacting with local tea trees. Today, some still say prayers to the trees, leaving offerings at their roots. And some, like Auntie Ai and her family, still revere the trees and the deep soul nourishment they offer. During our short time in her town, she had already sung us songs about Tea. She had blended tea with adept skill and with more than a touch of artistry. And she had rolled tea with graceful ease and firm strength in perfect balance. Certainly, we were in for a treat.

Charcoal smoldering in the brazier, a slab of stone resting on its wire grill: the setup was simple. Auntie Ai spread the dry yellow rice on the slab. Its color, we learned, was from a local flower (just one of the many wild plants locals gather by hand to make their food powerfully nourishing and downright delicious). She spread the rice over the hot stone with a pair of wooden chopsticks, and then placed the pine resin next to it. She placed a simple clay pitcher over the coals. Into the dry pitcher, she dropped a handful of long, wiry sheng leaves to roast.

An aroma hinting at old trees and far older mountains curled out from the lip of the pitcher. She held the vessel out to each of us so we could savor this ode to nature, written in hot air only to disappear no sooner than it was created.

Next, she added another pitcher to the heat. The pitchers were amazing, and we talked of how they looked antique and rustic, streaked with the horizontal ridges of a potter's fingers as they met the gentle, rhythmic spin of a pottery wheel. She scooped up the grains of rice with her fingers and placed them into the small pitcher. Then, she shifted the other pitcher to the space she had made on the slab. With her chopsticks, she patiently stirred the rice as it grew increasingly hot over the coals. After some time, the grains began to puff and pop, like the toasted rice in Japanese genmaicha (only yellower, thanks to the flowers).

A sudden look of alertness flashed in her eyes - time for the sugar and pine resin! Using chopsticks, Ms. Ai swiftly took the russet-colored lumps of sweetness from a bowl and placed them gingerly on the hot block of stone. She poured the contents of the small pitcher into the large one, mixing together the roasted sheng and the puffed rice. Then, she transferred the hunks of sugar and resin into the small pitcher for more heat. After a few minutes, they began to bubble and sizzle softly, caramelizing in the heat as the rice and tea continued to roast. As she stirred, the dark brown sugar and resin began to melt into an even darker brown syrup.

The rice and tea were ready to brew. Auntie Ai grabbed a kettle of simmering water and poured it into the pitcher. She gave it a stir and then plopped in the melty nuggets of sugar and resin. She waited and watched closely as it boiled. Then, she arranged an army of white tea cups onto a round bamboo tray used for tea processing. She gave the brew a final stir and poured a small sip into each cup, apologizing for how little everyone would receive. We received the cups with thanks and smiles. 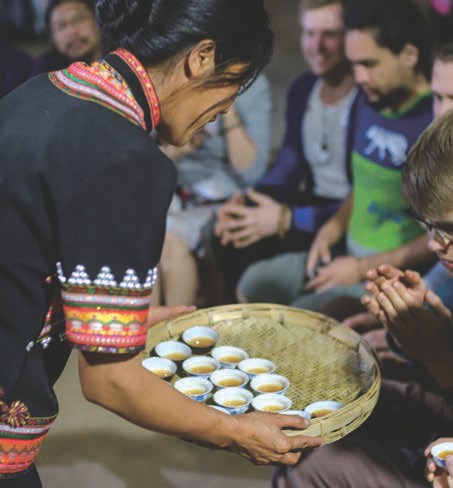 The liquor was rich and roasty, sweet and complex, and just as tasty as you might expect it to be. More importantly, it contained all the care and love that Auntie Ai had put into it, from the trees to processing the leaves, preparing the tea to handing us the bowls. And it contained all the tea sessions shared by her and her family, stretching back many generations. She wasn't just giving us homemade sweet tea. She was sharing a tradition that has been a part of her culture for hundreds of years, and sharing the love of tea and hospitality that has been a part of her people's tradition for all that time. She was giving a blessing from one tea tradition to another, and we were grateful to receive it. And while we probably won't start sweetening our tea with jaggery any time soon, I can only hope that we learn from and spread the spirit of Tea she shared with us that day. Perhaps the next time we serve you tea, you'll see a glimmer of Auntie Ai in us...